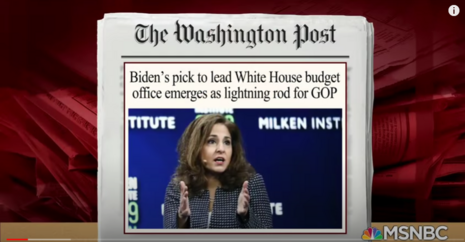 Veteran New York Times congressional reporter Carl Hulse and Emily Cochrane teamed to scoff alongside Democrats at Republican opposition to ThinkProgress chief Neera Tanden as Biden’s choice to fill the Office of Management and Budget: “Balking at Tanden, G.O.P. Signals Fight.” The position requires Senate confirmation, and control of that body is up in the air until January runoff elections in Georgia.

Hulse in particular has a history of defending Democrats and gloating alongside them at perceived Republican troubles, and he thoroughly enjoyed himself:

The fierce and pre-emptive Republican pushback against President-elect Joseph R. Biden Jr.’s choice of Neera Tanden this week to head the White House budget office underscored the difficulties the incoming administration will face in maneuvering its nominees through a polarized Senate.

In the 11 years since Mr. Biden served in the chamber, partisanship has intensified, and nominations -- once an area dominated by courtesy, comity and a presumption of accommodation -- have become just another brutal battlefield.

The text box to the story in Wednesday’s Times warned innocent Joe Biden, who served in the Senate for 36 years and dished out more than of his fair share of contempt toward Republicans, “Does Biden recognize the polarization he will confront?”

Republicans will not be eager to accede to Mr. Biden’s choices if they can find reason for opposition. And disparaging comments about Republicans on Twitter from Ms. Tanden, a longtime Democratic policy adviser and head of a liberal think tank, were enough for many Republicans to threaten the nomination well before it was made official on Tuesday.

Then Hulse and Cochrane really dug in to the Democratic talking points:

Democrats scoffed at the criticisms surrounding Ms. Tanden’s selection, particularly over her Twitter feed -- given that most Senate Republicans have diligently spent four years evading queries about the array of policy announcements, racist commentary and inflammatory attacks on their own colleagues from Mr. Trump on Twitter.

“After spending four years pretending that they didn’t see the latest insane tweet from President Trump, Senate Republicans seem to have found a newfound interest in the Twitter feeds of President-elect Biden’s cabinet selection,” Senator Chuck Schumer of New York, the Democratic leader, said on the Senate floor. “A few critical tweets about substantive policy positions have caused Senate Republicans to label Ms. Tanden’s nomination ‘radioactive.’ Spare us the hyperbole.”

Democrats also said they were astounded by calls from Republicans for extensive disclosures of business dealings from Mr. Biden’s potential picks after the record compiled by Mr. Trump.

“This is just stunning, even by the double standards of Washington,” said Senator Ron Wyden, Democrat of Oregon, who labeled the Trump administration “the Babe Ruth of darkness.”

The Times left out other Tanden Twitter controversies, as documented by Twitchy, such as the time Tanden signed on to the conspiratorial idea that votes in the 2016 election for Hillary Clinton were erased by Russian hackers. This from the same party that mocked Trump's complaints of election fraud. (Tanden is now madly deleting her old tweets.)

The restoration of “truth” was illustrated in the ad by a photograph of the podium in the White House briefing room, which under President Trump has been used to disseminate falsehoods and to undermine the credibility of a news media that his aides have referred to as the “opposition party.”