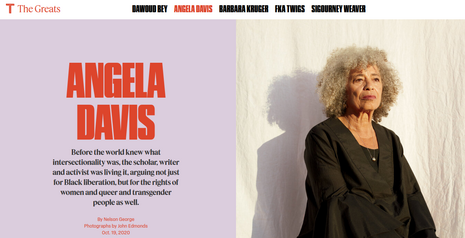 Every year or so the New York Times offers a nauseatingly hagiographic profile of communist Angela Davis. This time it appeared in the paper’s Sunday insert T Magazine, as part of “The Greats” issue, and was blurbed on the front of the paper's website.

Contributor Nelson George opened his long profile with a history of a Brooklyn mural featuring Davis, the Communist Party’s nominee for U.S. vice president in 1980 and 1984, and a polite, blandished history of Davis’s history of violent radicalism and Communist Party activism. The Times went so far as to commission a series of cultish iconic paintings of Davis for the issue.

….She had recently become close to a trio of Black inmates nicknamed the Soledad Brothers (after the California prison in which they were held) who had been charged with the murder of a white prison guard in January 1970. One, George Jackson, was an activist and writer whom Davis befriended upon joining a committee challenging the charges. In August 1970 -- after Jackson’s younger brother, Jonathan, used firearms registered to Davis in a takeover of a Marin County courthouse that left four people dead -- Davis immediately came under suspicion. In the aftermath of that bloody event, she was charged with three capital offenses, including murder.

David made the F.B.I.’s Ten Most Wanted list. She was captured, but eventually acquitted at trial.

But Davis, now 76, is not just an image on a wall or a talking head in a documentary. She remains a vital presence in the world, lecturing at major universities and advising young activists, like the Dream Defenders, a group founded in 2012 after the killing of Trayvon Martin. For most of the last 30 years, she has worked as a public intellectual, teaching at the University of California, Santa Cruz, and other universities, and embodying the kind of left-wing professor who drives conservatives crazy….

Guilty as charged, especially when supposedly objective news sources like the Times worship Davis as a freedom icon, while ignoring her advocacy of jailing anti-Communist dissenters.

Along with coalition building, Davis has long been passionate about radically changing the criminal justice system. While defunding the police has become a philosophical touchstone for Black Lives Matter and other activists, a reimagining of policing and incarceration has been essential to her vision for decades….

Davis received the Lenin "Peace Prize" from East Germany in 1979, when that country was a Communist police state. Davis backed the imprisonment of Soviet political dissidents and defending the Soviet invasion of Czechoslovakia in 1968. A heroine of International Communism. she has no business being portrayed as a critic of a prison system, give her belief of the criminality of Soviet dissidents. The Jewish Journal pointed out: “Harvard law professor Alan Dershowitz wrote in his 1991 book Chutzpah that when he urged Davis to denounce the Soviet Union’s imprisonment of Jews, Davis’ secretary told him that she wouldn’t do so because “they are all Zionist fascists and opponents of socialism.”

This is the closest Nelson comes to that criticism, and he whiffed badly.

After returning to the United States in 1967, Davis affirmed her commitment to Communism, a key reason that she became associated with the Marxist-influenced Black Panthers….Throughout the ’70s and ’80s, as the Communist Party U.S.A.’s presence dwindled, and Communist regimes worldwide became increasingly totalitarian, Davis remained a staunch supporter of the party’s ideas, twice running as its candidate for vice president in the ’80s. In 1991, she stepped away, along with a number of other members, because the party refused to engage in processes of democratization; they formed a new organization, the Committees of Correspondence for Democracy and Socialism….

Nelson thinks Communist regimes only got really nasty in the 1970s? He might want to look up Chairman Mao. Joseph Stalin, and Davis's friend Fidel Castro.

….Racism, she believes, will continue to exist as long as capitalism remains our secular religion….

It will come as no surprise that Davis is a fan of Black Lives Matter and loves "The Squad."