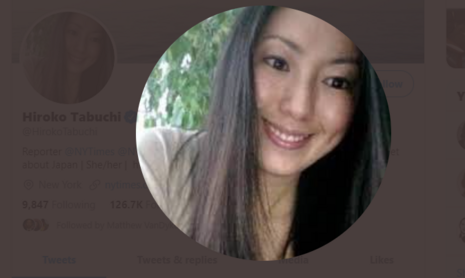 New York Times climate and energy reporter Hiroko Tabuchi linked the oil and gas industry (which she covers) to white supremacy in a since-deleted tweet which read:

I’ve been thinking a lot about fossil fuels and white supremacy recently. Almost every single oil executive, lobbyist, spokesperson I’ve dealt with is white and male. It’s difficult not to see a link.

That slur on an entire industry came on October 1, inspired by Tabuchi’s reading of an article, “Proud Boys and petro-masculinity,” from an activist climate web site. Other potentially offensive tweets have also disappeared from her account, but one, still standing as of now, appears to reference her deleted “white supremacy” comment.

Setting aside the offensive claim, isn’t who she deals with at least partly her fault for lazy reporting? Are there truly no female executives in the industry to speak with?

The unearthed tweet is shocking without being surprising. Tabuchi has long taken an arch angle on her beat. Newsbusters has documented her history of peculiar, biased reporting on environmental issues and her ideological war against conservatives.

In September 2019 she unearthed “secretive...conservative" groups fighting counter-productive regulations, putting herself in the strange position of embracing corporate public-relations-speak from dishwasher manufacturers, in the cause of defending regulations.

In July 2019, she used another leak from liberals to aggressively label industry "deniers" of drastic climate change.

In January 2017, in an echo of the new “white supremacy” smear, she found a left-wing environmentalist to smear as “racist” the effort by libertarian industrialists Charles and David Koch to convert minorities to their viewpoint on energy issues.