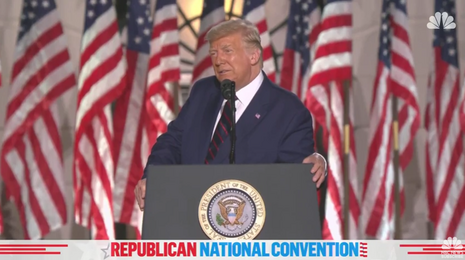 On the fourth and last night of the Republican National Convention, the New York Times strangely issued fact checks not just for facts, but for warnings and predictions from Republican speakers if Democrats won the presidency.

And each night, the paper’s team of live commentators offered gross, personal insults to the speakers.

Some of the most bizarre and biased fact checks from Night 4 included this one, after President Trump claimed in his speech, “Make no mistake, if you give power to Joe Biden, the radical left will defund police departments all across America.”

Reporter Mike Baker declared this warning to be misleading, as if the future can be fact-checked:

Some cities have been moving to cut police department budgets in recent weeks. Mr. Trump implies here that Mr. Biden is a supporter of such cuts, but Mr. Biden has made clear that he opposes defunding and instead has proposed “to get police more money.”…

When Rudy Giuliani said: “So, B.L.M. and antifa sprang into action and in a flash hijacked the protests into vicious, brutal riots,” reporter Katie Benner claimed:

The Justice Department has indicted scores of people for rioting and related crimes, but the department’s latest compilation of criminal charges related to the nation’s ongoing protests does not include members of Black Lives Matter or antifa, the loose coalition of self-described anti-fascist activists….

Nicole Hemmer, author of “Messengers of the Right: Conservative Media and the Transformation of American Politics”:

With more than a thousand maskless people packed tightly on the South Lawn, Trump staged a campaign rally at the White House -- a violation of both norms and possibly law. It’s the perfect encapsulation of his presidency: obscene and corrupt, with little regard for human life.

Héctor Tobar, associate professor at the University of California, Irvine:

Satirists, comedians and surrealist poets all rejoiced at the absurd tableau of Trump’s closing speech: a generalissimo with a comb-over, hovering over an audience of sycophants who were so deeply enthralled by his demagogy, they risked infection by a deadly virus to bask in his presence….

Will Wilkinson, vice president for research at the Niskanen Center, a “moderate think tank,” on Trump:

Anyway, his performance was a masterful, pitch-perfect sendup of what I always imagined fascism would look like when it came to America.”

What does “best” mean in the context of a pageant full of lies meant to entrench fascism?

Kudos to “The Apprentice” production team Trump brought in to frame the convention. Melania’s was the best-produced hostage video I’ve ever seen. ISIS should take notes. I didn’t believe a word she said about her husband. But in fairness to her, I doubt she did either.

Melania Trump’s speech dragged a bit, but it was a nice antidote to the relentless partisanship of the rest of the evening. Also, she claimed to like her husband. Who knew?

My cup runneth over. The terrifying and surreal segment featuring the McCloskey couple from St. Louis was a textbook example of white supremacy.

“The China Virus,” “Beijing Biden” and other China baiting were the lowest moments. They have to know that they are fomenting potentially hostile actions toward Asian-Americans. The fact that they did it is just another example of the belligerent nature of Trump-era intolerance and willingness to run with racist tropes despite the consequences.

Kimberly Guilfoyle’s crazed, screaming rant took the cake. She seemed to take her inspiration from Benito Mussolini, Judge Jeanine Pirro and that Will Ferrell “Saturday Night Live” character who can’t modulate his voice. A G.O.P. star is born.

Peter Wehner, senior fellow at the Ethics and Public Policy Center who served in the previous three Republican administrations:

There are three notable themes that emerged. One is that on the first day of the R.N.C. we witnessed a cult of personality that at times rivaled Jonestown, minus (thankfully) the mass suicide….

At least Wehner stuck that “thankfully” in there, right?