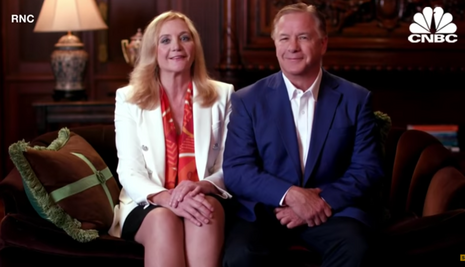 Baker also sidled right past the embarrassing (to the media) case of Nicholas Sandmann, referring him only as “the former Kentucky high school senior whose face-to-face standoff with a Native American protester in 2019 went viral online.” Um, there was a bit more to it then that.

But on Night One of the convention, the paper's reporters trained much of their fire on Mark and Patricia McCloskey, who dared to defend their home by displaying guns when radical marchers broke into their gated community to protest racism with shouts and threats.

The paper’s live briefing thread from Monday night, authored by multiple reporters, made multiple references to the couple, all disparaging, while falsely asserting the marchers were “peaceful protesters.” (Hint: Trespassing and destroying an entrance gate isn’t peaceful. And even "peaceful" protests don't always stay that way, as we've all learned) The smearing comes even after politically motivated felony charges were leveled against them for the incident by a Democratic circuit attorney.

Mark and Patricia McCloskey, the St. Louis couple who threatened peaceful protesters in June, echoed President Trump’s claims that Democratic policies would put Americans’ lives in danger and made several false claims about those policies.

The Times even painted the couple as pests by faulting the lawyer couple for previous lawsuits, which the lawsuit happy left has never previously had a problem with.

The McCloskeys -- who have repeatedly sued people over a wide variety of grievances, including land disputes -- said afterward that they had feared for their lives and their property. In reality, the protesters were unarmed and peaceful. Multiple videos show that they did not threaten or approach the McCloskeys, and some can be heard telling one another to “keep moving.”

Inevitably the race card was played, in a recap story by Jonathan Martin, Alexander Burns, and Annie Karni.

…a St. Louis couple, Mark and Patricia McCloskey, who recently drew wide attention in the news media for brandishing firearms at peaceful Black protesters in their neighborhood, turned to barely veiled racial rhetoric.

“Your family will not be safe in the radical Democrats’ America,” said Ms. McCloskey, sitting with her husband in their home, warning that Mr. Biden, the Democratic nominee, wanted to “abolish the suburbs.”