Cloying NY Times Gets Emotional Over Biden’s Bio: 'A Good Man to Defeat a Bad Man' 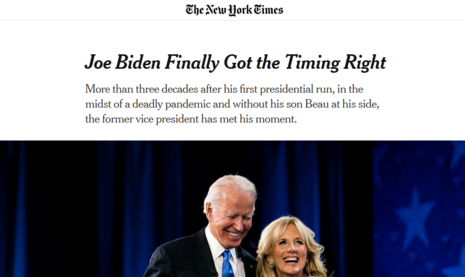 Joe Biden tells funny stories at funerals and sad ones at campaign stops.

He has been running for president long enough to lose the 1988 Democratic primary as a hard-charging 40-something pushing generational change -- and to win the 2020 primary as the white-haired statesman who has steered through sorrow, who can still sniff it out in any room and close in like a pang-seeking missile for the stricken.

….Joseph Robinette Biden Jr.’s experiences have delivered him here. He has at last captured the Democratic presidential nomination, earning the chance to face President Trump because he is, admirers say, all the things that the incumbent is not: empathetic, dependable, decent.

Flegenheimer snuck in some liberal ideological assumptions alongside the biographical bathos:

There is some irony, Democrats concede, in the idea that Mr. Biden prevailed because voters found him comforting and familiar. Through his years in presidential politics, his longevity has generally served to remind his skeptics of all they believe he has gotten wrong: He voted to authorize the use of military force in Iraq and came to regret it. He presided over the committee that subjected Anita Hill to demeaning and invasive questioning in the Supreme Court confirmation hearings for now-Justice Clarence Thomas. He helped craft tough-on-crime legislation that many criminal justice experts now associate with mass incarceration.

….
His underdog Senate victory in 1972, as a relentless 29-year-old who did not know better, came a month before the car crash that killed his wife and daughter and injured his two sons, the trauma that forever enshrined him as an avatar of bereavement in the public consciousness.

His debacle of a first presidential bid, for the 1988 Democratic nomination, collapsed just as he was carrying off one of his signature congressional achievements: helping to engineer the defeat of a deeply conservative Supreme Court nominee, Judge Robert H. Bork.

Then an aneurysm nearly killed him.

The signal promotion of Mr. Biden’s career to date -- his elevation to the vice presidency -- came after another campaign flameout in 2008. And his eight years as President Barack Obama’s chief lieutenant ended with Mr. Biden a tragic figure once more, burying Beau and deciding against another run in 2016.

So it has gone, on some level, in each chapter of Mr. Biden’s biography: the boy with the stutter; the young man in a hurry; the senator with a binder of old eulogies in his office, a brimful accounting of his grief.

The biographical-based hagiography continued, including this dig at President Trump:

Often, his supporters’ argument has seemed this simple: You need a good man to defeat a bad man.

If this sounds vaguely familiar, Flegenheimer wrote a version of this same story two months ago. It also made the front page. )