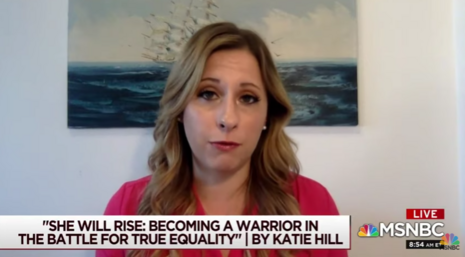 More uncritical sympathy from the New York Times for former California Democratic congresswoman Katie Hill, who resigned from the House of Representatives in late 2019 after revelations involving polyamorous sexual relationships involving a campaign staffer, and possibly her legislative director as well, were revealed. (The former would be unethical, while the latter is prohibited by congressional rules.) Texts and photographs were leaked to the conservative website Red State, spurring liberal outrage and Hill's resignation.

But the Times' “gender editor” Jessica Bennett re-launched Hill into polite society with an embarrassing feature on the front of the Sunday Styles section. The paper posed Hill in flattering fashion, sitting near a chain-link fence under the over-sized, over-sugared headline deck “Don’t Fence Her In – With a book, a podcast and a political action committee, Katie Hill moves beyond a scandal that led her to exit Congress less than a year into her term.”

The nauseating profile included photographs of Hill’s closet, her bookshelf, and “a lamp she splurged on.” Hard-hitting journalism indeed.

If Katie Hill were a different person, she might have gone away and found religion. Perhaps she would have tearfully apologized, a dutiful husband by her side, and vowed to do better. Maybe she would have checked herself into sex rehab, hiked the Appalachian Trail or flat-out denied anything untoward had occurred.

But Ms. Hill, the former Congresswoman from California whose polyamorous affair with a campaign staff member was exposed after nude photos of her (taken without her consent, she said) began circulating online, did none of those things. She resigned, less than two weeks after the photos became public and less than a year into her term.

And so, on a recent afternoon in Washington, D.C., while her former colleague and friend Alexandria Ocasio-Cortez was delivering a rousing speech about sexism on the House floor, Ms. Hill was at home alone, with eggs and Heineken in her fridge, wrestling with an old Samsung laptop.

Bennett quoted Nancy Pelosi’s daughter Christine in her passionate defense Sunday, but didn’t quote Speaker Pelosi herself. The Speaker certainly didn’t sound overly regretful about Hill’s forced departure at the time: "She has acknowledged errors in judgment that made her continued service as a member untenable. We must ensure a climate of integrity and dignity in the Congress, and in all workplaces."

Hill was also the subject of Bennett’s feminist newsletter for the paper after her resignation. Bennett still clearly regards Hill as a martyr to anti-female double standards and right-wing shamelessness.