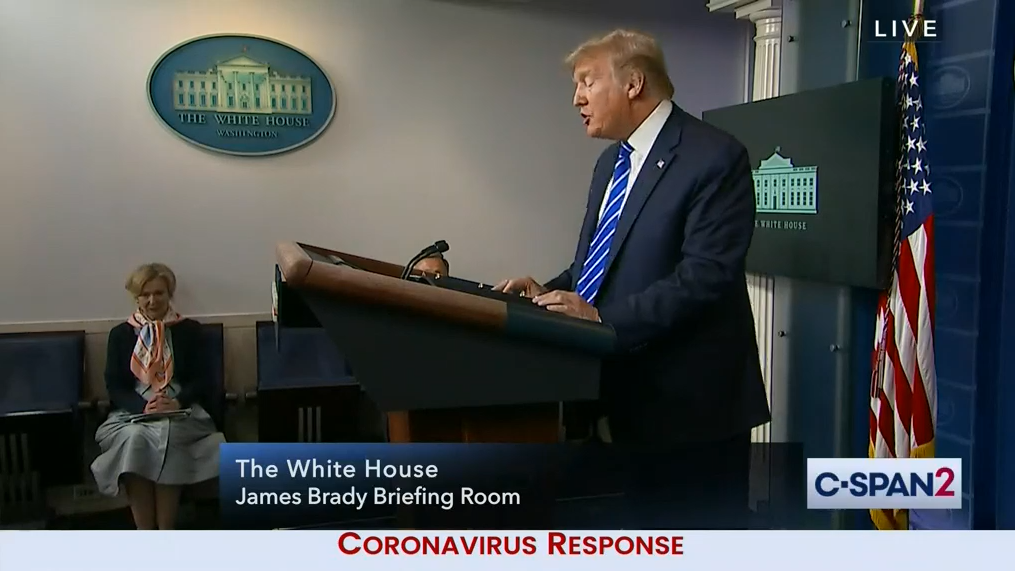 The New York Times thinks it finally has President Trump cornered, after his confusing speculation about disinfectants at a coronavirus briefing last week. The paper used the comments to imply the president is a dim bulb on Monday's front page, with reporter Matt Flegenheimer’s “political memo” carrying the hopeful headline “A Disinfectant That May Mar Trump’s Teflon.”

The online headline deck was blunter: “Trump’s Disinfectant Remark Raises a Question About the ‘Very Stable Genius’ -- The president has often said he is exceptionally smart. His recent suggestion about injecting disinfectants was not.”

President Trump’s self-assessment has been consistent.

“I’m not a doctor,” he allowed on Thursday, pointing to his skull inside the White House briefing room, “but I’m, like, a person that has a good you-know-what.”

Mr. Trump’s performance that evening, when he suggested that injections of disinfectants into the human body could help combat the coronavirus, did not sound like the work of a doctor, a genius, or a person with a good you-know-what.

Mr. Trump’s typical name-calling can be recast to receptive audiences as mere “counterpunching.” His impeachment was explained away as the dastardly opus of overreaching Democrats. It is more difficult to insist that the man floating disinfectant injection knows what he’s doing.

No modern American politician can match Mr. Trump’s record of false or illogical statements, which has invited questions about his intelligence....But Mr. Trump’s stark pronouncement -- on live television, amid a grave public health crisis, and leaving little room for interpretation -- was at once in a class of its own and wholly consistent with a reputation for carelessness in speech.

But while it’s fair game for the supposedly objective Flegenheimer to question Trump’s stability and smarts, it’s just awful when Trump’s political team does the same to Joe Biden.

Still, for weeks, the president’s political team has been strikingly explicit about its intended messaging against Mr. Biden: presenting him as a doddering 77-year-old not up to the rigors of the office -- and setting off on the kind of whisper campaign that does not bother with whispers.

T.J. Ducklo, a Biden spokesman, called this approach “a distraction tactic -- as if anything could erase the memory of the president suggesting people drink disinfectant on national television.”

He ended the story with snark:

....By Saturday, when Mr. Trump tweeted that the events were “not worth the time & effort,” his opponents conceded this much:

The president had probably done something smart.

Bathing your groceries in bleach is not considered best practice.