Wait, What? NY Times on Biden: No Misconduct ‘Beyond Hugs, Kisses and Touching’

The New York Times finally got around to a story (page 20-21) on sexual assault allegations made against Joe Biden by former staffer Tara Reade. The trappings were comprehensive, with many interviews about the alleged incident, but this particular #meToo tale got a cool reception, as reporters Lisa Lerer and Sydney Ember emphasized doubts, scrupulousness the paper manifestly failed to show regarding charges made against now-Supreme Court Justice Brett Kavanaugh.

And there was one paragraph (encapsulated in an already notorious deleted tweet) so jaw-dropping that it was swiftly edited out. But Twitchy caught that gaffe by the Times: 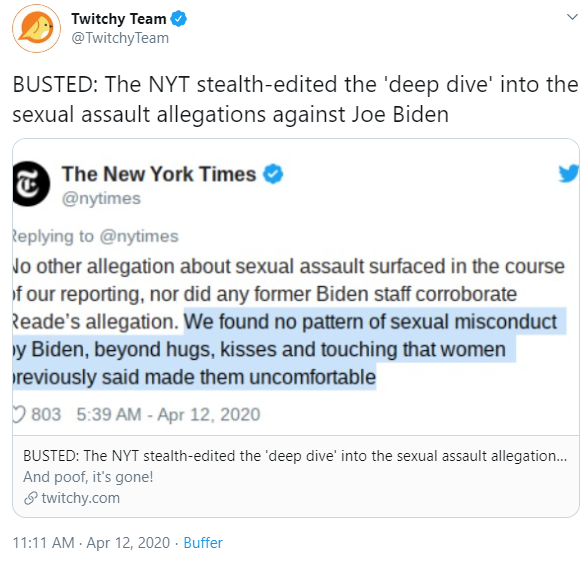 Other than the unwanted "touching," no problems?

The coolly written online headline deck gave the slant away: “Examining Tara Reade’s Sexual Assault Allegation Against Joe Biden -- Ms. Reade, a former Senate aide, has accused Mr. Biden of assaulting her in 1993 and says she told others about it. A Biden spokeswoman said the allegation is false, and former Senate office staff members do not recall such an incident.”

The former aide, Tara Reade, who briefly worked as a staff assistant in Mr. Biden’s Senate office, told The New York Times that in 1993, Mr. Biden pinned her to a wall in a Senate building, reached under her clothing and penetrated her with his fingers. A friend said that Ms. Reade told her the details of the allegation at the time. Another friend and a brother of Ms. Reade’s said she told them over the years about a traumatic sexual incident involving Mr. Biden.

So Reade’s allegations already have far more backup than all the accusations made against Kavanaugh -- without even including the many documented clips and images of Biden inappropriately touching women over the years.

Yet the paper was comfortable stating this:

No other allegation about sexual assault surfaced in the course of reporting, nor did any former Biden staff members corroborate any details of Ms. Reade’s allegation. The Times found no pattern of sexual misconduct by Mr. Biden.

But the original sentence was far more revealing. Originally that line went on like this, as also reflected in a now-deleted tweet:

No other allegation about sexual assault surfaced in the course of our reporting, nor did any former Biden staff corroborate Reade’s allegation. We found no pattern of sexual misconduct by Biden, beyond hugs, kisses and touching that women previously said made them uncomfortable

A Biden campaign manager issued a denial, and then the Times turned the tale back on the true enemy.

President Trump has been accused of sexual assault and misconduct by more than a dozen women, who have described a pattern of behavior that went far beyond the accusations against Mr. Biden....

It did end strongly, quoting Lucy Flores, a former Nevada state assemblywoman who accused Biden of making her uncomfortable by kissing and touching her in 2014.

Yet the paper has previously defended Biden over his inappropriate sexual touching. Ember cowrote an April 2019 story about allegations of inappropriate behavior by Biden that was a ham-handed attempt to neutralize Biden’s behavior.