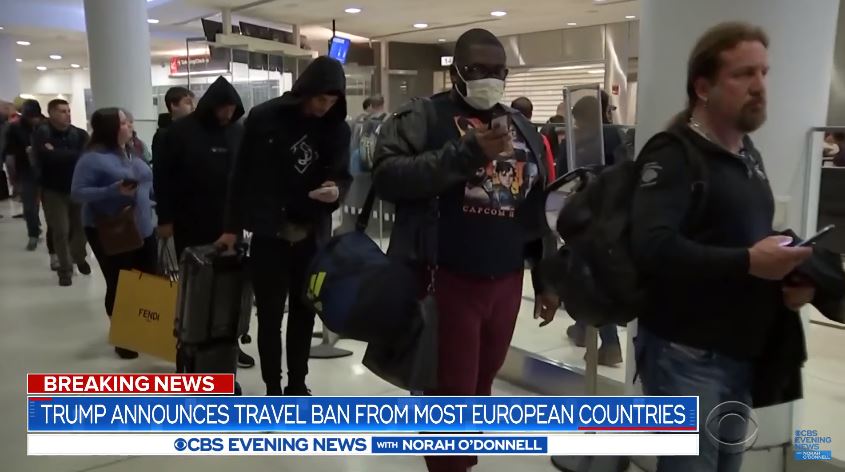 As if it’s a crazy idea that the authoritarian regime of China, which squelched initial news about the virus, could be blamed for its spread.

Again, the paper is using the coronavirus crisis as a political cudgel, portraying the travel ban as an extension of Trump's vile nationalism (although Dr. Anthony Fauci, for one, found the ban sensible).

The online subhead cried: “The president could have used the speech to talk about joining ranks with allies to counter both the virus and the economic impact. He could have talked about sharing public health data and lessons learned from China’s experience. He did not.”

His White House address on Wednesday night was cast in distinctly “America First” terms, seeming to suggest that the United States -- acting alone -- could halt a scourge that started in China, is ravaging Italy and knows no borders. But perhaps most tellingly, it was announced with no consultation with America’s closest allies, following the same pattern of unilateral action he favored when he announced in 2017 that the United States would pull out of the Paris climate accord and then the Iran nuclear deal the following year.

Sanger made dire predictions about impaired cooperation with allies and how Trump's move would be perceived as "punishment."

To Mr. Trump, of course, this was all about containment, a natural follow-on to his early decision to ban flights from China -- a move that many experts agree won the United States crucial time to prepare, even if much of that time was wasted. Back then, the virus was not visibly on American shores.

Now, it is. It is spreading indigenously. And because Mr. Trump’s rule allows entry to Americans, legal residents and their families who have been in Europe, it seems to the Europeans to be less about containment than about punishment.

He could have used the speech on Wednesday night to talk about joining ranks with the country’s closest allies...to counter both the virus and the economic impact....He could have roused the alliance to deal together with a common enemy, even an invisible one that could not be bombed. Instead, his instinct was to follow the course he set when he pulled out of the Paris accord, threatened to leave NATO and renounced the Iran nuclear accord....

And it seemed clear on Wednesday, when Mr. Trump’s national security adviser, Robert C. O’Brien, both defended the administration’s response to the coronavirus and made clear it was China, not the United States, that deserved any blame for a slow international response.

O'Brien's comments were painfully accurate, but Sanger relegated them to the end of the story, portrayed as a lame justification by the Trump administration for its “America First” policy.