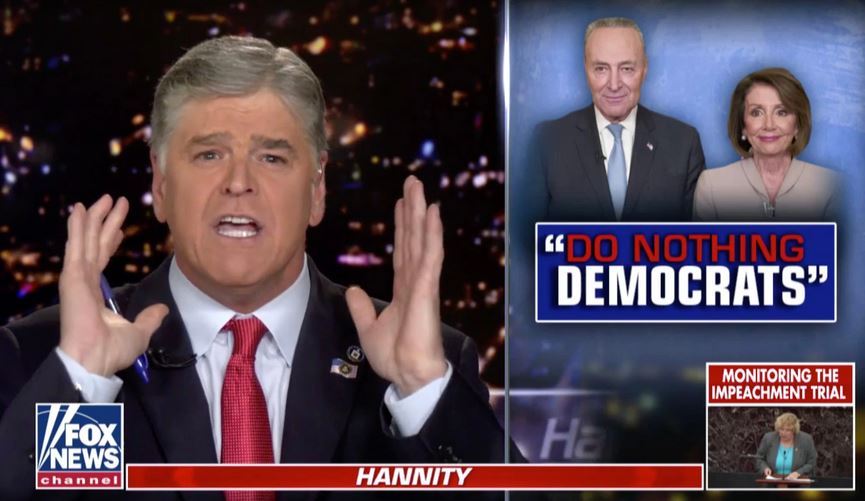 The New York Times is lining up excuses for why the Democrats’ brilliant impeachment case against Trump is not sinking in with Republicans: Conspiracy! That’s the thrust of an op-ed by professor Nicole Hemmer, “Scandalize! Minimize! Repeat as Necessary -- Right-wing media have been laying the groundwork for Trump’s acquittal for half a century.”

Hemmer began by whining Fox News wasn’t giving the live repetitive impeachment proceedings from the Democrats its undivided attention (a clip of which, shown here, accompanied the piece).

This was the purest representation so far of conservative media’s efforts to minimize not just impeachment but the full array of President Trump’s misconduct. But minimization is only half the strategy to protect Republican control of the White House. The other half is scandalization: an effort to create an air of nonstop scandal around previous Democratic presidents and presidential hopefuls....

In Hemmer's estimation, CNN or the Times "creating an air of nonstop scandal" around Trump is "journalism," and reminding people of Democrat scandals is partisan propaganda.

These twin tactics are not inventions of the Trump era. They are part of a decades-long strategy by the right to secure political power -- a strategy originating in conservative media. In that sense, right-wing media have been laying the groundwork for Trump’s acquittal for half a century.

Hemmer made dubious use of space by defending President Lyndon Baines Johnson, described even in left-wing papers as an awful man with credible allegations of election-stealing and sexual misconduct laid against him.

But it was President Lyndon Johnson who came in for the most brutal attacks, primarily for the sin of running against the conservative darling Senator Barry Goldwater....One book, though, found an avid conservative audience: “A Texan Looks at Lyndon.”

J. Evetts Haley, a Texas rancher, self-published the book in 1964. In it, he offered unsubstantiated accounts of bribery, stolen elections and even convenient deaths that helped pave Johnson’s road to the White House....

The rapid expansion of conservative media in the 1990s and 2000s, and the conservative scandal machine that powered it, transformed American politics. During the Bill Clinton era, new scandal-mongering magazines and websites made up what Hillary Clinton accurately called a “vast right-wing conspiracy.”....Republicans diminished the significance of impeachment, making it less likely the public would take the current impeachment crisis seriously.

That’s amazing political clairvoyance on the part of conservative media. Or perhaps the Clinton impeachment was just politics as usual?

She even attacked a fellow Times contributor:

Conservatives focusing on scandal were "deeply nihilistic," not idealistic. She made no mention of the myriad anti-Bush books written by such liberal dignitaries as the paper’s own Paul Krugman.