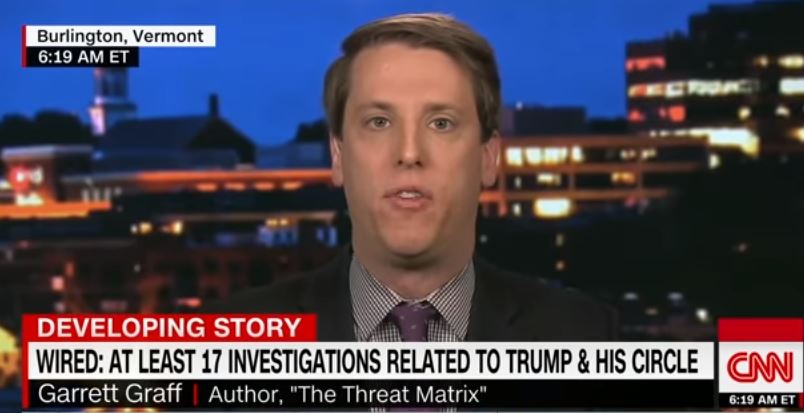 Wired magazine contributing editor Garrett Graff, who is also a CNN contributor, indulged in paranoia this week in “Fox News Is Now a Threat to National Security -- The network’s furthering of lies from foreign adversaries and flagrant disregard for the truth have gotten downright dangerous.”

Monday’s split-screen drama, as the House Judiciary Committee weighed impeachment charges against President Trump and as the Justice Department’s inspector general released a 476-page report on the FBI’s handling of its 2016 investigation into Trump’s campaign, made one truth of the modern world inescapable: The lies and obfuscations forwarded ad infinitum on Fox News pose a dangerous threat to the national security of the United States.

Graff cherry-picked the Inspector General report, ignoring the FBi lies used to authorize surveillance, and failed to mention the “dossier,” the now-discredited font of anti-Trump rumor. This line cast suspicion on the rest of Graff’s rant:

Conservative journalist John Harwood? Since when?

Graff claimed “Fox’s bubble reality creates a situation where it’s impossible to have the conversations and debate necessary to function as a democracy.” George Orwell’s 1984 came up, naturally.

The idea that Fox News represents a literal threat to our national security, on par with Russia’s Internet Research Agency or China’s Ministry of State Security, may seem like a dramatic overstatement of its own -- and I, a paid contributor to its competitor CNN, may appear a biased voice anyway -- but this week has made clear that, as we get deeper into the impeachment process and as the 2020 election approaches, Fox News is prepared to destroy America’s democratic traditions if it will help its most important and most dedicated daily viewer.

If Graff wanted to talk bias and fake news, his employer CNN would have been a great subject.

The threat posed to our democracy by Fox News is multifaceted: First and most simply, it’s clearly advancing and giving voice to narratives and smears backed and imagined by our foreign adversaries. Second, its overheated and bombastic rhetoric is undermining America’s foundational ideals and the sense of fair play in politics. Third, its unique combination of lies and half-truths has built a virtual reality so complete that it leaves its viewers too misinformed to fulfill their most basic responsibilities as citizens to make informed choices about the direction of the country.

Another condescending reference to 1984 led to this conclusion:

Let’s hope that Fox News today, unlike in Orwell’s world, doesn’t manage to succeed in transforming our country from a functional democracy into an authoritarian cult.