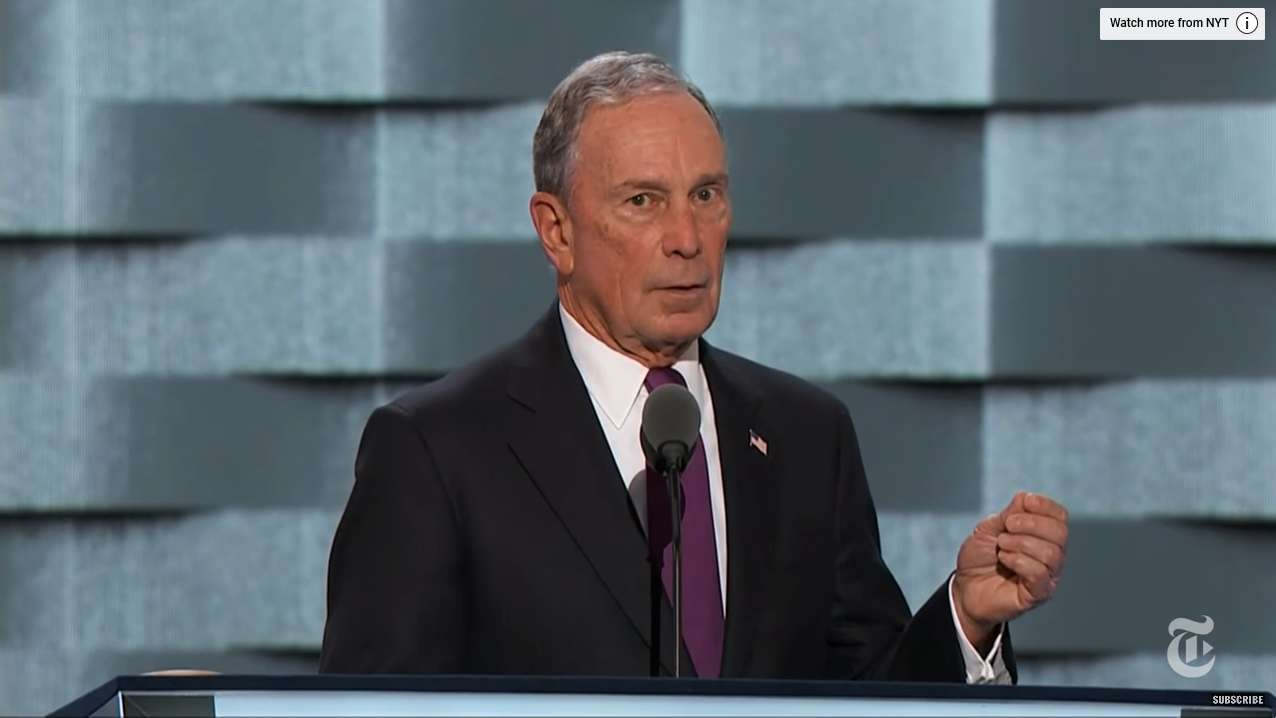 But just how “centered” and “moderate” is Michael Bloomberg?

Michael R. Bloomberg announced on Sunday that he would run for president in 2020, bringing his enormous wealth and eclectic political biography into the tumultuous Democratic primary and seeking to win over skeptical liberal voters by presenting himself as a multibillion-dollar threat to President Trump.

Mr. Bloomberg, a former Republican who has expressed reservations about his adopted party’s leftward drift, said in a statement that he would offer a pragmatic option to voters in a campaign to unseat a president who “represents an existential threat to our country and our values.”

Mr. Bloomberg, 77, faces immense obstacles to winning the Democratic nomination, starting with his own political baggage that includes a complex array of business entanglements, a history of making demeaning comments about women and a record of championing law enforcement policies that disproportionately targeted black and Latino men with invasive searches.

Bloomberg even reached out to “civil rights leader” charlatan Al Sharpton after apologizing for the stop-and-frisk police tactics he pushed as mayor, not exactly a move to the center.

Perhaps to blunt that criticism, Mr. Bloomberg’s announcement video and opening advertisement included a call for the wealthy to pay more in taxes.

The reporters placed both Joe Biden (debatably) and Pete Buttigieg (ludicrously) on the Democrat’s “moderate” wing.

Mr. Bloomberg’s candidacy has the potential to reshape the primary in a number of ways, perhaps most immediately by shaking up the contest to lead the Democratic Party’s moderate wing. Former Vice President Joseph R. Biden Jr. and Mayor Pete Buttigieg of South Bend, Ind., have emerged as the leading primary candidates closer to the political center, and Mr. Biden remains the overall front-runner for the nomination....

After mentioning liberals in the first paragraph, the story acquired an allergy to using the dread word to describe left-wing Democrats.

While Mr. Bloomberg is a political moderate, his opening message also borrowed in some respects from the anti-Washington rhetoric of the Democratic Party’s populist wing, led by progressives like Mr. Sanders and Senator Elizabeth Warren of Massachusetts. “I know how to take on the powerful special interests that corrupt Washington,” Mr. Bloomberg said in his statement on Sunday. “And I know how to win.”

Also in Monday’s edition, reporters Katie Glueck and Sydney Ember called the liberal Indiana mayor Pete Buttigieg a moderate, and made an even more bizarre claim about a previous presidential candidate in “Biden Is Lagging in Iowa, and for Some Supporters, the Thrill Is Gone.”

The former vice president’s backers have noted a lack of enthusiasm and a spotty campaign operation as reasons Joe Biden is lagging in Iowa, not to mention a formidable moderate competitor in Pete Buttigieg....And party officials often hark back to 2004 -- a year in which there was also a Republican incumbent -- when Senator John Kerry of Massachusetts, a staid moderate, prevailed in the caucuses despite signs in the months before that Howard Dean, the feisty former governor of Vermont, was surging.

It’s bad enough that the Times is labeling Buttigieg and Bloomberg moderates, although there is at least the thin excuse that there are no hard-and fast metrics for measuring just how liberal those two former mayors are. But the American Conservative Union has long kept up with the ideological voting records of congressmen, and former Sen. Kerry as of 2004 had earned a lifetime rating of 5.18 out of a possible 100. No “staid moderate,” just a true-blue Massachusetts liberal.