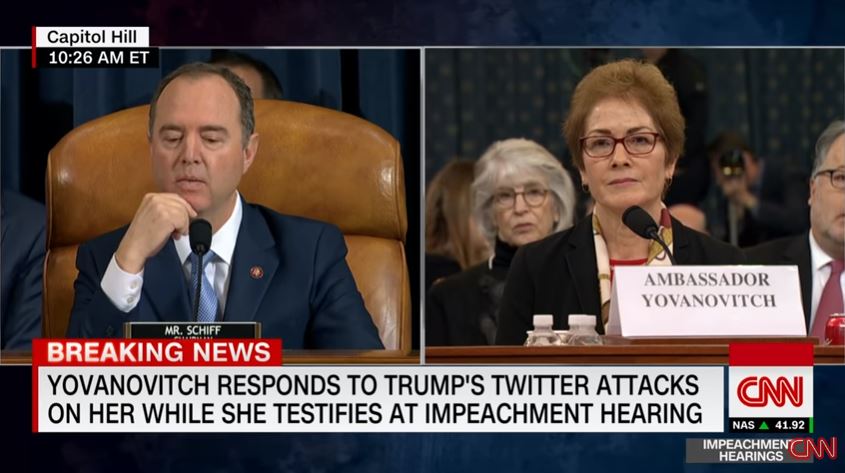 President Trump on Friday attacked Marie L. Yovanovitch, the former United States ambassador to Ukraine he summarily removed this year, even as she testified in the impeachment inquiry about how she felt threatened by Mr. Trump.

Did his behavior amount to witness tampering?

If the question is what could be charged in court, the answer is probably not. But impeachment is not limited to ordinary crimes. As House Democrats weigh bringing articles of impeachment against Mr. Trump -- including one potentially based on his obstruction of congressional investigations -- the president’s Twitter onslaught may well have handed them more fodder.

As Ms. Yovanovitch was telling the House Intelligence Committee about the devastation and fear she felt this year when she was targeted first by Mr. Trump’s allies and later by the president himself during a phone call with President Volodymyr Zelensky of Ukraine, Mr. Trump fired off a tweet denigrating her anew.

“Everywhere Marie Yovanovitch went turned bad. She started off in Somalia, how did that go?” Mr. Trump wrote, assailing her on Twitter to his 66 million followers.

Then Democratic Rep. Adam Schiff performed some grandstanding posing as solemnity, perhaps to coax some emotion out of Yovanovitch.

A few minutes after the president’s tweet, Representative Adam B. Schiff, Democrat of California and the chairman of the Intelligence Committee, interrupted Ms. Yovanovitch’s testimony to read it and ask her what the effect the president’s attack on her would have “on other witnesses’ willingness to come forward and expose wrongdoing.”

She appeared momentarily uncertain how to respond.

“It’s very intimidating,” she said. She then paused, searching for words. “I can’t speak to what the president is trying to do, but the effect is to be intimidating.”

Mr. Trump has a history of using his platform to excoriate people who are in a position to serve as witnesses to his own potential wrongdoing, using Twitter and statements at his political rallies to criticize less well-known people by name, in humiliating and sometimes threatening ways.

At a minimum, it can unleash a cascade of abuse online and harassing messages from Mr. Trump’s supporters, which can be especially unsettling for people who are not accustomed to being in the public eye.

Just like their Times colleague Sheera Frenkel on Friday, Savage and Shear went for a tasteless piece of guilt by association, lumping in the latest in a long line of provocative Trump tweets with a recent domestic terror plot.

But it can also raise fears that some unhinged person may go further: This year, a fervent Trump supporter, Cesar A. Sayoc Jr., was sentenced to 20 years in prison for mailing bombs to people and organizations that Mr. Trump had criticized, including prominent Democrats and journalists.

Savage and Shear, working with thin evidence, nevertheless tried to conjure up another crime out of Trump’s tweet, which clearly wasn’t sent to dissuade Yovanovitch from testifying, given she was already doing so at the time.

But when deciding what amounts to an impeachable offense, Congress is not limited to violations of ordinary criminal statutes. Lawmakers may also impeach a president for actions that are lawful, yet still constitute abuses of power.