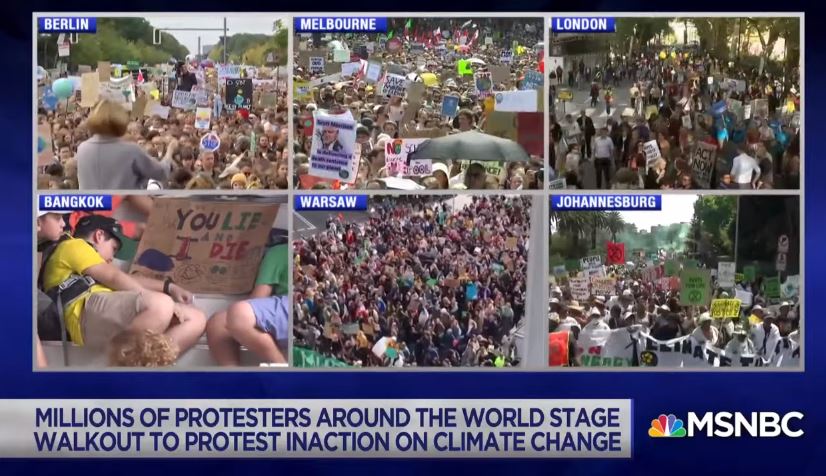 The New York Times’ Saturday edition brought an update to the world-wide “climate strike” by schoolchildren from the paper’s apocalyptic-sounding international climate reporter Somini Sengupta. It's a huge two-page story with photos from around the world: “Young People Around the World Take It to the Streets.” The text box: “Anxious about the future and doing something about it.” Doing something about it, apparently translates to "skipping class."

Anxious about their future on a hotter planet and angry at world leaders for failing to arrest the crisis, masses of young people poured into the streets on every continent on Friday for a day of global climate protests. Organizers estimated the turnout to be around four million in thousands of cities and towns worldwide.

Sengupta wrote the introductory text for an even more panicky story in Saturday’s edition, “‘This Is Our Terrifying World,” featuring photographic profiles of six young climate activists worldwide.

Their cities are running out of water. Droughts are driving their friends off their farms. Mosquitoes are showing up in places where they had never seen them. The future of the planet seems so uncertain that they confess to being afraid and anxious.

From Melbourne to La Paz, London to Cape Town, young people took part in an historic day of protests on Friday to goad world leaders into addressing what they call the climate crisis. Rallies were held in an estimated 150 countries and across the United States.

Who are these young protest organizers? What is driving them? What do they want?

The profiles included frenetic jumping to dire conclusions, with the paper of record accepting the judgement of the children that, for instance, the long-running water crisis in South Africa could be blamed on climate change, though there’s no evidence of such a direct link.

There was also an unjournalistic, hippie-style description of the Amazon rain forests as the “lungs of the planet,” a pretty metaphor without a real-world basis.

To calm the neurotic fears of the kids (and Times reporters) perhaps a reality check is in order, like this history from the Competitive Enterprise Institute of the media’s embarrassing history of headlining dire environmental predictions that failed to pan out.