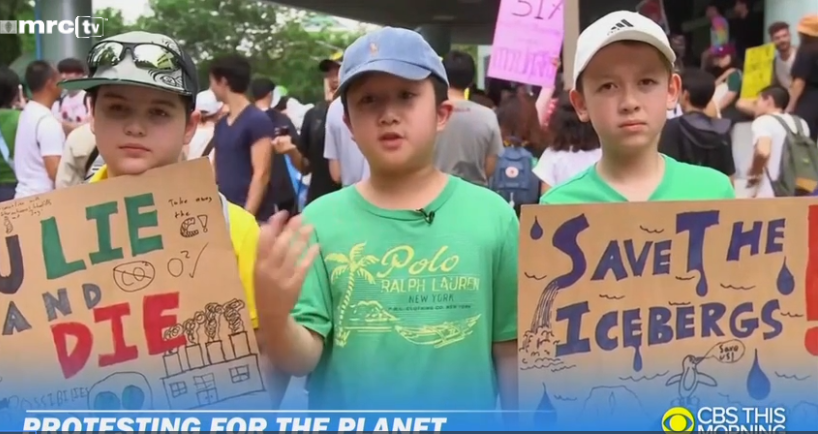 Schoolkids around the world are cutting class Friday for the “climate,” and the New York Times is very excited (so much for the value of education). The editorial page was especially hyped up, issuing a call online for protest sign pictures: “Are You Going to the Climate Protest? We Want to See Your Sign! -- We want to share young people’s illustrations and videos with the world.”

Tens of thousands of young people around the globe are expected to go on strike on Friday to demand action on the climate crisis. They know that if we don’t solve this crisis now, we may soon have an unlivable climate. And they refuse to accept the idea that our politicians won’t do anything about it.

Now the Opinion section wants to hear from young people around the world.

Maybe you’re getting ready to go to one of the protests and you’re making a sign to take with you. Or maybe you just want to show your solidarity from afar. What would your sign say? What images would you draw or paint on it?

We’d love to see your ideas. Send us a photo of your sign, a video of you making it or even a selfie of you at the march holding your sign up. Tell us what the design means to you and why you’re protesting. Give us your ideas for fixing this crisis.

Reporter Somini Sengupta was just as promotional in her Friday morning “news” coverage of the mass class-cutting, er, climate strike, constantly updating with breathless reports of protests around the world (save China, the world’s largest source of greenhouse gas emissions)

They are in open revolt.

Anxious about their future on a hotter planet, angry at world leaders for failing to arrest the crisis, thousands of young people began pouring into the streets on Friday for a day of global climate protest.

“I fight for climate justice action because everyone deserves a safe future, which is something our government is not supporting yet,” said Niamh O’Connor Smith, 17, who addressed the crowd in Melbourne, Australia, at one of the first global rallies. “Together, we will change that.”

At a time of fraying trust in authority figures, children -- who by definition have no authority over anything -- are increasingly driving the debate over how to avert the most catastrophic effects of climate change. Using the internet, they are organizing across continents like no generation before them. And though their vague, outsize demands for an end to fossil fuels mirror those of older environmentalists, their movement has captured the public imagination far more effectively.

Or at least the imaginations of liberal journalists.

The generational outcry comes as planet-warming greenhouse gas emissions continue to soar, even as their effects -- including rising seas, intensifying storms, debilitating heat waves and droughts -- can be felt more and more.

This is a new generational revolt, though. It’s not against injustice in a particular country, nor against a war. This is about the future on a hotter planet. Young people worry about the cataclysmic impact of climate change on their future, coloring where they will live, how they will grow their food, and how they will cope with recurrent droughts and floods. The internet allows them to mobilize. They often know more about the issue than their parents do.

Anne Barnard had the local angle on Friday, providing a booster signal for the disappointment of liberal Brooklyn children and parents upon laerning that teachers couldn’t chaperon their kids to climate rallies in the name of political neutrality.

Hanna and Kian Joulaee, twins and fifth graders at Public School 10 in Brooklyn, spent Wednesday night decorating signs and T-shirts for a rally in Red Hook set for Friday, a day of global youth protests for urgent action on climate change.

But on Thursday morning, their mother, Tannaz Fassihi, received an email from school administrators, explaining, “with a sense of disappointment,” that the optional field trip to the rally was canceled. The city’s Education Department ruled that employee participation would violate rules ensuring a “politically neutral learning environment,” as would schools that stage their own climate-action walkouts on school property.

Ms. Fassihi was crestfallen. As an Iranian-American who grew up in Tehran unable to freely express opinions, she said she had been excited to see her children’s school teaching civic engagement by example, along with teaching about climate science.

“It’s so upsetting -- I’d been so proud and happy, we were talking about how every voice counts, about freedom of speech,” she said. “Besides, we’ve been talking about climate change not as a political issue, but as a scientific fact.”