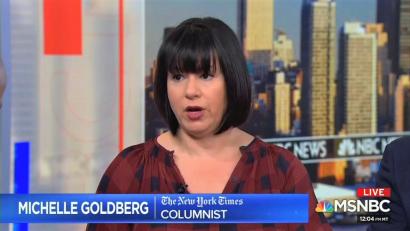 New York Times columnist Michelle Goldberg danced a jig on the grave of the Grand Old Party and admitted that the presence of Trump in the White House literally keeps her up at night in “Dare We Dream of the End of the G.O.P.? -- In a new book, the pollster Stanley Greenberg predicts a blue tidal wave in 2020.” The Times liked it so much it put the piece on the front of nytimes.com Friday morning.

Toward the end of his new book, “R.I.P. G.O.P.,” the renowned Democratic pollster Stanley Greenberg makes a thrilling prediction, delivered with the certainty of prophecy. “The year 2020 will produce a second blue wave on at least the scale of the first in 2018 and finally will crash and shatter the Republican Party that was consumed by the ill-begotten battle to stop the New America from governing,” he writes.

It sounds almost messianic: the Republican Party, that foul agglomeration of bigotry and avarice that has turned American politics into a dystopian farce, not just defeated but destroyed.

Goldberg confessed the party has been prematurely buried before:

This is not the first time that experts have predicted the inevitable triumph of progressive politics. Seventeen years ago, John Judis and Ruy Teixeira published “The Emerging Democratic Majority,” which argued that the country was on the cusp of a liberal political realignment driven by growing diversity, urbanization and gender equality....

It didn’t happen. But it just might this time, so she hopes, because of Republican nativism and hostility to immigrants.

.... according to recent Pew data, 62 percent of Americans say that immigrants strengthen the country, while 28 percent, a near record low, see them as a burden.

Yet rather than modulating their anti-immigrant politics in response, Republicans have little choice but to double down, because so many of their voters are driven by nativism....

This was a mortifying admission:

His confidence will not be enough to lessen the insomnia that has plagued me since the cursed night when Trump was elected. But his book should be a corrective to the media’s overweening focus on the mulish devotion of Trump voters. Trump hatred is a much more potent force in this country than Trump love....

Goldberg has also embraced the public harassment of Trump administration officials in June 2018, and was disappointed in April that Trump wasn’t in prison already -- another column where she made an embarrassing admission: That she watched an amateurish YouTube clip over and over, leering over the fake, photo-shopped arrests of her political opponents in the Trump White House.