How Do You Spell ‘Hysteria’? NY Times Frets of ‘Permanent Effect’ of Trump Typos

New York Times reporter Sarah Lyall made the front page on Sunday with the earthshaking revelation that Trump’s tweets contain misspellings: “Their or There? Sticklers Twitch At Trump Posts.”

It was late May, and the president of the United States could not seem to get off Twitter. The low IQ-ness of Joe Biden. The idiocy of the Democrats. The Wall! The opinions spewed forth like unguided missiles, delighting those who support Donald Trump and dismaying those who do not.

Lyall launched with the anger of an author angry at Trump confusing “their” and “there” in a tweet. 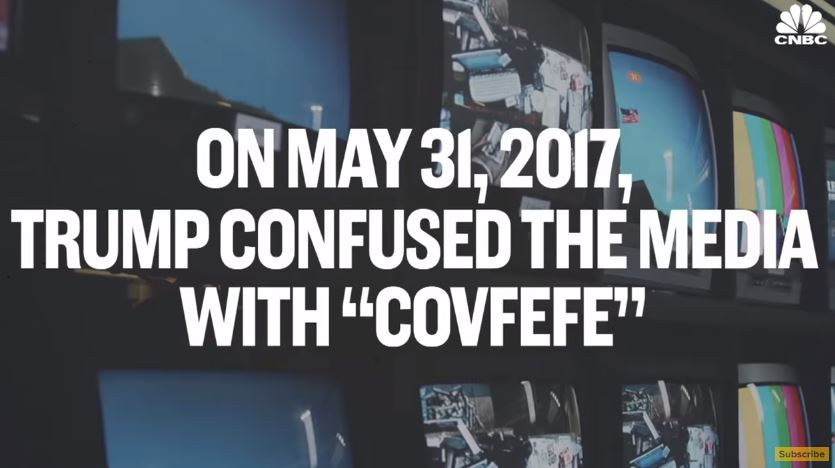 But for people who care about the English language and how best to use it, President Trump’s continual flouting of even basic writing conventions is a serious matter indeed. Mr. Trump’s impulsive tweeting and concomitant error rate seem to have grown this year as his frustrations with topics that upset him, from the Mueller report and the House speaker Nancy Pelosi to immigration and 2020, have intensified....

After he has spent nearly three years in office, Mr. Trump’s critics ask, why does he remain intent not only on making egregious errors, but also on deliberately failing to correct them? Leaving aside its splenetic tone and in-your-face ad hominem attacks, knee-jerk defensiveness and ugly, dog-whistle language, why is so much of the direct communication from the president to the world heaving with bad grammar, bad spelling, bizarre punctuation, muddy diction and inexplicable random capitalization?

Her look back at previous language-challenged presidential statements tilted left:

Mr. Trump is not the first president whose use of language has provoked ridicule and dismay. Former President Bill Clinton claimed there were different ways to define the word “is.”

Former Vice President Dan Quayle believed the word “potato” had an “e” at the end and did not seem to care that his home mailbox identified his family as “The Quayle’s.” And former President George W. Bush once declared, with inadvertent accuracy: “Rarely is the question asked: Is our children learning?”

Some context for the Quayle gaffe: While visiting a classroom and conducting a spelling lesson, then-Vice-President Quayle did tell a boy that the word "potato" should have an "e" added to the end, but the teacher herself had misspelled the word on the word list she had given to Quayle to check the children's spelling.

Obama made plenty of factual gaffes and also some verbal ones, like “The reforms we seek would bring greater competition, choice, savings and inefficiencies to our health care system.” And of course “I’ve now been in 57 states -- I think one left to go,” during the 2008 campaign. He pronounced "corpsman" as "corpse-man."

Lyall piled up insults from all corners, real and fictional, including Humpty Dumpty.

“Trump thinks he can get away with stuff simply because he does it,” she said. “But he’s not king of the language. He’s not king of anything. And who took Humpty Dumpty seriously in the long run? He’s famous, of course, but only for being all cracked.”

[Random House copy chief Benjamin] Dreyer said that correcting the president’s errors in real time helped him channel some of the anger he feels when he thinks about Mr. Trump’s policies.

“It gives me the chance to make fun of something that I find truly horrifying,” he said. “It’s like releasing a valve on the pressure cooker.”

And it probably performs the same function for journalists at the New York Times. But don’t think this is just meaningless Twitter mockery.

Beyond the questions that Mr. Trump’s Twitter feed raises about his relationship to matters of writing style, Mr. Sokolowski, the lexicographer at Merriam-Webster, said that there is a larger issue here.

Of course there is.

At a time of “self-evident transgressions against truth,” when even facts are up in the air, he said, the president’s approach also draws attention to the importance of individual words and their meanings. George Orwell touched on the point in “Politics and the English Language,” about the relationship between the way people think and the way they speak and write. “If thought corrupts language,” he wrote, “language can also corrupt thought.”

The Times has previously tried to drag in George Orwell to cast Trump as a danger to reality, based on another silly language controversy -- whether or not he called Duchess Meghan Markle “nasty.”

The online subhead elevated the Trump typo issue into a crisis in the way humans communicate: “The president’s supporters don’t mind his linguistic slips, but lexicographers and grammarians worry about the permanent effect on language.”