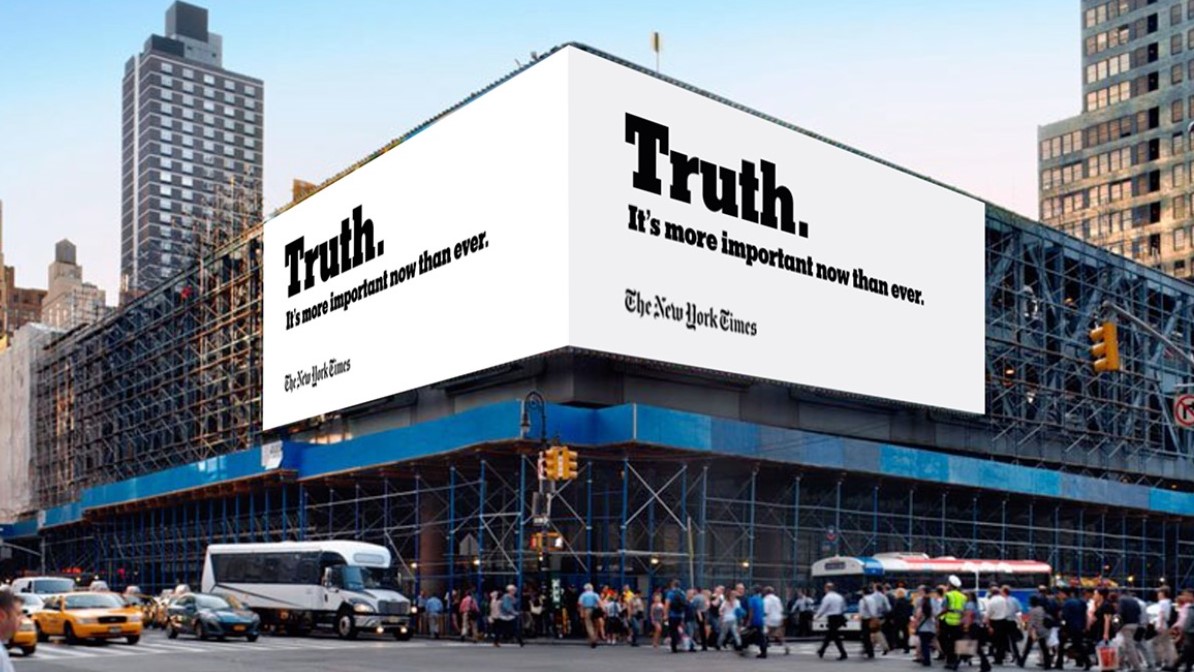 So much for those New York Times slogan "Truth. It's more important now than ever.” Digging up old social media postings to use against public figures (usually conservatives) is the kind of “investigation” the Times and the rest of the press have being doing for years. But now, as a recently uncovered pro-Trump project is revealed to be targeting journalists in similar fashion, the tactic is suddenly disreputable, even dangerous.

Holding journalists accountable for their own offensive statements and behavior is somehow dangerous, as if they’re a protected class with a special dispensation to research publicly available social media posts. The Times is putting itself in the awkward and hypocritical position of opposing the reporting of publicly available statements and facts when done by conservatives.

The tactic can damage careers, but the newspaper's outrage comes off hollow, given the press’s history of doxxing Trump supporters for making pro-Trump or anti-Democratic “memes” they didn’t like, and the Times itself, for publishing an op-ed advocating the “doxxing” -- revealing personal information on private citizens for the purpose of targeted harassment -- of U.S. Customs and Border Protection agents.

Not to mention the fact that Times journalists like Sarah Jeong and Tom Wright-Piersanti, both guilty of hateful and racist comments on Twitter, retain their positions. 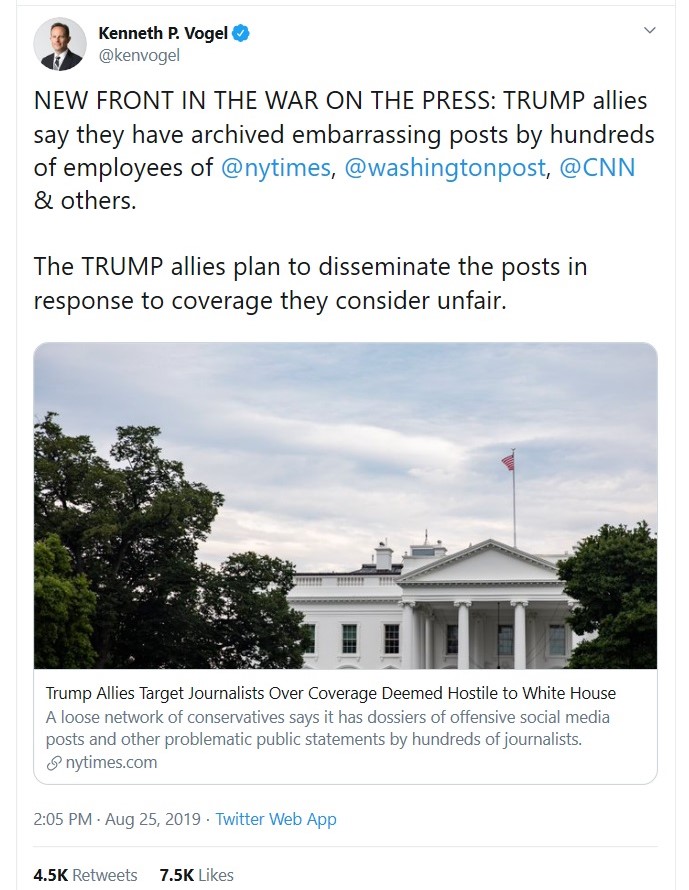 As if the Times itself hasn’t declared itself at war with Donald Trump on its front page.

A loose network of conservative operatives allied with the White House is pursuing what they say will be an aggressive operation to discredit news organizations deemed hostile to President Trump by publicizing damaging information about journalists.

It is the latest step in a long-running effort by Mr. Trump and his allies to undercut the influence of legitimate news reporting. Four people familiar with the operation described how it works, asserting that it has compiled dossiers of potentially embarrassing social media posts and other public statements by hundreds of people who work at some of the country’s most prominent news organizations.

The group has already released information about journalists at CNN, The Washington Post and The New York Times -- three outlets that have aggressively investigated Mr. Trump -- in response to reporting or commentary that the White House’s allies consider unfair to Mr. Trump and his team or harmful to his re-election prospects.

The reporters fingered as a central player one “Arthur Schwartz, a combative 47-year-old conservative consultant who is a friend and informal adviser to Donald Trump Jr., the president’s eldest son."

A petulant photo caption read: “The operation is the latest step in a long-running effort by President Trump and his allies to undercut the influence of legitimate news reporting.” But are they really targeting “legitimate news reporting”...or fighting back against the actual reporting being done by the “mainstream” press these days? There’s a huge difference.

The campaign is consistent with Mr. Trump’s long-running effort to delegitimize critical reporting and brand the news media as an “enemy of the people.” The president has relentlessly sought to diminish the credibility of news organizations and cast them as politically motivated opponents.

Mr. Nunberg and others who are familiar with the campaign described it as meant to expose what they see as the hypocrisy of mainstream news outlets that have reported on the president’s inflammatory language regarding race.

“Two can play at this game,” he said. “The media has long targeted Republicans with deep dives into their social media, looking to caricature all conservatives and Trump voters as racists.”

But using journalistic techniques to target journalists and news organizations as retribution for -- or as a warning not to pursue -- coverage critical of the president is fundamentally different from the well-established role of the news media in scrutinizing people in positions of power.

That is an amazing passage. Translation: Only we get to dredge up the social media posts of our political enemies to damage reputations!

A. G. Sulzberger, the publisher of The Times, said in a statement that such tactics were taking the president’s campaign against a free press to a new level.

Speaking of retribution...CNN and The Daily Beast performed doxxing threats and actual doxxing on ordinary American meme-makers who had committed the deadly sin of supporting Trump.

The operation is targeting the news media by using one of the most effective weapons of political combat -- deep and laborious research into the public records of opponents to find contradictions, controversial opinions or toxic affiliations....

Vogel and Peters referenced a recent Times social media controversy regarding what they themselves admitted were “anti-Semitic and racist tweets” from editor Tom Wright-Piersanti, posted before he joined the paper’s political desk. Wright-Piersanti was quoting as feeling “deep shame” about tweets, then offered this excuse to his colleagues:

For my generation, the generation that came of age in the internet, all the youthful mistakes that you made get preserved in digital amber, and no matter how much you change and mature and grow up, it’s always out there, waiting to be discovered.

The paper failed to extend the excuse of “youthful mistakes” to Covington Catholic student Nicholas Sandman (who didn’t actually make one) or to Parkland teen and Second Amendment activist Kyle Kashuv, instead covering his past offensive comments on the front page.

Like Mr. Wright-Piersanti, other targets of the pro-Trump network have been young people who grew up with social media and wrote the posts in question when they were in their teens or early 20s, in most cases before they became professional journalists.