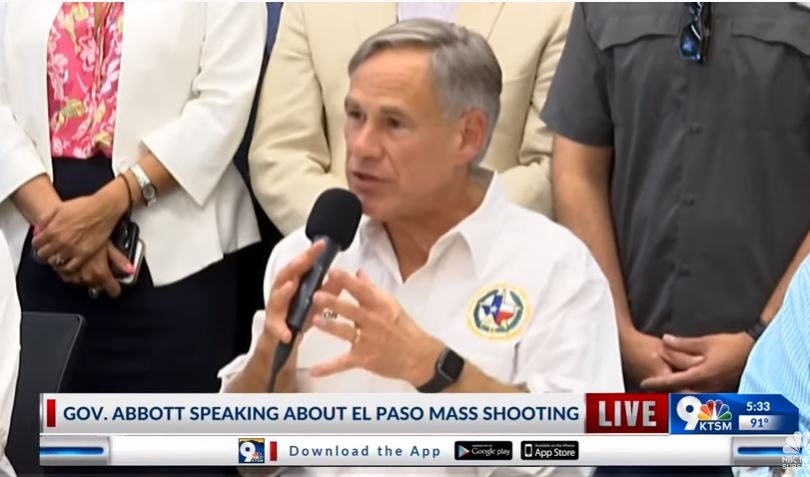 The New York Times was in a panic in Saturday’s edition, with reporters Manny Fernandez and David Montgomery relaying Democratic whining about a GOP fundraising letter in “Texas Democrats Urge G.O.P. to ‘Eradicate’ Incendiary Rhetoric.” The online headline: “In Aftermath of El Paso Attack, a Reckoning on Texas’s Divisive Political Rhetoric.”

The Texas-based team of Fernandez and Montgomery have previously teamed up for freak-outs over the “far right,” “ultraconservative” Texas GOP, and they are still skittish about their fellow Texans.

Typically, a campaign plea from a Texas governor calling for fellow Republicans to “defend Texas” from illegal immigration and “take matters into our own hands” would be met with a collective yawn. Such appeals have been commonplace in Republican-controlled Texas, where taking a hard line on immigration is a given.

But after a mass shooting in El Paso earlier this month, these are anything but typical times in Texas politics.

They suggested a fundraising letter was the equivalent of violent rhetoric that risked encouraging more racist El Paso shooters. The reporters even put the gunman and the letter in the same paragraph, all the better to conflate the two in readers’ minds.

A fund-raising letter sent out by Gov. Greg Abbott’s campaign the day before the shooting at an El Paso Walmart has angered Democrats and illustrated the lingering political fallout from the deadliest anti-Latino attack in modern American history.

On Aug. 3, a white, 21-year-old gunman opened fire at the Walmart in the border city of El Paso, killing 22 people in a hate-filled attack targeting what he called “the Hispanic community.” In the campaign letter dated Aug. 2, Mr. Abbott sought to rally potential donors by writing, “If we’re going to defend Texas, we’ll need to take matters into our own hands.” The word “defend” was written in bold, underlined and in all caps.

The letter described the large number of undocumented immigrants crossing the border into Texas, called out both parties for refusing to work with President Trump to secure the border and warned that liberals were trying to transform Texas through illegal immigration and “turn Texas blue.”

“Doing nothing will only lead to disaster for Texas, both economically and politically,” the letter read.

Leaders of the Texas Democratic Party called the letter racist, anti-Latino and anti-immigrant and said it was filled with the kind of rhetoric that fueled the hatred of the El Paso gunman. The Dallas-area man charged in the attack, Patrick Crusius, had posted an online anti-Latino manifesto minutes before the shooting, declaring that he was acting in response to “the Hispanic invasion of Texas” and fears that the Hispanic population in Texas would “make us a Democrat stronghold.”

The El Paso shooting has exposed long-simmering tensions between the state’s white Republican leadership and the Hispanic lawmakers and activists who have accused them for years of racist power plays. For years, the largely white Texas Republican leadership has worried that the increasing Hispanic population in the state will loosen their grip on power, and has described the problems of illegal immigration at the Texas border in alarmist terms.

So illegal immigration isn’t a problem on the Texas border?

And it has been more than talk: Texas Republicans have pushed to ban sanctuary cities as part of a so-called show-me-your-papers law, passed in 2017, that Democrats called anti-Latino....

The reporters do admit that things in Texas are a touch less cut-and-dried than feverish liberals might say:

....Republicans in state leadership have long enjoyed a measure of support from Latinos, who have often voted conservative on issues such as abortion and even border security....Mr. Abbott.... has enjoyed widespread support among Hispanic Texans, particularly those who live in the Rio Grande Valley region at the border....

To the paper’s disappointment, Republicans didn’t agree with the Democratic characterization of the letter as racist.

The El Paso gunman echoed talking points used in the past both by Mr. Trump and by Texas Republicans who have called for stronger measures against illegal immigration.

Extending the rhetorical blame game past the point of absurdity, Fernandez and Montgomery reached back 13 years (when the El Paso gunman was presumably in grade school) to flag the current Lt. Gov. Dan Patrick for using the words “invasion” and “overrun.”

The lieutenant governor, Dan Patrick, was quoted in The Texas Observer in 2006, when he was running for a State Senate seat, describing undocumented immigrants as invaders and saying that the main “problem we are facing is the silent invasion of the border. We are being overrun. It is imperiling our safety.”

Democrats and some political analysts are calling for Texas Republicans to back away from the language used in Mr. Abbott’s campaign letter and acknowledge the role that anti-immigrant rhetoric may have played in the attack.

The Times has historically been hypersensitive to Republican campaign mailings and tactics, finding racial and anti-immigrant tones in the most benign material. Meanwhile, offensive Democratic mailings either get a pass or the “Democratic” part gets completely blotted out of the story.