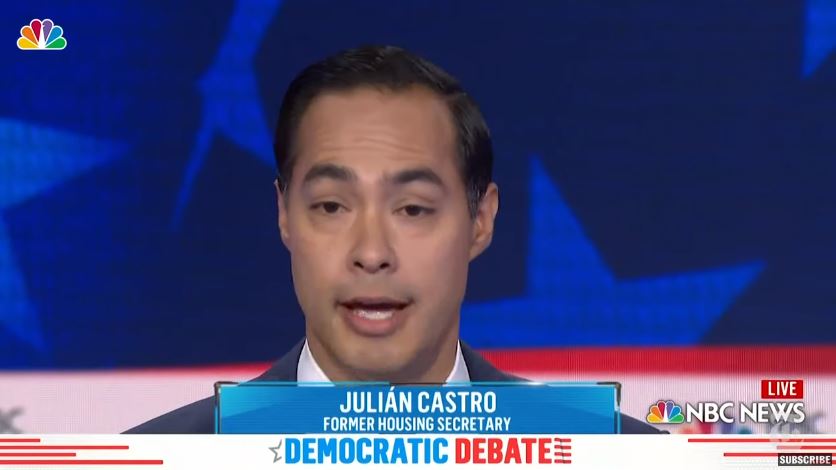 The New York Times may be trying to haul moribund Democratic presidential candidate Julian Castro over the line and onto the stage for the next debate (he’s malingering around 2% in the polls and needs one more “qualifying poll” showing to make the September debate).

The front page of Monday’s edition featured a profile of Castro by Amy Chozick, “He Had an ‘Obama Moment.’ His Supporters Want Another.” Chozick, the paper’s former Hillary Clinton-beat reporter, seems bent on providing that moment with her rags-to-riches gloss on Castro.

Castro, former mayor of San Antonio who then served three years as Secretary of Housing and Urban Development, is the twin brother of Rep. Joaquin Castro, who caused a flare-up when he personally shamed some of his constituents who had the audacity to participate in the political system by donating to the Trump re-election campaign. Joaquin broadcast their personal information on Twitter.

Chozick skipped that family drama, instead leading off with ancient history: Castro’s keynote address at the 2012 Democratic National Convention.

....He wanted to be well-rested before giving the biggest speech of his political career -- a speech that he and his family now remember as transforming everything.

“The next morning, when we walked down the street, he was just mobbed,” said Mr. Castro’s twin brother, Joaquin, who is a United States congressman. “It was this instantaneous example of how things can change so quickly.”

Mr. Castro’s speech, in a prime-time slot, burst him onto the national stage, just like the one that had catapulted Mr. Obama to superstardom in 2004. Mr. Castro symbolized a new moment in American politics: The grandson of a Mexican immigrant with a fourth-grade education, the young mayor talked about his family’s story, one so common for millions of Latinos and yet almost nonexistent at the highest level of national politics. “My family’s story isn’t special,” Mr. Castro said. “What’s special is the America that makes our story possible.”

Chozick regretted that the “Obama Moment” failed to pan out in 2012, but there's hope going forward thanks to that old speech.

After Mr. Castro’s solid performance in the first presidential debate in June, Democrats asked his finance chair, Scott Atlas, a lawyer in Houston, where he’d been hiding Mr. Castro. Mr. Atlas would go red in the face reminding them of his 2012 speech. “I said, ‘He’s been hiding in plain sight!’”

Even before the speech, Mr. Castro’s record as mayor, particularly his success implementing a universal pre-K program, had earned him national praise....

The Obama campaign had polled how several potential keynote speakers might go over, but Mr. Castro’s personal narrative -- the single mom, the bootstraps, the journey from public schools in a poverty-stricken, predominantly Hispanic area of San Antonio to degrees from Stanford and Harvard -- seemed like the best message.

In his 2020 campaign, Mr. Castro has led the party left in the immigration debate. He was the first candidate to propose repealing a section of the immigration laws that criminalizes illegal border crossings. It’s a position that some Republicans believe can be used against the Democrats in a general election where “decriminalization” likely won’t play as well as a proposal framed simply around ending family separations....

Open borders, in other words.

“Our current president, for whatever reason, has decided to paint brown people as dangerous and dirty and unwanted, so we need brown people represented,” said Patti Solis Doyle, a Democratic operative and one of Mrs. Clinton’s campaign managers in 2008.

Online donations in the two days after the June debate spiked 3,255 percent from the previous two days, according to the campaign. Caucusgoers started to show up in greater numbers to his town halls in Iowa. The merchandise on his website inspired by the Mexican lottery started to sell out.

That’s quite a lot of hype for a two percent candidate.