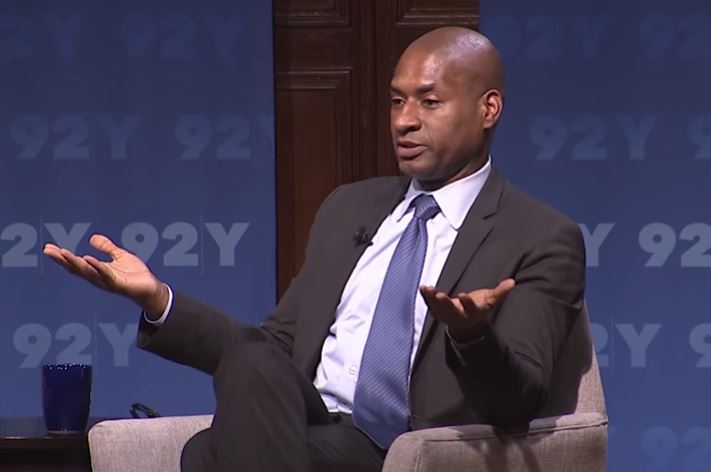 Two New York Times writers tried to use the mass shootings in El Paso and Dayton to condemn not just Donald Trump and his rhetoric, but the policies of the Republican Party in general.

Blow (pictured) tried to suggest Dayton shooter Betts was motivated by anti-black racism, ignoring his alleged Twitter account where, as NewsBusters Kristine Marsh pointed out, “he identified as a ‘leftist’ ‘atheist’ who wanted socialism, and he said he’d vote for Elizabeth Warren. In his tweets, he supported antifa using violence against ‘white supremacists’ and ‘right wingers’ even calling the antifa terrorist who attacked an ICE facility in Tacoma, Washington, a ‘martyr.’”

And then on Sunday, a 24-year-old man named Connor Betts opened fire in Dayton, Ohio, killing nine people and injuring at least 27 others. Most of those killed were black.

In his crazed worldview, the Republican Party and the murderous shooters are covering the same territory in tandem, locked in with identical ideological goals.

I think a better way to look at it is to understand that white nationalist terrorists -- young and rash -- and white nationalist policymakers -- older and more methodical -- live on parallel planes, both aiming in the same direction, both with the same goal: To maintain and ensure white dominance and white supremacy.

The policymakers believe they can accomplish with legislation in the legal system what the terrorists are trying to underscore with lead. In the minds of the policymakers, border walls, anti-immigrant laws, voter suppression and packing the courts are more prudent and permanent than bodies in the streets. But, try telling that to a young white terrorist who distrusts everyone in Washington.

Times former Washington Bureau chief David Leonhardt’s newsletter Monday similarly used the shooting in El Paso to accuse conservatives of having a violence problem in general: “Conservatism has a violence problem.” It’s an easier argument to make when you ignore most actual left-wing violence.

American conservatism has a violence problem.

The current secretary of energy, Rick Perry, once publicly suggested that the chairman of the Federal Reserve deserved to be beaten up because of his interest rate policy. Greg Gianforte, a member of Congress from Montana, physically assaulted a reporter who asked him a question he didn’t like. President Trump has repeatedly alluded to extrajudicial physical force, including suggesting that his supporters might resort to violence if they didn’t get their way.

Speaking of presidential rhetoric, Leonhardt has apparently forgotten President Obama’s saying during his 2008 campaign about Republicans, “If they bring a knife to the fight, we bring a gun” and called for Hispanic voters in 2010 to “punish their enemies.” Or any of these charming Democratic quotes, including some from Democratic congressmen

The most extreme version of conservatism’s violence problem is the most tragic: the pattern of mass shootings by people espousing right-wing views, sometimes encouraged in online forums.

.... liberal America also has violent and deranged people, like the man who shot at Republican members of Congress playing softball in 2017. Some Democratic politicians have also occasionally lapsed into ugly, violent rhetoric and suggested they want to punch their political opponents.

But it’s folly to pretend that the problem is symmetrical. Mainstream conservative politicians use the rhetoric of physical violence much more often...

Or perhaps it’s just covered more often. It was awfully odd that a story on political violence didn’t mention the left-wing thugs of Antifa who brutally beat conservative journalist (not just “rhetorically”) Andy Ngo this summer (not that the Times cared a whole lot).