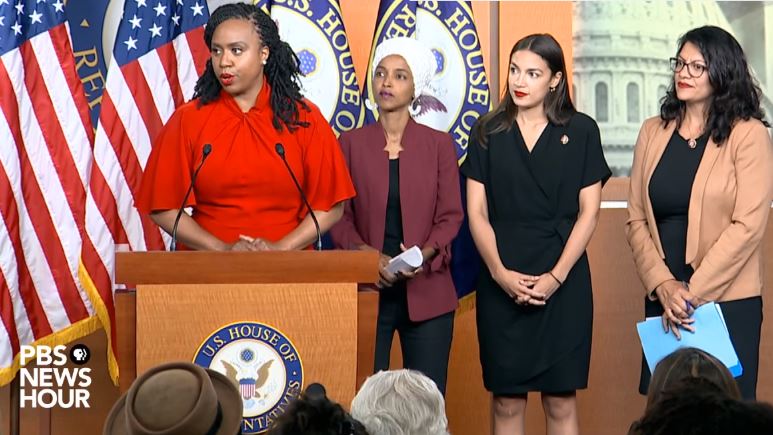 On Sunday, New York Times reporter Jeremy Peters found himself deeply disturbed by what he hinted was racist criticism of four new liberal congresswomen, who have risen as media heroines since being elected in 2018: “Nancy Who? The Right Finds New Liberal Foils In 4 Young Firebrands.” The text box: “‘Send her back’ is rapidly becoming the new ‘Lock her up.’”

After barely eight months in office, Ms. Ocasio-Cortez and three other progressive women of color have reached a level of notoriety that is virtually unheard-of for freshman House members, largely thanks to the kind of relentless conservative fire usually trained on far more senior Democrats.

Ms. Pelosi, the House speaker whose “San Francisco values” were the focus of tens of millions of dollars and nearly a decade’s worth of Republican attacks, is Public Enemy No. 1 no more. Even Hillary Clinton, who inspired President Trump’s crowds to thunder “Lock her up!” or Barack Obama, whose ethnic background drew false speculation about his citizenship and religion, are no longer inspiring the kind of vitriol the right has leveled at the four women.

....Their attacks on the congresswomen, with only a handful of dissenters, show how broadly accepted Mr. Trump’s racial and cultural instigations have become in the Republican Party.

“Politics is supposed to be about ideas,” said Mr. [Mark] Sanford, who won that election with the mock Pelosi debate in 2013 and served in the House until 2019 after losing to a more pro-Trump Republican in a primary. “What we’ve now done is to take it to another level, which is to say to some extent it’s about ideas, but it’s about personality more.”

“I never said Nancy Pelosi didn’t love America,” he added. “And I think that’s where some of this has been taken to levels that are dangerous.”

Mr. Trump has done little to discourage the demonization, and the attacks have metastasized....

But this story underlines the women are socialists and say controversial things about Israel and the Green New Deal -- ideas, not personalities. The hypersensitive Peters chalked up criticism and mockery of the four as “birther”-style racism.

The president has also had plenty of support from the conservative media. From Fox News, where Tucker Carlson has lent credence to unproven claims that Ms. Omar once married her brother, to the talk show host Rush Limbaugh, who for months has introduced Ms. Ocasio-Cortez by enunciating each syllable of her name with a mimicked Spanish accent, many conservatives depict the four women in a way that recalls how they questioned Mr. Obama’s loyalties and background....

(Peters may be another journalist who has never actually listened to Limbaugh’s show very much.)

In discussing their high "national profile," Peters ignored it wasn’t “the right” that elevated the four into stardom. Rolling Stone put the squad on its cover, and there has been massive mostly fawning coverage in other outlets, including the Times, which on Friday ran an op-ed from Rep. Omar herself.

The Times has also reliably defended Ocasio-Cortez from mean Republican attacks, even ones that didn’t actually happen. Rep. Tlaib has been fiercely defended as well.

Months before Mr. Trump started tweeting about the four -- telling them to “go back” if they did not like America and calling them racist, weak, anti-American and “not very smart” -- conservatives had been watching them closely and covering their public remarks with an intensity that far surpassed the coverage that most of the two dozen Democratic candidates for president were receiving. The congresswomen sometimes did themselves no favors.

Again, it’s odd for a Times reporter to criticize others for watching “The Squad” closely and “covering their public remarks” intensely, given that the press has been doing the same thing for the last two years, only in a far more fulsome fashion.

Ms. Ocasio-Cortez’s identification as a democratic socialist, and her huge profile on social media, made her catnip for the right. She became a national media sensation after her stunning upset of a white male Democrat who had represented her district for nearly two decades. But the mentions of her in right-leaning media -- hardly ever presented in a flattering light -- proliferated after she led the public relations efforts behind the Democrats’ Green New Deal, a progressive proposal to fight climate change.

But by then, more people already had an unfavorable impression than a positive one, polls showed. After Ms. Ocasio-Cortez’s office published talking points that contained an aside about getting rid of “farting cows and airplanes,” conservatives pounced, incorrectly claiming that Democrats would end commercial aviation and stop beef production.