Reporter Emily Cochrane was all gushing in Friday’s edition: “‘People Listen to Her’: House’s Voice of Fervor, And Reason, on Border.” The text box: “A Texas Latina’s rise in prominence has led to threats against her.” The Times only seems to find threats to politicians newsworthy when liberals are being threatened. 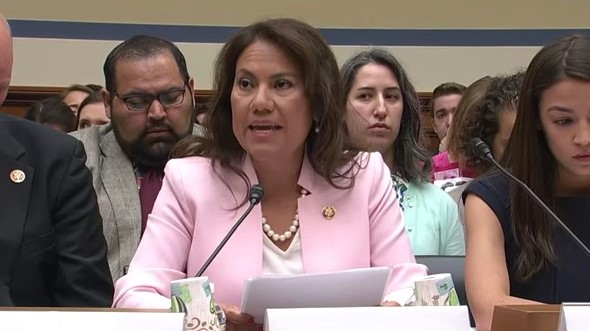 Ms. Escobar, one of the first of two Latina women to represent Texas in the House, has become a leader in the bruising, emotional border debate on Capitol Hill. Elevated as a voice of authority by Speaker Pelosi, Ms. Escobar has been passionate but also less confrontational than some of the other freshmen when highlighting President Trump’s hard-line immigration policies.

On Friday, she will take another televised star turn as one of the main witnesses at a House Oversight and Reform Committee hearing on migrant child separation. Her proposal, aimed at toughening oversight provisions for the Department of Homeland Security, is one of the pieces of immigration legislation that Ms. Pelosi plans to move forward.

Ms. Escobar’s prominence and activism have opened her up to attacks. On Monday, she said she was receiving death threats because of reports that her office was coaching asylum-seekers in Mexico to help them return to the United States, reports she dismissed as “fueled by xenophobia and misinformation.”

But was her office coaching asylum seekers in Mexico? Apparently so, but the Times shrugged it off. Escobar fought back on Twitter against a Washington Examiner report, “Democratic congresswoman secretly sending staff into Mexico to coach asylum-seekers,” but didn’t deny it.

Hours after her encounter with Fatima, Ms. Escobar and her husband, a federal immigration judge, were at the minor league El Paso Chihuahuas baseball game, an annual ritual to celebrate their anniversary, when tears began to roll down the congresswoman’s cheeks as triumphant fireworks burst overhead. Her mind had returned to Fatima and all of the migrants she had seen in Mexico, she said, and the detained women who had wept in the arms of lawmakers two days earlier at El Paso Border Patrol Station No. 1 in Texas.

But the bruising debate and its rancorous aftermath have made her job much more difficult. She must counter what she sees as ever-more distorted misconceptions about the border from the right while beating back angrier calls from the left to strip all funding from immigration enforcement agencies.

As antagonists heckled “One-Term Veronica” and taunted Ms. Escobar for appearing to support migrant children more than El Paso’s children, Representative Rashida Tlaib, Democrat of Michigan, yelled across the podium that “Veronica Escobar is the best goddamn congresswoman” to emphatic nods from her colleagues.

As the group of lawmakers drove away, the screams of the protesters fading behind them, Ms. Escobar could be seen through a van window, pressing her hands together in prayer and thanking the agents escorting them.

Notice how the Times reliably gets religion when it’s being used for leftist ends.

The next day, Cochrane and Zolan Kanno-Youngs teamed up to cover the actual congressional hearings, “Heated Hearing Over Family Separations,” focusing on another liberal heroine, Alexandria Ocasio-Cortez.

At least 18 infants and toddlers younger than 2 years old were separated from their parents for at least 20 days because of the Trump administration’s “zero tolerance” policy at the southwestern border, according to a report released on Friday by a House committee [led by which party?].

The report was made public Friday before a heated House oversight hearing on the administration’s family separation policy. Lawmakers heard from a handful of their colleagues, and multiple immigration lawyers and officials, including Thomas D. Homan, the former acting head of Immigration Customs and Enforcement, and Jennifer L. Costello, the acting inspector general for the Department of Homeland Security.

But Mr. Homan, a supporter of the administration’s policies who frequently appears on Fox News, said “Border Patrol and ICE are merely enforcing the laws enacted by Congress.”

“They are doing the best they can under the circumstances,” he added. Pressed by Representative Alexandria Ocasio-Cortez, Democrat of New York, he acknowledged that at one point he had recommended the zero-tolerance policy.

But there was far more to the exchange than that, as the Daily Caller documented, and none of it made Ocasio-Cortez look impressive. Homan pointed out that U.S. citizen families are separated all the time during arrests, that being in the country illegally is a violation of the U.S. Code, and that asylum must be sought through a port of entry.

And Ms. Ocasio-Cortez took the unusual step of being sworn in under oath before detailing what she had seen on the border, to counter Republicans who said she was misrepresenting the conditions in Border Patrol facilities.

While Cochrane liked Ocasio-Cortez’s swearing-in stunt, just last month Cochrane took the directly opposite approach to a grandstanding Republican in “At Demand for Roll Call Votes, Colleagues Grouse: ‘This Is So Stupid.’” Republican congressman Chip Roy of Texas had insisted on roll-call votes on amendments before the House. The text box quoted one of Roy's colleagues: “All he’s doing is making everybody mad.”