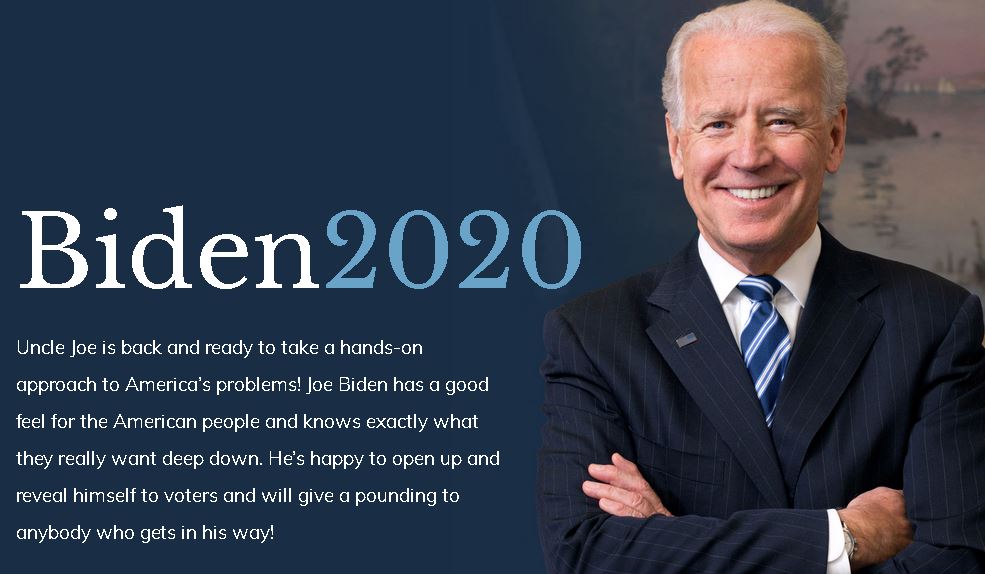 Reporter Matthew Rosenberg got his feelings hurt over a parody Joe Biden website, on the front of Sunday’s New York Times: “The Deception Of a Biden Site That’s Not His.” He devoted 2,400 words of investigative reporting to finding the name behind a website with the audacity to mock a Democrat (only the Times is allowed to mock Biden), even suggesting the harmless site was akin to Russian disinformation.

Rosenberg didn’t see the funny side:

For much of the last three months, the most popular Joseph R. Biden Jr. website has been a slick little piece of disinformation that is designed to look like the former vice president’s official campaign page, yet is most definitely not pro-Biden.

From top to bottom, the website, JoeBiden.info, breezily mocks the candidate in terms that would warm the heart of any Bernie Sanders supporter: There are GIFs of Mr. Biden touching women and girls, and blurbs about his less-than-liberal policy positions, including his opposition to court-ordered busing in the 1970s and his support for the Iraq war. Pull quotes highlight some of his more famous verbal gaffes, like his description of his future boss, Barack Obama, as “articulate and bright and clean.” The introductory text declares, “Uncle Joe is back and ready to take a hands-on approach to America’s problems!”

All the site says about its creator is buried in the fine print at the bottom of the page. The site, it says, is a political parody built and paid for “BY AN American citizen FOR American citizens,” and not the work of any campaign or political action committee.

There is indeed an American behind the website -- that much is unambiguously true. But he is very much a political player, and a Republican one at that. His name is Patrick Mauldin, and he makes videos and other digital content for President Trump’s re-election campaign....

A Republican making humorous anti-Democratic digital content? Hold the front page! (Which they did.)

Yet in anonymously trying to exploit the fissures within the Democratic ranks -- fissures that ran through this past week’s debates -- Mr. Mauldin’s website hews far closer to the disinformation spread by Russian trolls in 2016 than typical political messaging. With nothing to indicate its creator’s motives or employer, the website offers a preview of what election experts and national security officials say Americans can expect to be bombarded with for the next year and a half: anonymous and hard-to-trace digital messaging spread by sophisticated political operatives whose aim is to sow discord through deceit. Trolling, that is, as a political strategy.

The Times really raised the stakes of the import of the amusing website into something akin to Russia's disinformation campaign.

Mr. Ducklo sought to place the website firmly in the context of Mr. Trump’s own social media habits -- such as tweeting doctored videos -- and what he said was the president’s lack of interest in measures to ensure the integrity of American elections.

Mr. Mauldin insisted there was nothing duplicitous about it. “I don’t make any claims on the site to lean one way or the other,” he said, adding, “Facts are not partisan.”

Meddling by foreigners is illegal. But trolling or disinformation spread by American citizens is protected by the First Amendment, and if Mr. Mauldin’s work is any guide, Americans may well do a far better job deceiving one another than any Russian troll could hope for.

He huffed: "...The New York Times is not linking to Mr. Mauldin’s websites to avoid further boosting them in search rankings."

Mr. Goldstein’s firm, Tovo, tried to prove as much during Alabama’s special Senate election in 2017. With targeted ads, Tovo led conservative Republicans to a website featuring articles by conservatives who opposed the far-right candidate, Roy Moore....

Yet somehow “voter suppression” tactics are more acceptable when coming from a Democrat. Rosenberg offered weak arguments in defense of Tovo.

Unlike Tovo, Mr. Mauldin makes no claims of trying to prove any concepts, and he had no intention of outing himself....

Pressed on whether he thought they were deceptive, Mr. Mauldin complained that people put too much emphasis on identity “instead of examining the facts themselves.” He brushed off a question about whether GIFs of Mr. Biden touching women, devoid of any context, represented facts.

The Times is awfully “touchy” regarding complaints about Biden’s handsy ways.

Liberals have a long history of creating ostensibly humorous and “satirical” websites aimed at Republican politicians, without raising the ire that the anti-Biden site instigated among the humorless scolds at the Times.