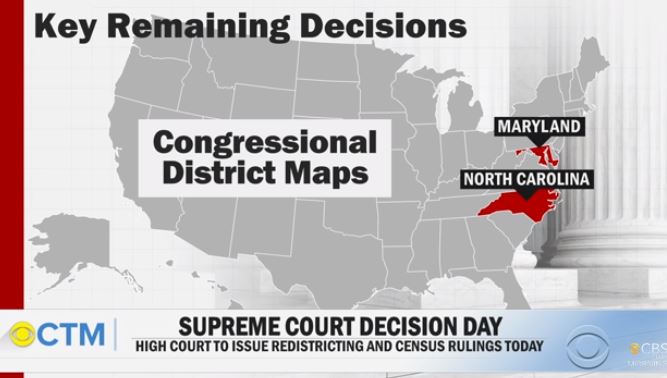 The Supreme Court made two important political rulings this week -- on “gerrymandering” and a proposed citizenship question for the U.S. Census, and the New York Times gave them lead story status Friday under the banner headline, “Court, Ruling 5-4, Gives Green Light To Gerrymander.” Reporters Michael Wines and Adam Liptak portrayed Democrats as victims of Republican perfidy.

Liptak’s story dealt mainly with the Trump administration’s proposed citizenship query being blocked from the 2020 Census form, but he also revealed the paper’s convenient concern over “gerrymandering,” or legislative manipulation of voting districts for partisan advantage.

The gerrymandering decision was momentous, definitively closing the door on judicial challenges to voting maps warped by politics. The practice of redrawing the boundaries of voting districts is almost as old as the nation. Both parties have used it, but in recent years, Republicans have been the primary beneficiaries.

Which is doubtless why that “in recent years” the liberal media has been making a stink over it, while politely ignoring the “warping” during the Democrats' long dominance of the House of the Representatives.

But wait a minute -- somehow, in this tale of Republicans manipulating district borders, Liptak never mentions there were two gerrymandering cases before the high court -- one with the North Carolina Republicans, the others with the Maryland Democrats. In Annapolis, they redrew lines so longtime Republican Rep. Roscoe Bartlett couldn't win any more.

The headline to Michael Wines' piece may have split the partisanship up (“Partisan Fight to Tilt the Playing Fields May Intensify”) but his actual story put the partisan blame solely on the Republicans, with the poor Democrats having to resort to playing defense. Once again, Maryland was omitted!

The rulings by the Supreme Court on Thursday in bitterly contested battles over partisan gerrymandering and the addition of a citizenship question to the 2020 census grappled with issues fundamental to the nation’s democracy: How power is allocated, and ultimately, how much of a voice the American people have in selecting their leaders.

But far from settling these questions, the court has unleashed even higher-pitched and partisan struggles over once-settled aspects of the country’s governance, placing greater pressures on the nation’s political system.

Gerrymandered maps were once part of an unspoken agreement between rivals that pressing for political advantage was, within limits, part of the electoral game. But in recent years Republicans, aided by sophisticated mapmaking software, have given themselves near-unbreakable power across the country.

So "unbreakable" that the Democrats took the House of Representatives back last year!

Now, with a green light from the justices, the party has an opportunity to lock in political dominance for the next decade in many of the 22 states where it controls both the legislature and the governor’s office.

Democrats are portrayed as passive, innocent bystanders to the Republican onslaught.

The decision will almost certainly force Democrats, who control 14 statehouses, to reconsider their belated crusade against gerrymandered maps and begin drawing their own -- an eat-or-be-eaten response to Republican success in gaming the redistricting process.

“All of this is an example of what we call constitutional hardball -- measures that are entirely legal but run up against the norms for partisan advantage,” said Steven R. Levitsky, a Harvard University professor of government and a co-author of the recent book “How Democracies Die.” “It’s basically dirty politics without being illegal politics.”

Mr. Levitsky and others say partisanship -- the conviction that the other party is an enemy that must be crushed -- is the driving force behind such tactics. He and other scholars say the Republican Party has embraced rule-breaking as a political tactic.

But hardball is a tit-for-tat measure, he said, and the Republicans’ flouting of the rule book is already prompting Democratic talk of similarly tough tactics like packing the Supreme Court, and has spawned a movement to override the Electoral College....

Richard Fausset followed up with “With No Supreme Court End to Gerrymandering, Will States Make It More Extreme?” This one may have been the silliest, as Fausset focused exclusively on North Carolina, and completely ignored Maryland:

For most of this decade, North Carolina Democrats have complained that the Republican-led legislature has aggressively altered the state’s voting rules and redrawn electoral maps to secure an overwhelming partisan advantage.

On Thursday, the United States Supreme Court said it couldn’t do anything about it.

The decision by the justices not to intervene in even the most blatant partisan gerrymanders was a letdown to many liberals in this evenly divided purple state, where substantive policy battles often feel overshadowed by knife-fighting over the rules that govern democracy itself.

At least Fausset lets this bit of balance through:

Over the years, North Carolina has been consumed with numerous changes to political boundaries, legal challenges and associated vitriol. Democrats have accused Republicans of racism and drawing lines to minimize minority votes. And Republicans have accused Democrats -- who effectively ran the state for decades -- of hypocrisy, noting that they, too, actively engaged in gerrymandering once upon a time.

A “time” that the Times has completely forgotten.