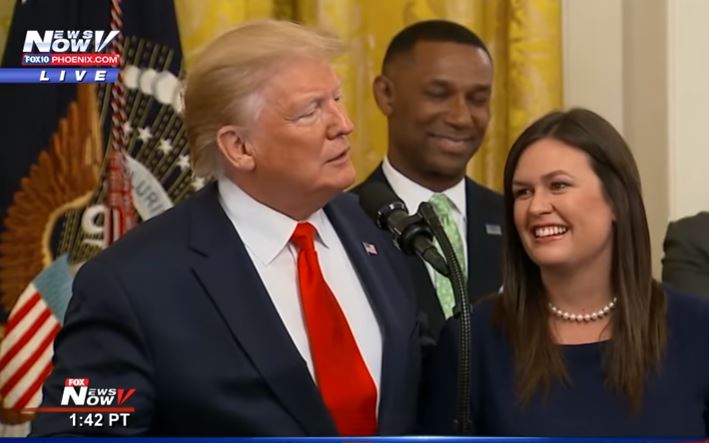 New York Times reporter Shawn McCreesh was amazed, and perhaps slightly appalled, to catch some White House reporters being civil to the recently resigned White House press secretary, by actually (gasp!) attending her farewell drinks party: “Toasting Sarah Huckabee Sanders. By the Press. Really.” The subhead to the online-only report: “‘You’d better not say I was here,’ said one White House reporter, who attended the awkward drinks at a nearby steakhouse.”

Can one imagine a Times reporter reacting in horror at the sight of reporters rallying around a resigning press secretary for say, Barack Obama (Jay Carney, who served in that capacity, was a former Washington bureau chief at Time magazine)?

There’s an old maxim about the press, sometimes attributed to H.L. Mencken: “Journalism is to politician as dog is to lamp post.” That’s why eyebrows were raised last night when the dogs hosted a party for a lamp post, with some of journalism’s loudest barkers gathering for Sarah Huckabee Sanders, the outgoing White House press secretary.

So how could this happen?

Maybe it was a case of Stockholm syndrome. Certainly, it was an odd sight: journalists turning out to raise a glass to the unflinching defender of a president who accuses the media of being “the enemy of the people” or worse.

For the demoralized herd of reporters who have spent the last two years being smacked around by Ms. Sanders, her last hurrah was just another happy-hour opportunity to source up.

By 7 p.m., some 50 people piled in, knocking back beer and bar nuts. Presidential punching bags from The Washington Post and Reuters mingled with Trumpian camarilla including Hogan Gidley, the deputy press secretary, and Mercedes Schlapp, the director of strategic communications.

Note: "Camarilla" is a Spanish word for a group of courtiers surrounding an overlord, and often carries a sinister connotation.

Still, some fretted about the optics. The tango between the press and politicians in the capital is always complex, but that relationship borders on toxic in the Trump era. Even for clubby Washington, it could be a bad look to clink glasses for a woman who rode shotgun for a president who refers to the media with a Stalinist epithet.

“You’d better not say I was here,” one reporter said. “Me either,” said another. When asked why it was appropriate for journalists to attend a party for Ms. Sanders, John Roberts, the chief White House correspondent for Fox News, said, “I need to clear any comments with my media relations team.”

And yet, it’s not unheard-of for the White House press corps to pour one out for the top flack. When reached by phone, Ari Fleischer, the press secretary to President George W. Bush until 2003, said there was nothing abnormal about the ritual.

McCreesh used the chance to take a wholly unrelated cheap shot at Ari Fleischer, based on events from 15 years ago.

Mr. Fleischer, who helped sell the “cakewalk” Iraq war by saying things like “there is already a mountain of evidence that Saddam Hussein is gathering weapons for the purpose of using them,” recalled reporters wheeling an actual cake into the briefing room to celebrate with him on his final day in the role.