NYTimes’ Candidate Questions Betray Lefty Worldview: 'In Ideal World, Would Anyone Own Handguns?' 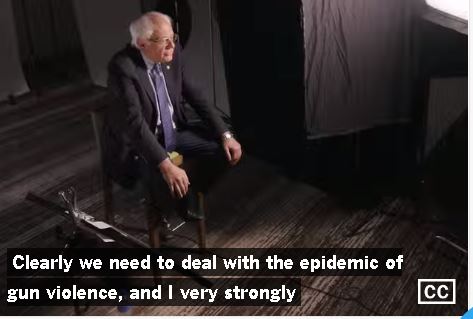 The New York Times posed a set of predominantly (9-to-1) left-wing questions to all the Democratic presidential candidates and invited them to answer on video. Only Joe Biden declined to participate. Their answers are all available on video clips, if you wish.

The project credits list include two familiar name of reporters, suggesting they had a hand in forming the lefty questions: Alexander Burns and Sydney Ember, both of whom have made multiple appearances on NewsBusters.

Another name is Jonah Kessel, the Director of Cinematography for the project. Kessel is also listed under the Reporters/Producers rubric. Kessel donated to Bernie Sanders in 2016. Sanders of course is one of the Democratic candidates featured (no disclosure of the donation was spotted on the lead interactive page or in Sanders’ lead-off video).

There was a distinct, undeniable hard-left lean to the questions. Of the set of 18 questions, fully half (nine) were left-leaning, and only one classified as right-leaning. Two were classified as neutral, while the remaining six were slotted as more personal or light-hearted questions.

Here are the nine “left-leaning” questions posed to each candidate, with the numbers indicating the order in which they were asked, each one either reflecting a liberal view on an issue or pressing the candidate to adopt one.

1. In an ideal world, would anyone own handguns?

2. Would your focus be improving the Affordable Care Act or replacing it with single payer?

3. Do you think it’s possible for the next president to stop climate change?

4. Do you think Israel meets international standards of human rights?

6. Would there be American troops in Afghanistan at the end of your first term?

11. Do you think President Trump has committed crimes in office?

14. Are you open to expanding the size of the Supreme Court?

18. Does anyone deserve to have a billion dollars?

The one right-leaning question:

8. Do you think illegal immigration is a major problem in the United States?

And the two classified as neutral:

9. Where would you go on your first international trip as president?

12. Do you support or oppose the death penalty?

The remaining six tended toward the silly side, e.g. “16. What is your comfort food on the campaign trail?”