The press rose as one in outrage Wednesday upon learning that Fort Sill, an Army base in Oklahoma, which is being used as a temporary shelter for migrant children, had been used as a Japanese internment camp during World War II.

Both Time magazine and the Associated Press were hailed by other outlets for first reporting this “news” about the internment link -- done of course during the wartime command of Democratic hero president Franklin Roosevelt, though none of the stories going after Trump mentioned that inconvenient part of the history lesson.

Another fact buried and downplayed: Fort Sill was also used to hold migrant children as recently in 2014, under the administration of one Barack Obama. But at the time, it seems that zero media outlets who covered the controversy made the connection between World War II internment and the Obama administration’s housing of migrant children. Only when the Trump administration does it, does that history suddenly turn relevant. 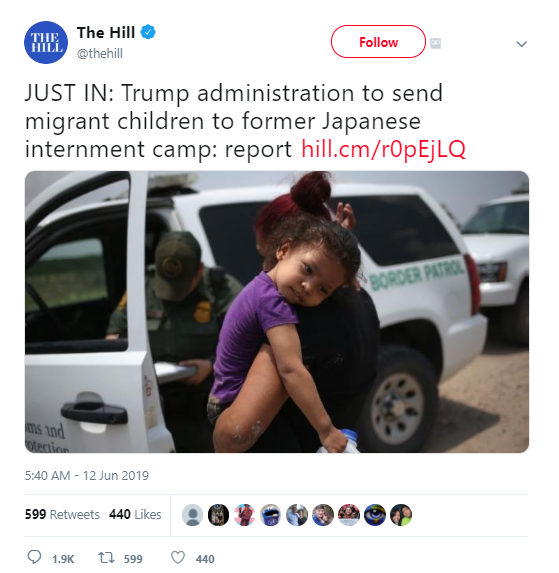 The Associated Press took the prize with Wednesday’s “Oklahoma Base Set for Migrant Site Was WWII Internment Camp,” which eventually managed to report that Fort Sill had held migrant children in 2014 without even mentioning the Obama administration:

A U.S. Army base in Oklahoma that the federal government selected as a temporary shelter for migrant children also held hundreds in a Japanese internment camp during World War II.

Historical data from the National Park Service and private organizations show Fort Sill was among at least 14 Army and Department of Justice facilities nationwide where Japanese Americans and Japanese immigrants were interred. The Army's War Relocation Authority held about 120,000 Japanese and Japanese Americans in "relocation centers" during the war with Japan.

The Office of Refugee Resettlement plans to house up to 1,400 migrant children at Fort Sill, near Lawton, Oklahoma. The base also served as a temporary shelter for unaccompanied migrant children in 2014.

USA Today got in on the irresponsible act: “Trump administration to house migrant children at Fort Sill, which once served as a Japanese internment camp.” Paragraph five contained the caveat: “This is not the first time the federal government has used military bases for migrant housing. The Obama administration used Fort Sill and other bases to house migrant children from Central America during a 2014 influx but closed the facilities following a public backlash.”

Time magazine’s headline was similar: “Trump Administration to Hold Migrant Children at Base That Served as WWII Japanese Internment Camp.” The mild caveat appeared in paragraph six of eight: “Using military bases in this way is not new. In 2014, the Obama Administration placed around 7,700 migrant children on bases in Texas, California and Oklahoma, including Fort Sill. The temporary shelters were shuttered after four months....”

The Washington Post: "Geronimo and the Japanese were imprisoned there. Now Fort Sill will hold migrant children – again.” Reporter Gillian Brockell at least aired out the forgotten 2014 controversy somewhat:

This isn’t the first time that Fort Sill has been used this way, though. During the Obama presidency, unaccompanied children were housed there for four months. At the time, Oklahoma Gov. Mary Fallin (R) blamed Obama’s “failed immigration policies," saying, “It is alarming to have 1,200 children in a military Installation.”

Perhaps the most brazen example of bias was the tweet from The Hill, which didn’t even mention the army base part: “JUST IN: Trump administration to send migrant children to former Japanese internment camp.” The third paragraph admission of context was benign. Back then it was a "shelter": “The site also was used as a shelter in 2014 under the Obama administration."

As Wall Street Journal’s media-bias maven James Taranto said of The Hill’s tweet, “Here's an example of how to lie by omission.”