New York Times columnist Michelle Goldberg went way out on the post-Mueller report ledge for everyone to see, on the front of the paper’s Sunday Review, telling Democrats to get on with it and send Trump to prison: “Why Aren’t We on the Road to Impeachment?”: 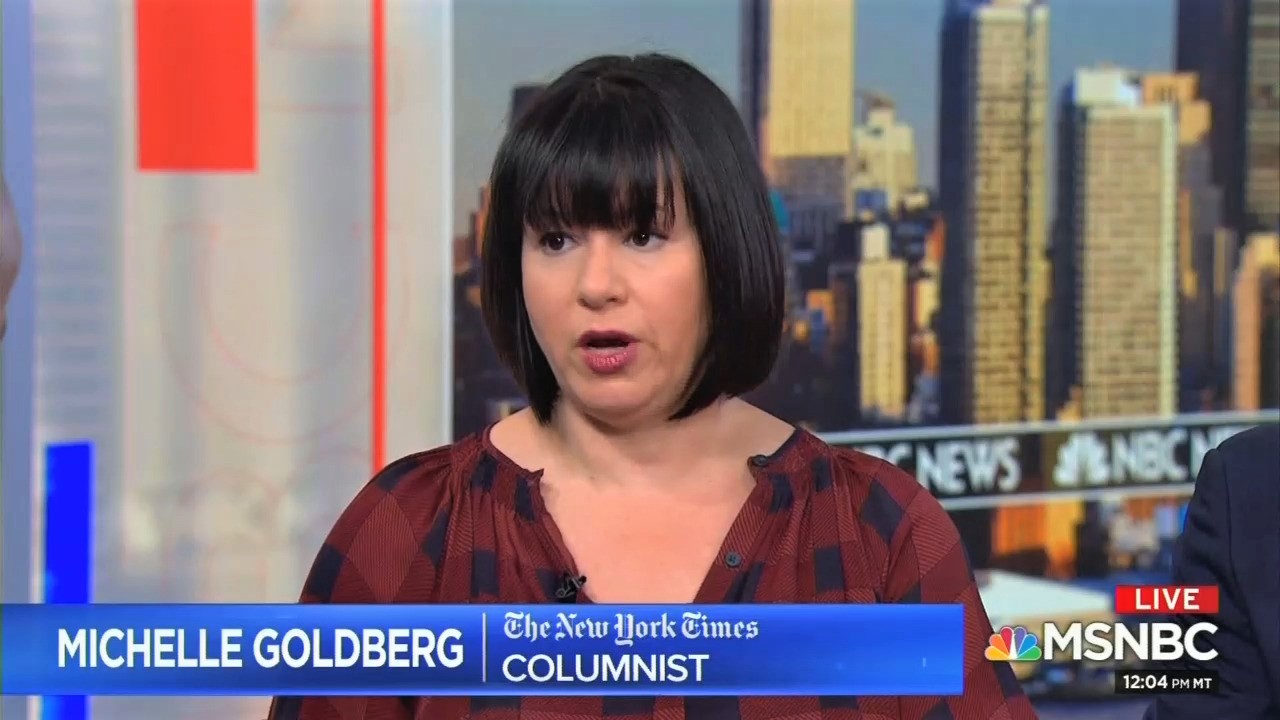 In 2017, a brilliant visual effects expert created a video montage called “It’s Mueller Time! Trump Administration Season Ending.” Set to the crooning of the 1963 song “From Russia With Love,” it shows F.B.I. agents rounding up the central figures who brought us Donald Trump’s presidency, culminating in Trump himself being led away with his hands behind his back.

Goldberg probably confessed too much here -- it conjures up the pathetic image of a Times columnist constantly refreshing a YouTube video, to leer over the fake arrests of her political opponents (the clip is not all that “brilliant” in execution, either) (click “expand” and, as always, emphasis mine:

I’ll admit to having watched this over and over again; it’s one of the most satisfying bits of wish fulfillment I’ve ever seen. Wish fulfillment is all it was, though. It’s a national disgrace that Trump sleeps in the White House instead of a federal prison cell, but it has been a while since I had any expectation that the special counsel Robert Mueller’s findings, many of which were finally released to the public on Thursday, could set things right...

There are a lot of reasons Trump’s election remains a festering wound. It was a horrifying shock to many of us and, given his decisive loss in the popular vote, an insult to democracy. But there was also so much destabilizing weirdness surrounding it....

At the same time, the new administration unleashed on the public a degrading cacophony of lies, of the sort many of us associate with authoritarian countries like Russia. The day after the new president was sworn in, Sean Spicer, Trump’s first press secretary, stood in the White House briefing room and insisted that the inauguration crowd had been unprecedented in size. This was terrifying, despite the petty stupidity of the untruth, because Americans were not yet used to being told to believe government diktats over the clear evidence of their senses.

This quickly became our new normal. Once Republicans realized the power they could amass by collaborating in Trumpian mendacity, most of them gleefully abandoned any sense of epistemological solidarity with their fellow Americans....

Weeks before anyone else could read the report, he tried to close the door on obstruction, implying falsely that Mueller meant to leave the decision to him. In a news conference on Thursday, Barr repeatedly said that Mueller had found no “collusion” between the Trump campaign and Russia. Mueller, however, never examined the case through the lens of “collusion,” which isn’t a term in criminal law....

Denying the connotations of the suddenly problematic word “collusion” is strange coming from Goldberg, who in May 2018 wrote:

In reality, as the meticulous Democratic response to the Republican report makes clear, there’s already overwhelming evidence of the Trump campaign’s collusion with Russia.”

The column’s text box: “Are Republicans covering up evidence of collusion?” Another from Goldberg: “Is This the Collusion We Were Waiting For?”'

Back to Sunday, she flirted with calling Trump a traitor:

But most people aren’t going to read the nearly 500-page report. Republicans have already seized on Barr’s words -- and on the lack of criminal charges in a document that was never going to contain criminal charges -- to claim total vindication for Trump. The president’s manifest disloyalty to the country in trying to halt an investigation into a foreign attack on an American election is, to the right, of no account....

And to top it all off, Goldberg went full “totalitarian” near the end of her screed:

Compounding the problem, Republicans are willing to act unilaterally on their perception of reality, but Democrats are not. As Hannah Arendt wrote in 1951, “Totalitarianism will not be satisfied to assert, in the face of contrary facts, that unemployment does not exist; it will abolish unemployment benefits as part of its propaganda.” The same logic underlies Republican threats to actualize fantasies about an attempted deep-state coup by opening an investigation into the Mueller investigation’s origins.