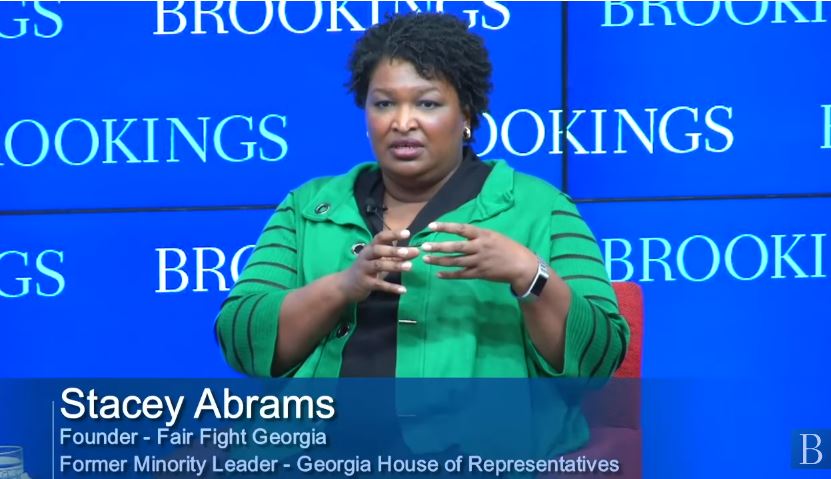 Democrat Stacey Abrams hasn’t actually won anything, but reporter Jennifer Schuessler made the front of the New York Times Arts section Wednesday to call her yet again a political “rising star” in “A Date With History For Stacey Abrams -- Scholars offer context on voter suppression in a conversation with a rising Democratic star.”

Abrams lost her 2018 Georgia governor’s race to Republican Brian Kemp -- but not actually conceding, and making unsubstantiated allegations of voter suppression, cheered on by the Times, which reacted in horror when Trump indirectly hypothetically suggested he might do so, before winning the actual election fair and square.

At the Times, that record makes her a “rising star” in the Democratic Party. Apparently if you’re a Democrat, you win even when you lose.

Since her book “Lead From the Outside” came out in paperback last month, Stacey Abrams has been showing up in places befitting a woman whose razor-thin loss in the 2018 Georgia governor’s race turned her into a national political star.

With ample help from admiring stories like this one. Abrams regularly makes unsubstantiated allegations of voter suppression from her November race, and is rewarded with oh-so-objective headlines like this: “Stacey Abrams Isn’t Running for President. Should She Be?”

On Morning Joe, she parried questions about a possible presidential run. On The Late Show, Stephen Colbert surprised her by reading from one of the romance novels she has published under a pseudonym.

But last Friday, Ms. Abrams dropped in on a much quieter venue: the Library Company of Philadelphia, founded in 1731 by Ben Franklin, which bills itself as the oldest cultural institution in the United States.

It wasn’t a stop on Ms. Abrams’s book tour. Instead, she was there to participate in an intimate two-hour conversation about the history of voter suppression with four leading scholars. It will be published next year by the University of Georgia Press as part of a new series called History in the Headlines, which aims to bring historical expertise to bear on today’s most hotly debated issues.

The Trump era has been a red-alert moment for many historians, who have mobilized in the classroom, on op-ed pages and on social media to combat what they see as the erosion of democratic norms and an attack on truth itself.

Among the hallowed "dream team" recruited to pay tribute to Abrams and her conspiracy theories about her stolen victory was liberal historian “Kevin M. Kruse, who has become famous for his epic Twitter threads smiting the dubious historical claims of pundits and politicians.”

Schuessler failed to bring up Abrams’ inconvenient and in retrospect highly hypocritical tweet about Trump. Abrams tweeted this in October 2016, a couple of weeks before Donald Trump’s shocking victory:

But when it’s a Democrat attacking an electoral victory by a Republican? Then everything’s fine.

Before the event, they seemed galvanized at the prospect of talking with someone who has, as Dr. Kruse put it, skin in the game.

“When the email went out saying she was coming, I was like --,” Dr. Anderson, a professor at Emory University, said, clutching her heart. A few minutes later, Ms. Abrams approached.

“I just thank you for what you do,” Dr. Anderson said, introducing herself. “You just bring it, in whatever forum. You bring it.” [Italics in the original.]

Asked why she wanted to take time out from her public schedule to participate, Ms. Abrams -- a Democrat who has called her loss “fully attributable to voter suppression” -- said she welcomed the context historians brought to what she has made a signature issue.

In the midst of channeling the "palpable admiration in the room for Ms. Abrams," Schuessler and the Times ignored the actual turnout numbers in Georgia in 2018: they surged to 57 percent of voters -- "near presidential election rates." That tends to undercut the "voter suppression" complaints. The "truth itself" is something they don't always highlight.