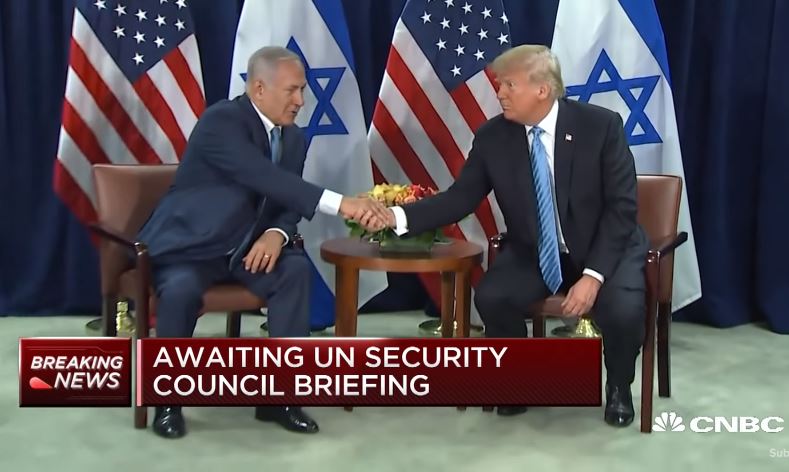 Halbfinger spun that seemingly flattering factoid in the most cynical and hostile way (it is Israel, after all, the paper’s least favorite country), comparing Trump and Israel’s embattled Prime Minister Benjamin Netanyahu so that neither came off well at all.

This particular treatment of an American president’s popularity overseas was quite unlike how the paper celebrated President Barack Obama locking up the Paris slum vote, or candidate Obama’s “tone poems” delivered to a rapturous crowd in Berlin.

Giant campaign billboards went up in Tel Aviv and Jerusalem a month ago showing the prime minister and the president shaking hands and grinning under the words “A Different League,” implicitly dismissing Mr. Netanyahu’s challengers as amateurs. Hours before Israel’s attorney general announced his intention to indict Mr. Netanyahu on corruption charges last month, Mr. Trump told reporters in Vietnam that the Israeli leader was “tough, smart, strong” and “has done a great job as prime minister.”

All of this is of great help to Mr. Netanyahu with voters in Israel, where polls show Mr. Trump is admired more than in almost any other country. Israelis have ample reason to view the president favorably: His administration has showered Mr. Netanyahu with gift after politically charged gift, including moving the American Embassy to Jerusalem, repeatedly cutting aid to the Palestinian Authority, and embracing Israel’s argument that millions of Palestinians should no longer be counted as refugees.

It’s gotten to the point that analysts tracking the American assistance to Mr. Netanyahu’s campaign have taken to guessing what Mr. Trump might toss his way next: merely more plaudits, or perhaps a meatier bone, like endorsing Republican-sponsored legislation to recognize Israeli sovereignty over the Golan Heights.

After admitting “There is nothing unheard-of about a president trying to influence an Israeli election,” he claimed there was “no antecedent for the kind of feedback loop at work between Mr. Trump and Mr. Netanyahu.”

Another awful way Trump and Netanyahu are alike is that they both dare criticize hostile media.

It’s hard to know if “witch hunt,” the term both use to discredit the investigations clouding their administrations, is being thrown around more by Mr. Netanyahu in Hebrew or by Mr. Trump in the original English. Mr. Netanyahu does not bother to translate “fake news” in his frequent social-media posts. Mr. Trump calls some news organizations “enemies of the people,” while Mr. Netanyahu ran ads singling out Israeli journalists and vowing, “They will not decide” the election. Even his “indispensable man” strategy evokes Mr. Trump’s 2016 nomination speech, “Only I can fix it.”

This was a loopy sentence.

Yet much as Muddy Waters anticipated Mick Jagger, Mr. Netanyahu was thrilling Israeli audiences with a visceral blend of populism, ethnic resentments and media-bashing fully 20 years before Mr. Trump first took that brand of politics to the big time.

Mr. Netanyahu may still prevail on April 9, but given Mr. Gantz’s promise to refuse to enter a coalition with him, Mr. Netanyahu would be forced to assemble a governing majority even further to the right than his current one.

Halbfinger has previously parroted talking points of the anti-Jewish terrorist group Hamas in his coverage from Israel.