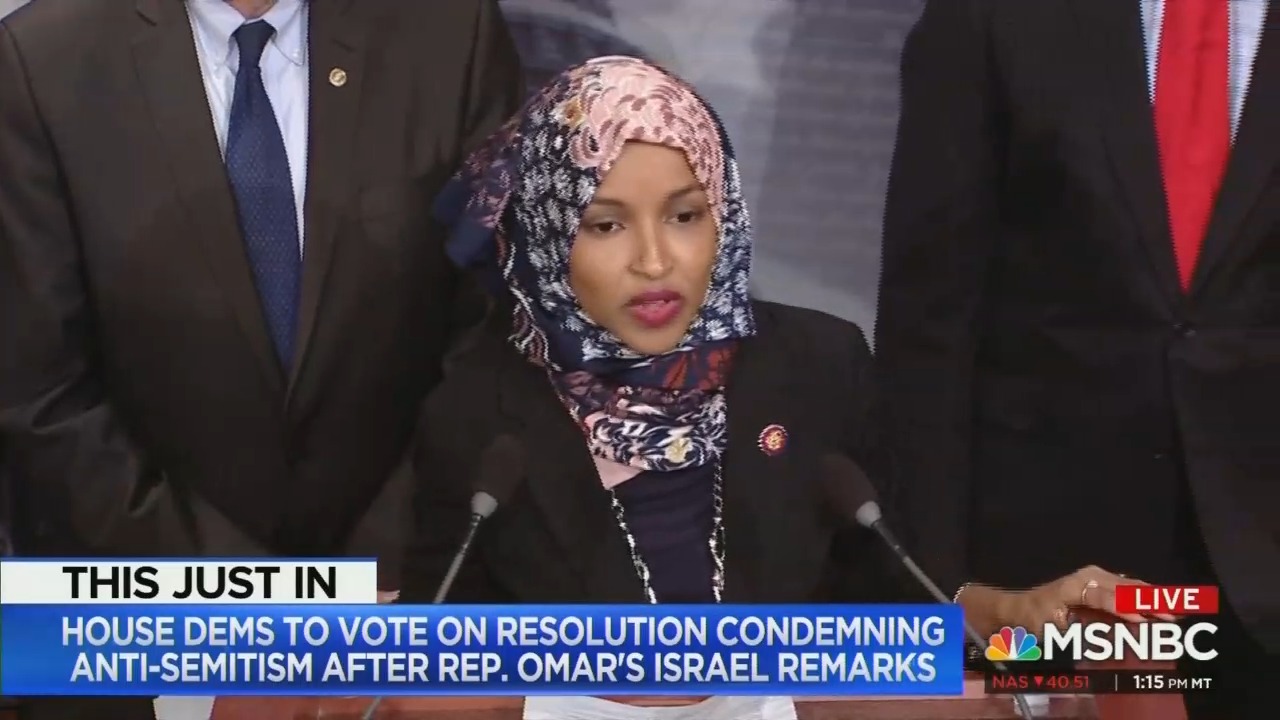 New York Times reporters Glenn Thrush and Sheryl Gay Stolberg kept up with the ongoing (and for Democrats, seemingly never-ending) saga over the constant spew of anti-Semitic statements emanating from controversial new Democratic Rep. Ilhan Omar. The suspiciously regretful-sounding “Democrats Let Their Message Escape Them” appeared on the front of Thursday’s edition.

Indeed, the reporters appeared to lament the controversy less for Rep. Omar’s actual anti-Semitic statements than for distracting Democrats from liberal legislation.

Representative Hakeem Jeffries, an unflappable Brooklynite tasked with keeping the fractious House Democratic caucus on message, wanted to spend Wednesday talking up the party’s all-in-one voting rights and ethics reform bill making its way to a vote this week.

Instead Mr. Jeffries, a top lieutenant of Speaker Nancy Pelosi’s, stood uncomfortably in front of a specially printed “For the People” placard, sideswiped by a single anti-Israel comment from a freshman representative from Minnesota, Ilhan Omar -- and peppered by reporters’ questions about how Ms. Pelosi planned to punish the newcomer without provoking a civil war.

So it has gone for Ms. Pelosi and her leadership team, which is showing some rust after eight years in the minority. The first gun control bills in 25 years cleared the House last month with little notice, swallowed whole by the House Oversight and Reform Committee’s hearing with President Trump’s former lawyer and fixer, Michael D. Cohen.

There was some more “Republicans seized” action.

Most of his time was spent trying to address the conflagration around Ms. Omar. Republicans, seeking to move past their own internal fight over Mr. Trump’s declaration of a national emergency at the border with Mexico, seized on the fight.

“It is shameful that House Democrats won’t take a stronger stand against anti-Semitism in their conference,” Mr. Trump wrote in a tweet Wednesday afternoon. “Anti-Semitism has fueled atrocities throughout history and it’s inconceivable they will not act to condemn it!”

To Democrats, that was galling. Mr. Trump has been accused repeatedly of trafficking in anti-Semitic tropes. His 2016 campaign tweeted out an image of Hillary Clinton in front of a Jewish star, over a pile of money. His final campaign ad railed against “global special interests” as the faces of the billionaire philanthropist George Soros, Lloyd Blankfein of Goldman Sachs and the Federal Reserve chairwoman Janet L. Yellen -- all Jewish -- crossed the screen. In 2015, Mr. Trump told members of the Republican Jewish Coalition: “You’re not going to support me because I don’t want your money. You want to control your politicians, that’s fine.”

A story posted Wednesday by Stolberg and Thrush that didn’t make it into print, “Democrats Put Off Anti-Semitism Resolution After Fierce Backlash,” sported tougher anti-Republican language, in classic “whataboutism” fashion. Reviled in 2018 as the last refuge of scoundrels, it is now acceptable again among liberals to point fingers at the other party when it does similar things.

Earlier in the day, Democrats, including some prominent African-Americans, confronted Speaker Nancy Pelosi at a testy closed-door meeting, demanding to know why they were being pushed to pass the resolution when bigoted comments by Republicans have gone unchallenged....But that was not enough for many lawmakers, especially African-Americans who see Ms. Omar getting singled out as a woman of color, while Democratic leaders have let slide other racist and bigoted remarks -- including those of President Trump.

Stolberg initially set up this sympathy for Rep. Omar on Wednesday’s front page, “Rift Over Israel Has Democrats Divided by Age -- House Debates a Vote on Anti-Semitism.”

A formal condemnation of anti-Semitism that is up for a vote in the House this week has touched off a furious debate between older House Democrats and their young liberal colleagues over whether Representative Ilhan Omar is being singled out for unfair treatment over her statements on Israel.

And it took years for Republican leaders to take action against Representative Steve King, Republican of Iowa, despite a long history of racist and bigoted comments. He was removed from his committee assignments this year after questioning when “white supremacy” had become an offensive term.

It's an odd argument, given that Stolberg herself previously bragged about the Democrats being so tough on themselves. Yet now, when the party is obviously avoiding confronting anti-Semitism in their ranks, she obligingly helps the Democrats change the subject.