New York Times reporter Jaclyn Peiser paid tribute to BuzzFeed on Friday in the wake of layoffs at the site infamous for quizzes and lists: “It’s Hardly the Stuff of a Playful BuzzFeed Quiz.”

It’s at least the second sympathetic Times story about the listicle specialists since they announced mass layoffs -- and again there was no reference to the meltdown on the “news” side of BuzzFeed, over the alleged scoop co-authored by disgraced journalist Jason Leopold, claiming that former Trump lawyer Michael Cohen had been directed by Trump to lie to Congress.

But what made the article noteworthy were the final paragraphs, when Peiser tried to make the right wing the bad actor, by painting as sinister some mocking "advice" given to laid-off journalists on Twitter.

Over the last week, many of the laid-off BuzzFeeders found themselves the recipients of ugly messages and tweets sent by trolls and alt-right Twitter accounts. The messages included some variation of “learn to code,” images of nooses and insults. One message sent by email included death threats, NBC News reported.

“I believe there is a special, dedicated section of Hell just for people with anime twitter avatars who tell laid-off journalists to ‘learn to code,’” Patrick George, the editor in chief of the automotive site Jalopnik, said on Twitter. 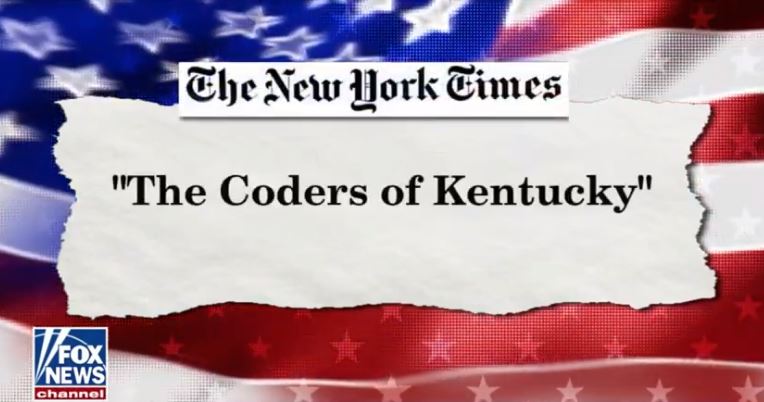 But how about when the New York Times sends that same “learn to code” message to laid-off coal miners? Victims in part of Obama-era environmental regulations, those mining jobs are routinely dismissed as long gone by journalists, and the out-of-work miners are often pointed toward the technology sector by the Brooklyn-based go-getters who write for outlets like the Times. In other words, the coal miners are told to “learn to code” by journalists who aren't overly concerned about regulation’s effect on jobs in coal country.

Mr. Harrison, 36, is one of 10 former mine workers employed at BitSource, an internet start-up founded by two Pikeville businessmen determined to prove a point: that with training and encouragement, Kentucky miners can learn to code.

“We told them, ‘Quit thinking of yourselves as unemployed coal workers; you’re technology workers,’” said Rusty Justice, a founder of BitSource. He called his pep talks “reimagination training.”

The article spoke of a “just transition” from coal to coding.

Less condescending but in the same vein was a Times op-ed by Arlie Hochschild in September 2018, “The Coders of Kentucky -- A bipartisan effort to revitalize the heartland, one tech job at a time.”

Certainly the liberal press had no problem when Obama urged every kid to learn to code. It was seen as cool and cutting edge.