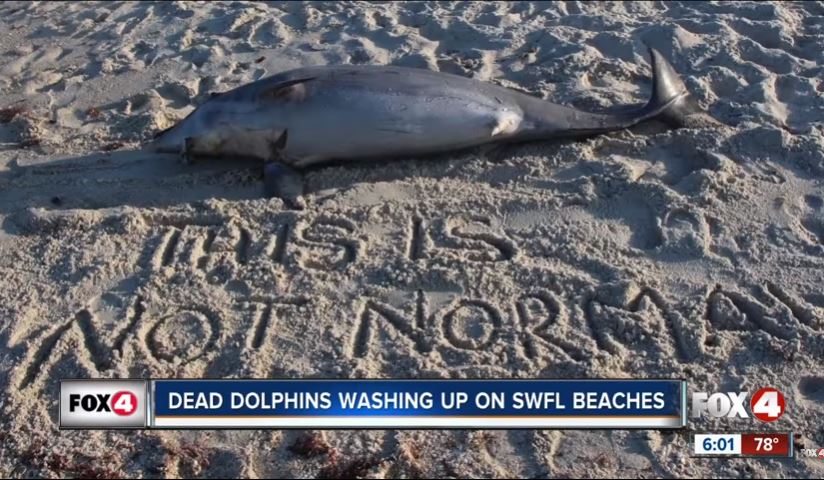 New York Times media reporter Jim Rutenberg branches off into global warming alarmism (while still mocking conservatives) on the front of Monday's Business Day with an oddity about a freelance environmentalist going viral with emotional videos of dead dolphins on the beach in Naples, Fla. that she blames on global warming: “Filling a TV News Gap With Just an iPhone.” The online headline: “News Networks Fall Short on Climate Story as Dolphins Die on the Beach.” Note how the Times steals a base, equating climate to the dead dolphins as if there is a clear, proven linkage (there isn’t).

Red tide has killed wildlife along the Gulf Coast for centuries. But the latest bloom has been unusually persistent. It arrived over a year ago, and its effects have been extreme.

[Colleen] Gill and others here argued that human activity had contributed to the stubborn bloom. She joined the debate on Facebook, making the case that the combined effects of sugar plantations, fertilizer runoff and warming seas were sustaining the microscopic Karenia brevis algae species and making it more lethal.

Many scientists agree with that assessment, arguing that human-based nutrients and climate change are at least exacerbating the red tide and other algae blooms.

But Florida is run by a governor, Rick Scott, whose environmental officials had discouraged the use of the phrase “climate change.” And this part of the state is Trump country, not to mention a vacation enclave for conservative media stars like Sean Hannity and Neal Boortz, who doubt the scientific consensus on the human contributions to climate change.

Gill is hardly a naif, disconnected from the major media elite.

Irked by the debate and concerned that the news media wasn’t doing enough to cover what she was seeing on the beach, Ms. Gill, whose father was a producer for CBS News, started shooting videos with her iPhone during her morning walks.

One of Gill's images of a dead dolphin used in the paper included this bit of editorializing written in the sand by Gill: "This Is Not Normal."

On Nov. 26, one of her videos went so viral that it drew the notice of The Naples Daily News and local news stations.

In the video, Ms. Gill zoomed in on a six-foot-long, stiff, glistening dolphin carcass, its mouth frozen into a toothy smile. The creature was one of more than 20 dead bottlenose dolphins that had washed up on local beaches in recent days.

“This is the seventh one in 24 hours,” Ms. Gill said through tears in the video. “When is this going to stop?”

At roughly the same time, in Washington, President Trump told reporters outside the White House that he had doubts about the climate change report his administration had released the day after Thanksgiving.

The administration had made the report public without any effort to soften its conclusions, as the administration of George W. Bush had done with similar reports. Under President Trump, it seemed no longer necessary to spin the particulars, Coral Davenport reported for The New York Times. The administration had hit upon a new tactic that drew from lessons that Mr. Trump had learned on the campaign trail: All you have to do these days to combat facts is to declare them false. Disdain is stronger than spin.

As Steven J. Milloy, a skeptic of human-caused climate change and a member of the Trump transition team, said, there had been no need “to stop the deep state” from releasing the report when “this is made-up hysteria, anyway.”

Milloy was also an adjunct scholar at the Cato Institute and Competitive Enterprise Institute, but never mind that.

Thankfully, cable news came to the rescue by making sure that those who commented on air about a report produced by scientists across 13 federal agencies were trained experts.

No, wait. That’s not what happened.

On CNN, the former senator Rick Santorum disputed the findings with a canard: “A lot of these scientists are driven by the money that they receive,” he said. The network later came under fire when “AC360” had Mr. Santorum on again but canceled a planned interview with an author of the government report, the atmospheric scientist Katharine Hayhoe of Texas Tech University.

Rutenberg’s “depressing Florida journey” took him to a University of Miami professor who advocated the censoring of dissenting voices on global warming.

He suggested that television news bookers change their approach if they want to accurately reflect the debate.

Squelching climate dissenters is in line with Rutenberg’s odd idea of quasi-suppression of conservative political books like those from Ann Coulter: “Maybe it’s time to stop labeling her book ‘nonfiction.’”

The oft-repeated “97 percent” figure is also dubious and misleading.

Even when he is obliged to note that there’s no proven link between the dead dolphins and “climate change,” Rutenberg has to be snide about it.

Veterinarians at the von Arx Wildlife Hospital of the Conservancy of Southwest Florida were deluged. The director, Joanna Fitzgerald, told me they weren’t ready to blame red tide. Working in the reality business, they were awaiting lab results....