NYT: GA Dem Ready for Her Closeup: 'Say You Were Making a TV Movie About Stacey Abrams'

The New York Times has truly taken sides in the upcoming Georgia governor’s race pitting Republican Brian Kemp versus (from the online headline deck): “Stacey Abrams, a Daughter of the South, Asks Georgia to Change -- In an election steeped in issues of race, voting rights and the South’s past, present and future, Ms. Abrams is trying to become the first black woman elected governor of any state.”

Even conceding Abrams’ appeal and charisma, it’s a huge and hugely flattering front-page profile of the Democratic candidate for governor.

The wishful thinking was strong in the print headline to Sarah Lyall and Richard Fausset’s report, “For a Daughter of the South, a Closed Door Could Swing Open.”

The Times literally gave Abrams a Hollywood makeover in the lead: 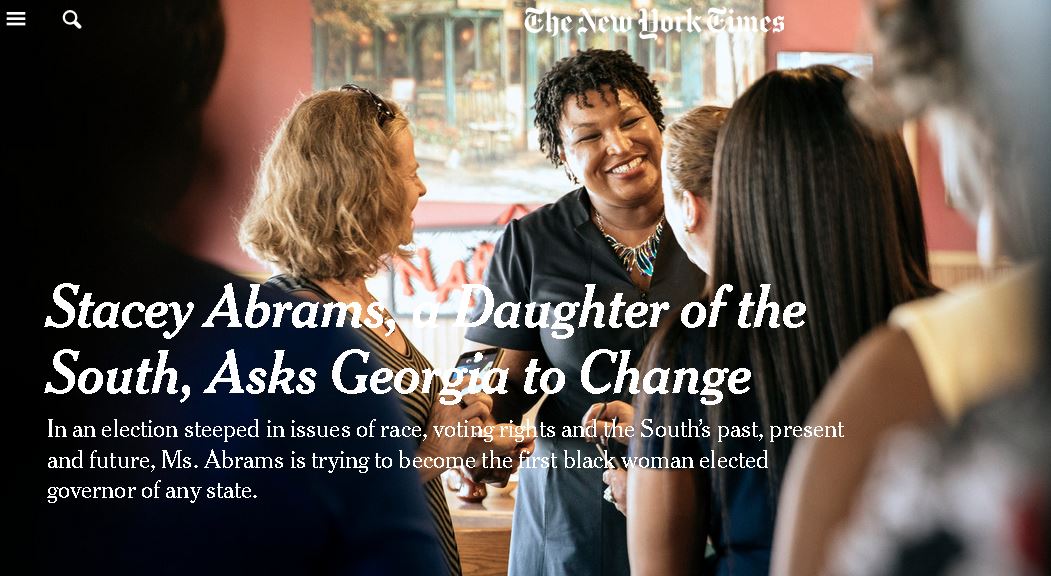 Let’s say you were making a TV movie about Stacey Abrams, the Democratic candidate for governor in the reliably Republican state of Georgia. Where would you begin?

Ms. Abrams, 44, has spent much of her life pushing through doors that other people wanted to keep shut, and if she wins in November she will become the first black woman elected governor of any state. So you could begin with her first attempt to gain entry to the Georgia governor’s mansion.

They let Abrams relay a flattering anecdote from 27 years ago about convincing a guard to let her into Georgia’s annual valedictorians’ reception at the home of Gov. Zell Miller, which ended:

“I don’t remember meeting the governor of Georgia or my fellow valedictorians,” she added. “All I remember that day was a man at a gate, telling me I don’t belong.”

The Times spun Abrams as a moderate throughout the huge profile.

Ms. Abrams is an outsider who came to conclude that the system was best challenged from within. Toward the end of her freshman year at Spelman College in Atlanta, she led a protest against the Rodney King verdict, co-founded a group called Students for African American Empowerment, and helped burn the state flag -- then dominated by the Confederate battle flag image and hated by Georgia’s black population -- on the steps of the state Capitol.

But while some of Ms. Abrams’s more revolutionary-minded peers would go on to argue that the only way to upend the status quo was to wipe it away and start over, Ms. Abrams would leave the group she helped found and throw herself into the messy deal-making of the democratic process.

Though polls show Ms. Abrams and Mr. Kemp in a very tight race, she has some odds to beat, and not just the odds of being a black female Democrat running for statewide office. In 2016, President Trump won 51 percent of the Georgia vote to Hillary Clinton’s 45.9 percent. Mr. Kemp, who has been accused of overseeing voter suppression as secretary of state, is running a Trumpian campaign full of conservative appeals on issues like immigration and tax cuts that animate the president’s base.

The Times carefully modulated her moderate image, just as Abrams is trying to do on the campaign trail, while portraying Abrams as an earnest grind.

She radiated ambition. By her own admission, she was not much of a glad-hander, preferring to read reports and pore over tax bills -- she was known for her pointillistic understanding of the tax code -- than schmooze with colleagues and lobbyists.

They spared a few deep paragraphs for less-flattering details.

More recently, Mr. Kemp and his allies have painted her as an extremist on issues like immigration. Ms. Abrams favors extending the Hope Scholarship program to undocumented students, and said this month that the coming “blue wave” would include undocumented immigrants. What she meant, she said later, was that “anyone running for governor should believe in all of Georgia.” But it was a misstep that Mr. Kemp pounced on.

“It means she wants illegals to vote in Georgia,” he said on Fox News.

Last spring, Ms. Abrams published an article in Fortune magazine titled, “My $200,000 Debt Should Not Disqualify Me for Governor of Georgia.”

They touched on her heavy personal debt. But Lyall and Fausset opened and closed the storybook tale with the same silly "TV movie" reference.

A TV movie about the life of Stacey Abrams could also start in a crowded room in Dalton, Ga., where more than 100 people have come to hear her speak.

It is August. An elderly white woman rises, and says she has heard that Ms. Abrams wants to remove the “beautiful” Confederate carvings at Stone Mountain. “Can you answer me why?” she says.

Then they stand back and marvel as Abrams “launches into a passionate but lawyerly narrative” about white supremacy. Note how the reporters carefully and consistently position Abrams as a brainy, not-too-liberal Democrat.

While Lyall and Fausset made Abrams a moderate, Fausset in July had no problems referring to Georgia’s Republican voters as “far right.”