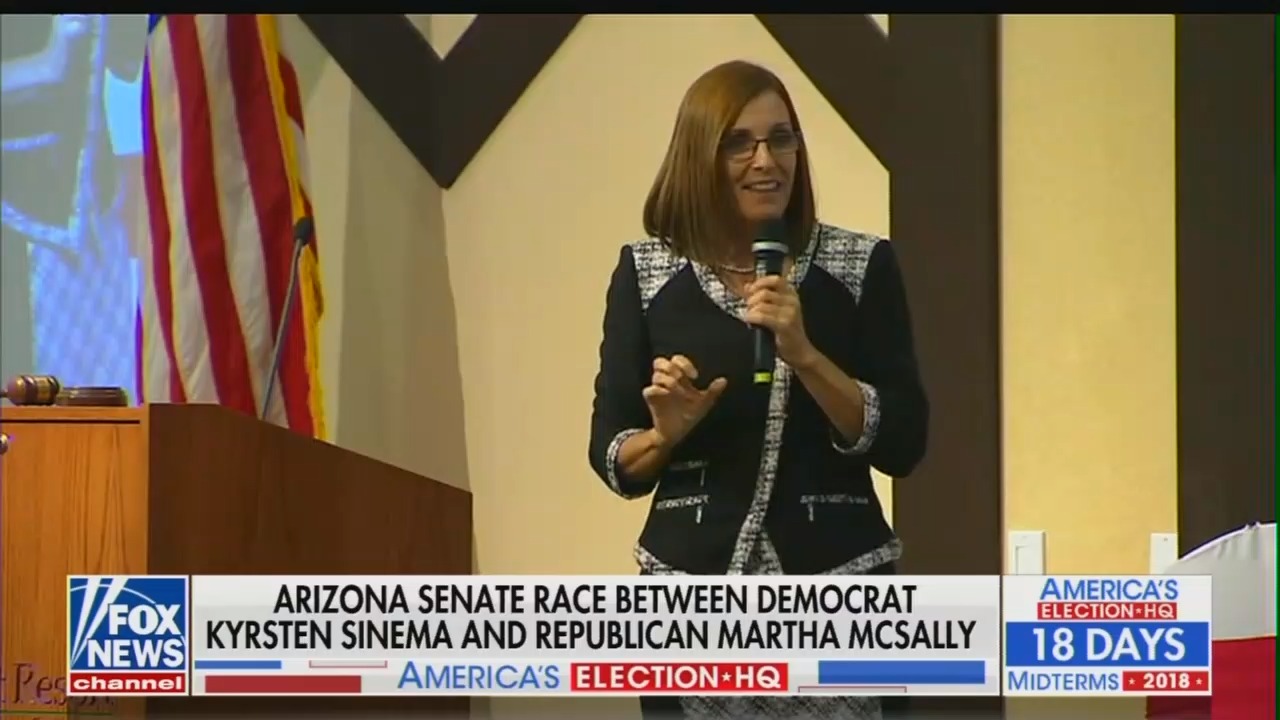 Martha McSally was speaking to a veterans group on Thursday about aggressive liberal politics when she suddenly shifted the conversation to Kyrsten Sinema, her Democratic opponent in the race for an open Senate seat here. “Speaking of treason,” she said, referring to Ms. Sinema, “her extreme views are out of step.”

It was a slightly awkward rejoinder. But it also appears to be Ms. McSally’s closing argument.

Ms. McSally, a Republican congresswoman, is employing an unusual tactic in the final stages of one of the most closely watched Senate races in the country, doubling down on a jarring claim she made in a debate this week: that Ms. Sinema’s response years ago to a radio host’s flip comment about joining the Taliban constituted a crime against the state.

Until two weeks ago, Ms. McSally seemed to be losing ground in her battle with Ms. Sinema, a Democratic House member from Phoenix, for the seat being vacated by the retiring Republican, Jeff Flake.

After calling Kelli Ward, whom McSally beat in the Repubican primary “an ultraconservative osteopath,” Steinhauer went on:

In recent days, Ms. McSally appears to have gained some footing by delving into Ms. Sinema’s past. Ms. McSally’s supporters surfaced an old photo of Ms. Sinema protesting the war in Iraq as a law student in 2002, and a video of her mocking her home state for being a “meth lab of democracy” while serving in the state legislature. They also amplified a report of a 2003 radio interview of Ms. Sinema expressing indifference -- “I don’t care,” she said -- to a radio host’s provocation about hypothetically joining the Taliban.

McSally’s impressive history is shunted into a brief mention -- one could easily imagine the Times devoting a full story to a Democratic former fighter pilot.

Ms. McSally, a former United States Air Force fighter pilot, seized upon the Taliban comment and charged in their debate this week that Ms. Sinema’s stance amounted to “treason,” a broadside so sharp it became national news.

Also note above that one of the liberal media’s favorite words appeared -- “seized,” which is almost as good as “pounced” -- two verbs employed by the media used almost solely when a Republican is pressing an issue to advantage against Democrats, and hardly ever the other way around.

Ms. Sinema has largely not taken the bait.

Ms. Sinema and Ms. McSally, who both represent swing districts, have done their own transforming. Ms. Sinema went from a fairly left-leaning partisan member of the state legislature to one of the most centrist Democrats in the House.

Ms. McSally’s ads and those of her supporters have been relentlessly negative and darkly accusative, which is a great primary play, but may hurt her with general election voters. “There are not enough voters for her to mobilize with that to win,” said Kim Fridkin, a political-science professor at Arizona State University.

There are plenty of other nasty anecdotes from Sinema’s left-wing activist past that Steinhauer skipped.

Oddly enough, the paper actually covered Sinema’s ideological about-face in a front-page story last month, raising skepticism at her right-ward turn. But when her Republican opponent does the same thing weeks before the election, the Times takes Sinema’s side against the Republican.