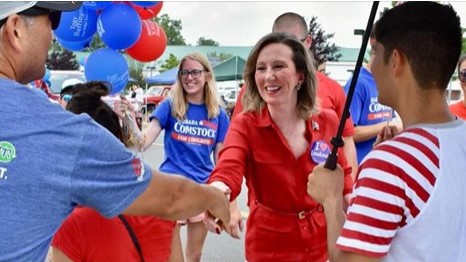 In case you had any doubts, the New York Times really, really wants Democrats to take control of the House and Senate in November.

On Wednesday, the paper’s target was Rep. Barbara Comstock of Virginia. Michael Tackett’s fair-enough story nevertheless put Comstock in the national spotlight as a vulnerable Republican: “In Diverse Virginia District, Ties to Trump Test a Dutiful Incumbent.” The online headline was harsher: “This Republican Always Shows Up. That May Not Be Enough This Fall.”

Tuesday’s lead National section story by Jack Healy in Colorado was headed: “A Diverse District Where Republicans Hold a Grip.” The online headline was even more whining and partisan: “If Demographics Are Destiny, Why Can’t Democrats Win This Denver District?” It would surely please the paper if the Democrats did.

When the paper isn't hinting that individual Republicans should be run out of Democratic areas, they're celebrating any sign of Democratic strength, no matter how indirect and presumptous. A story on Sunday ironically rejoiced at the win of a white woman instead of a minority Cuban-American in the Democratic primary for a district that includes the Cuban exile community “Little Havana" interpreting the win broadly to mean conservative anti-Communism is weaking its hold: “If La Gringa Can Win In Miami, What Wall?”

The pattern goes back to the beginning of the election cycle. All of these are headlines from news stories, non-opinion pieces:

A May 15 analysis by Maggie Astor and Trip Gabriel: “In Remapped Districts, Pennsylvania Democrats Plot Their Resurgence – A Gain of 3 to 6 House Seats Is Expected."

Thomas Kaplan wrote on the front page May 3: “G.O.P. Obamacare Repeal Vote Becomes a Democratic Weapon.” The text box had wishful thinking for the Democrats: “A political triumph for Republicans that may amount to a political gift to Democrats.”

The lead National section story on April 27: “Wave of Red Surges Into Arizona and Colorado – Tired of Cuts, Teachers Demand Higher Pay; Walkouts Shutdown Hundreds of Schools.” By “red” the paper was referring to the teachers' red-shirt uniforms, certainly not “red” as in Republican support.

A front-page story on April 19 by Jonathan Martin: “Farmers’ Anger at Trump Tariffs Puts G.O.P. at Risk in Midterms.”

A huge graphic on the front of the National section by Jasmine Lee on March 27: “Democrats Need to Flip 24 G.O.P. Seats To Reclaim the House. 25 Are in Clinton Territory.”

Whether the paper’s Democratic wishes come true or not in November, the paper’s intent is clear: Puff and prod the Democrats over the finish line.