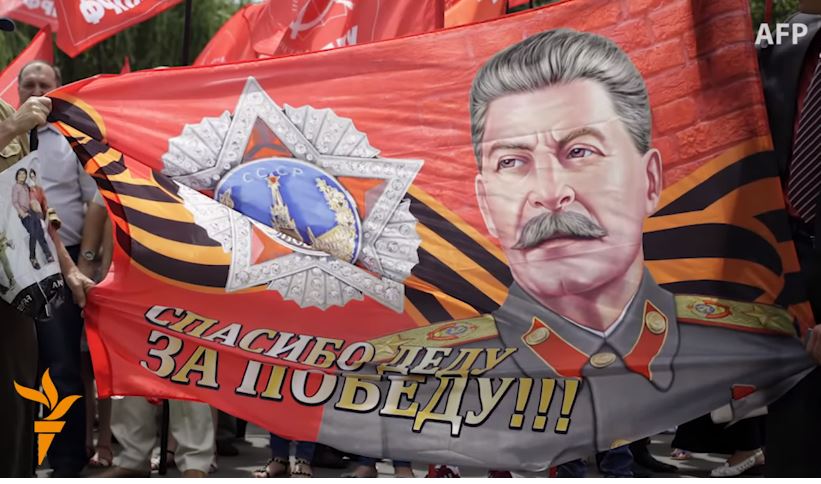 New York Times reporter Sarah Lyall offered a disturbing look at the World Cup host city of Volgograd, Russia, where some from the Communist era actually have found World War II-related memories of one of the world’s cruelest dictators, Joseph Stalin: “In Volgograd, Stalin Still Stalks the Sideline.”

It’s a two-page print edition spread filled with photos by Maxim Babenko from the local Stalin museum featuring busts of Stalin and other regalia, which is rather odd in itself -- the paper doesn’t often run photos of Nazi paraphernalia. And the most important part of a story on Stalin is nearly absent: Why he is such a controversial figure in the first place. Whitewashing the crimes of Soviet Communism is a shameful habit at the Times, whose notorious "Red Century" series did the same to mark the 100th anniversary of the Russian Revolution.

Joseph Stalin himself vanished from the city in 1961, when his name was erased from Soviet history books and, with the stroke of a pen, Stalingrad became Volgograd. But he lives in its soul.

Yet Lyall never circles back around to ask why. Stalin’s arbitrary reign of terror -- the millions annihilated by persecution, starvation, or in the gulags -- merited only a single brief acknowledgment in paragraph 16 of 27. The only other negative word applied to Stalin is “dictator” in the story subhead, which Lyall likely didn’t write.

Here he is in the Stalingrad Hotel, his portrait in the café, beside a TV on which Portugal is playing Morocco in the World Cup. Here he is in the gift shop, his face plastered on the souvenirs: Stalin flasks, Stalin playing cards, Stalin wall clocks, Stalin key chains, Stalin lighters, Stalin T-shirts, Stalin mugs and Stalin commemorative plates....

And here he is, too, in the office of Irina Rubaeva, 67, a historian and tour guide and the proprietor of Volgograd’s Stalin Museum.

Ms. Rubaeva has a jolly “Uncle Joe” Stalin figurine on her desk and a more imperious Stalin bust against the wall. She says she likes having him around. More than that, she believes it is time to restore his name to the city whose history all but belongs to him.

Part of it has to do with World War II, she said, and how hard it is to disentangle Stalin from the horrific, heroic events associated with a place that bore his name and that he refused to surrender to Hitler. The Battle of Stalingrad, which left some two million people dead, is considered one of the bloodiest battles in the history of warfare, and it marked a turning point in the Allied effort against the Nazis.

But another part of it, Ms. Rubaeva went on, has to do with the man himself.

“Stalin is to be praised for his political and economic achievements,” she said. “We are nearing a time when people want to know more about him and his personality.”

Lyall finally snuck in an “oh by the way” manner why Stalin might be controversial in paragraph 16 of the 27-paragraph story.

The question of how to address the legacy of a man who, among other things, was responsible for the deaths of millions of his own people, has flared up in other parts of the former Soviet Union, too.

Again, the counter-argument in favor of recognizing Stalin got far more column inches.

“They still consider Stalin a liberator there, and it is right that there should be a monument to him,” said Tamara Golovacheva, the secretary of Volgograd’s local Communist Party....

Lyall was far more critical of a political figure in a modern-day democracy -- British conservative Boris Johnson -- whom she twice branded a “liar” in a 2016 Times front-page story.