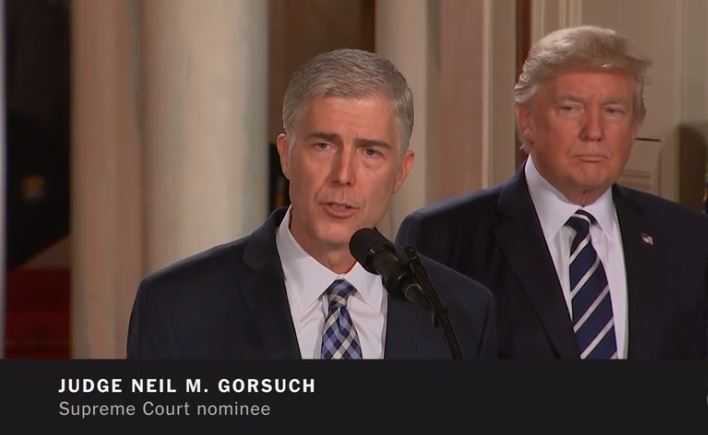 As two major Supreme Court decisions, on the travel ban and an abortion/free-speech question, were settled with 5-4 majorities, the New York Times devoted a front-page story Wednesday to Trump’s selection of Supreme Court pick Neil Gorsuch, while anguishing over the Republican decision not to give then-President Obama’s nominee Merrick Garland a hearing in 2016.

In the label-heavy “G.O.P. Tactics in 2016 Pay Off in Gorsuch, Who Proves Decisive Figure on Court," reporters Elizabeth Dias and Sydney Ember decry the travel ban ruling in particular as perhaps defying American values, while forwarding extremist cries of stolen Supreme Court seats.

The consequences of President Trump’s nomination of Neil M. Gorsuch to the Supreme Court -- and the Republican blockade of President Barack Obama’s nomination of Merrick B. Garland in 2016 for that seat -- became powerfully clear on Tuesday after the court’s conservative majority handed down major decisions to uphold Mr. Trump’s travel ban and in favor of abortion rights opponents.

Social conservatives cheered the court’s ruling that a California law requiring “crisis pregnancy centers” to provide abortion information likely violates the First Amendment. Some conservatives also viewed the ruling -- their latest win to advance their anti-abortion cause since Mr. Trump has taken office -- as another opportunity to energize their base ahead of the November elections.

The travel ban decision drew more conflicting reactions from conservative voters and religious groups, with some criticizing it as anti-immigrant. Several groups supporting immigrants deemed the travel ban decision “shameful” and “hateful.” And many Democratic leaders denounced both rulings.

Check the picky labeling: Garland can't simply be a "liberal," but is merely "relatively progressive." Scalia of course, is a plain old "conservative."

For liberal voters, the decisions underscored their worst fears about the Republican tactics in 2016 to block Judge Garland, a relatively progressive nominee, following the death of Justice Antonin Scalia, a conservative. The Republican majority in the Senate refused to convene a hearing or a vote on Judge Garland’s nomination, insisting that the next president should fill the seat -- a controversial move that some legal scholars called unprecedented....

As she did in a June 14 story, Edmondson cited the paper’s favorite Muslim pressure group, the controversial Council on American-Islamic Relations, or CAIR, whose ties to Hamas have been documented in federal court and by Democratic Sen. Charles Schumer:

The story concluded with a dump of leftist anti-Trump extremism.

“He’s like the dictators he attacks but says he admires,” said Sam Sassourian, a 72-year-old retired engineer who emigrated from Iran in the 1980s. “We love this country, but it is becoming more like the one we escaped from. This is not right and yet nobody can stop it.”

“This decision was nothing more than a racist decision,” said Letitia James, the New York City public advocate. “This is not who we are! This was a result of the fact that they stole the Supreme Court seat!”