Yet another long New York Times article on the humanitarian crisis in Venezuela spared no space for the “S-word,” -- socialism -- that is the root cause of the country’s woes. William Neuman and Clifford Krauss devoted 1,700 words on the front of Friday’s edition to one facet of the country’s woes: "Job at Oil Giant Is No Longer Path to the Venezuelan Dream.”

The absence of the actual cause of Venezuela’s human tragedy – authoritarian socialism – is par for the course for the paper, as demonstrated on Newsbusters again and again. 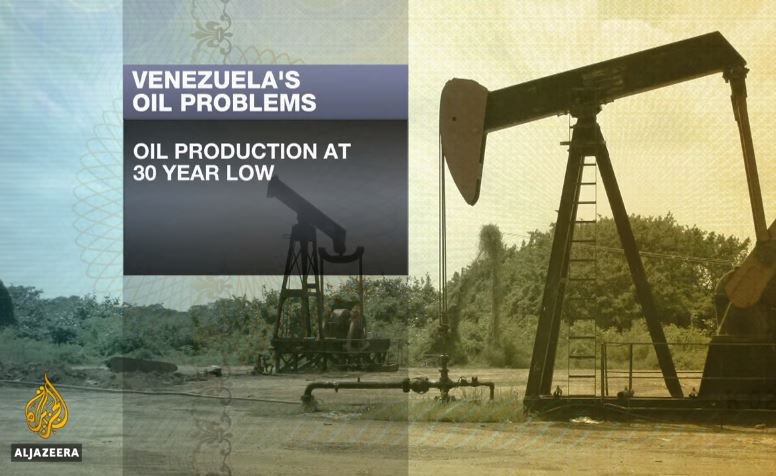 Thousands of workers are fleeing Venezuela’s state-owned oil company, abandoning once-coveted jobs made worthless by the worst inflation in the world. And now the hemorrhaging is threatening the nation’s chances of overcoming its long economic collapse.

Desperate oil workers and criminals are also stripping the oil company of vital equipment, vehicles, pumps and copper wiring, carrying off whatever they can to make money. The double drain -- of people and hardware -- is further crippling a company that has been teetering for years yet remains the country’s most important source of income.

The timing could not be worse for Venezuela’s increasingly authoritarian president, Nicolás Maduro, who was re-elected last month in a vote that has been widely condemned by leaders across the hemisphere. Prominent opposition politicians were either barred from competing in the election, imprisoned or in exile.

Neuman and Krauss dealt with the proximate cause, while skipping the underlying one:

But while Mr. Maduro has firm control over the country, Venezuela is on its knees economically, buckled by hyperinflation and a history of mismanagement. Widespread hunger, political strife, devastating shortages of medicine and an exodus of well over a million people in recent years have turned this country, once the economic envy of many of its neighbors, into a crisis that is spilling over international borders.

Again, they fail to explain just why Venezuela has fallen so far, so fast, speaking vaguely of “economic cataclysm.”

On a recent evening, with the sun slanting low over the plains, Mr. Navas prepared to leave. He was boarding a bus to the malaria-infested gold mines to the east, where he hoped to scrape out enough money to buy food for his family and, eventually, finance an even longer journey: to Ecuador or Peru, where he would follow a stampede of his fellow Venezuelans fleeing the country’s economic cataclysm.

Inflation in Venezuela is projected to reach an astounding 13,000 percent this year, according to the International Monetary Fund. When The New York Times interviewed Mr. Navas in May, the monthly salary for a worker like him was barely enough to buy a whole chicken or two pounds of beef. But with prices going up so quickly, it buys even less now.

The reporters sidled up to the underlying issue but still refused to spell out “socialism” as the ideology that wrecked a once-thriving oil-based economy.

Venezuela’s oil exports are being interrupted by legal action as well. In recent weeks, courts have ruled that ConocoPhillips, an American oil company, could seize Venezuelan shipments at refineries and export terminals in several Dutch Caribbean islands. The action stemmed from Venezuela’s decision to nationalize foreign oil assets a decade ago.

And at home, Venezuela has had so many troubles with refineries and other oil installations that it has had to import gasoline for the domestic market, spending dollars it can hardly afford.

Oil executives cite the difficulty of working in Venezuela as social conditions decline.

But why are they starving? The Times resolutely reuses to say.