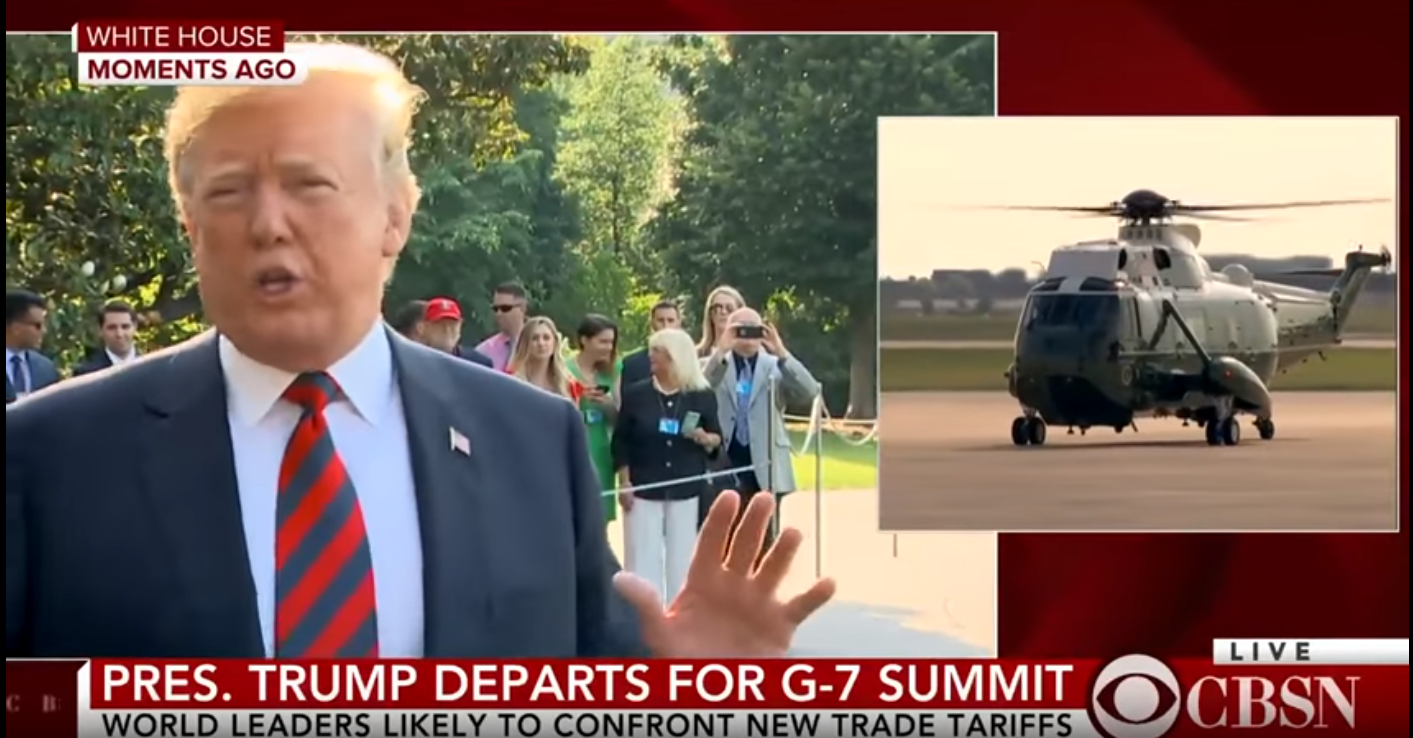 In Friday’s lead New York Times story on the Group of 7 meeting of industrialized nations in Canada which opened today, reporter Michael Shear set the table with sour grapes for Trump and sympathy for Europe’s more conventionally liberal leadership: “Anger Flares Up As The Group of 7 Heads to Quebec.”

President Trump will skip most of the second day of a summit meeting with allies this weekend, the White House said late Thursday, as he engaged in a contentious war of words over trade on the eve of a gathering that will underscore his isolation from the leaders of the world’s largest economies.

Mr. Trump was scheduled to arrive Friday morning at the meeting for a gathering that traditionally includes a moment of global camaraderie -- the “family photo” that captures presidents and prime ministers smiling for the camera.

This year, there will not be many grins.

Mr. Trump is the black sheep of this family, the estranged sibling who decided to pick fights with his relatives just before arriving to dinner. The dispute, Larry Kudlow, the president’s top economic adviser, acknowledges, is “much like a family quarrel,” but with the potential for vast diplomatic and economic consequences for the world.

The anger of American allies, over Mr. Trump’s decision to impose tariffs, is palpable.

Before the summit meeting, finance ministers from the other six countries that form the Group of 7, or G-7, condemned Mr. Trump’s trade decisions in an extraordinary rebuke of a member nation’s president. And some of the leaders themselves have threatened to boycott the usual end-of-meeting communiqué. A senior Canadian official said a statement by only Mr. Trudeau, the gathering’s host, is possible.

But rarely -- if ever -- has there been the kind of visceral and unanimous outrage at an American president among the United States’ most important allies, who for decades have seen the closest of relationships with the leader of the free world as a paramount foreign policy priority.

Shear reduced policy differences between left-wing Europe and America as Trump metaphorically sticking it to his counterparts.

Mr. Trump has repeatedly poked his counterparts in the eye -- ignoring their pleas to remain a part of the Paris climate treaty, the Trans-Pacific Partnership trade pact and the Iran nuclear deal, and more recently by branding their steel and aluminum industries threats to national security, and therefore subject to tariffs.

So when Mr. Trump disembarks Friday morning from Air Force One for a day and a half of closed-door meetings in the resort town of La Malbaie, the president can expect a subzero reception for what some observers have begun calling the “G6+1,” a reference to the political and diplomatic isolation that Mr. Trump has created for himself with his unilateral trade and security actions against his friends.

The ill will among the United States’ allies is a striking contrast to the praise Mr. Trump has heaped on North Korea, one of the country’s most enduring adversaries, before his historic meeting next week with Kim Jong-un, the country’s normally reclusive leader.

Speaking of diplomatic inconsistencies, the Times was fine with President Obama’s criticism of Israel and friendliness toward Iran.

Mr. Trump’s decision to abandon the Iran deal was particularly infuriating to leaders in Europe, where businesses and banks had been eager to begin commercial activities in Iran with the lifting of sanctions....

Clues to how the meetings in Canada have gone may be found in the body language of Mr. Trump and his counterparts as they pose for pictures before and after their sessions.

Mr. Kupchan said he will be looking for the expressions on the faces of the allies: “Merkel sitting next to Trump, having just talked about Iran, with a massive frown, looking the other way,” he said. “That’s my best bet.”

A follow-up story from Shear noted “friendly body language” and comity during group photos, with no mention of the previous predictions.