NYT Initially Buries Release of Prisoners, Touts It on Thursday 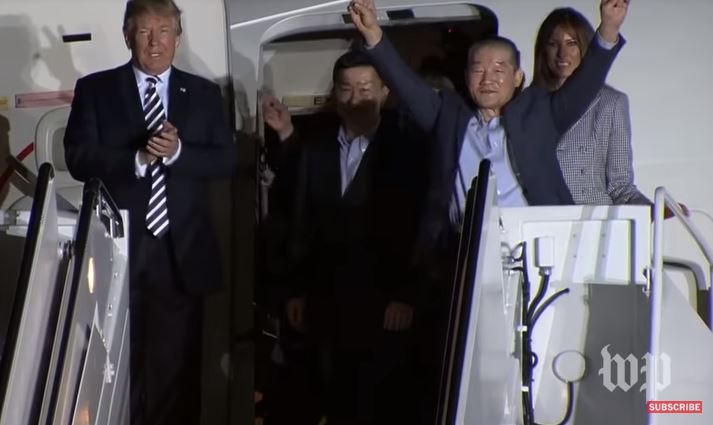 New York Times reporter Gardiner Harris apparently has no nose for news -- at least not for the kind that may make President Trump look like an effective leader. His Wednesday story, “On Big Day, Top Diplomat Is Halfway Around the World, Raising Questions,” buried the lead in truly embarrassing fashion while mocking the supposedly AWOL Secretary of State Mike Pompeo. The paper realized the mistake on Thursday.

Incredibly, the news of Mike Pompeo supervising the then-imminent release of three Americans being held in North Korea was relegated to paragraph 11 of a 17 graph story, in an “oh by the way” fashion. Yet it led the paper’s front page the next day!

When President Trump made the surprise announcement in March that he would soon meet with the North Korean leader, Kim Jong-un, Secretary of State Rex W. Tillerson was thousands of miles away, an absence interpreted as a sign of Mr. Tillerson’s irrelevance.

Mr. Trump soon replaced Mr. Tillerson with Mike Pompeo, who has promised to bring back the State Department’s “swagger” and import. But on Tuesday, when Mr. Trump made what could be the most significant diplomatic announcement of his presidency -- that he would exit the Iran nuclear agreement -- his chief diplomat was again thousands of miles away, this time on an unannounced visit to Pyongyang, the North’s capital, to lay further groundwork for a summit meeting between Mr. Kim and Mr. Trump.

The absence of Mr. Pompeo and other top State Department officials left perplexed European diplomats privately complaining that they were having trouble getting answers from Washington, and created an uncertainty about what was next that spanned the Atlantic Ocean.

Senior State Department officials were momentarily speechless on Tuesday when asked why Mr. Pompeo did not delay his trip by a day to be in Washington during Mr. Trump’s Iran deal announcement. Mr. Pompeo left for Pyongyang on Monday night.

The criticism of Pompeo would have been weak enough, even if Harris had no inkling that the hostage release was on the agenda – but Harris did know! He dropped it casually two-thirds into the story:

Also, according to a senior aide to South Korea’s president, Moon Jae-in, Mr. Pompeo was expected to leave Pyongyang with three Americans now imprisoned in North Korea and return to the United States with them. All of them are Korean-Americans and all have the surname Kim, although they are not related.

Oh, is that all? It led the paper the next day, but made paragraph 11 in a Page 10 story the day before.

President Trump tweeted about the paper’s embarrassing failure to see news right in front of it.

The Times had a vastly different and more appropriate take on the prisoner release when it actually happened, putting it in the lead story slot in Thursday’s edition, recognizing its potential deep effect on international relations, while retaining their trademark cynicism to all things Trump. Harris was listed as one of four contributing reporters to the story but didn’t get a byline, which was probably for the best.

The release of three American prisoners cleared away a last obstacle on Wednesday to a landmark nuclear summit meeting between President Trump and North Korea’s leader, Kim Jong-un.

North Korea freed the prisoners, all Americans of Korean descent, even as the two countries finalized details for a meeting between their leaders. The move was North Korea’s most tangible gesture aimed at improving relations with the United States since Mr. Trump took office.

Mr. Trump exulted over the release and publicly entertained talk that he could even win a Nobel Peace Prize for his diplomacy. He was so eager to associate himself with the freed prisoners that he decided to personally travel to Joint Base Andrews outside Washington in the middle of the night to welcome them back to the United States, something other presidents have not typically done in similar circumstances.