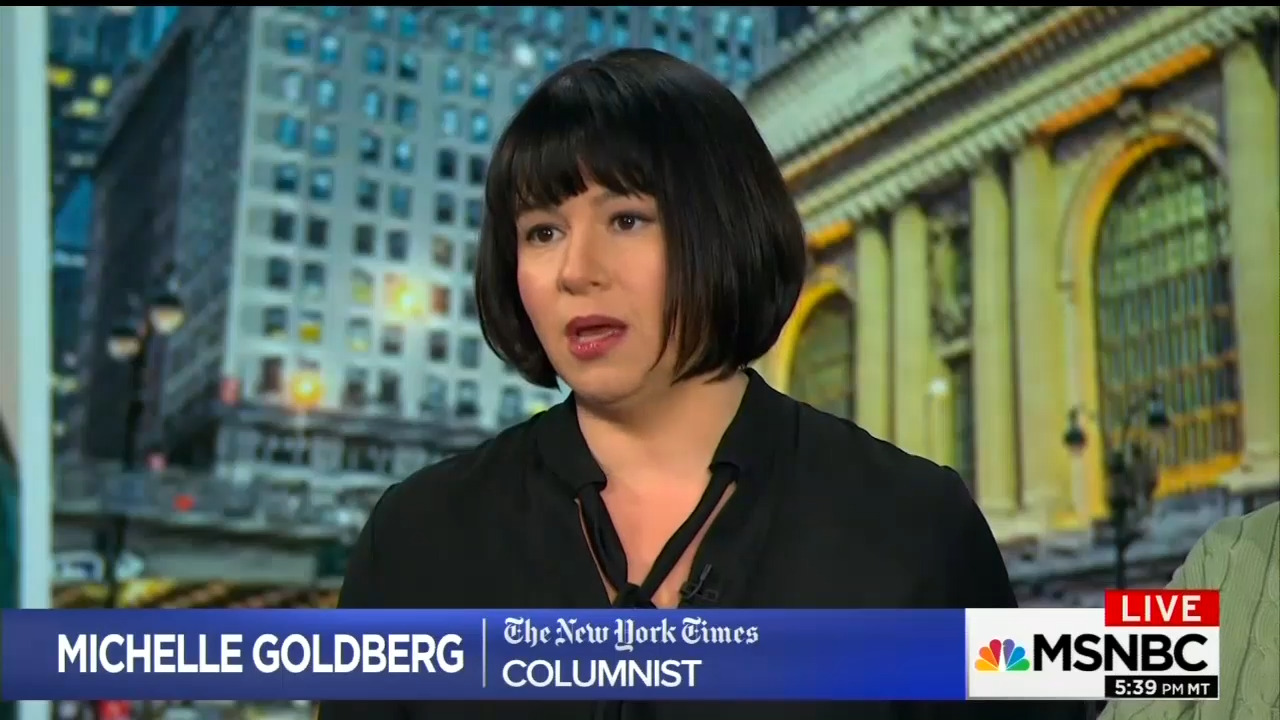 Most liberal opponents of President Trump have been shamed out of throwing around the word “collusion” willy-nilly, as Robert Mueller’s investigation plods along without throwing up much in the way of evidence thus far. But not columnist Michelle Goldberg of The New York Times, still flying the flag of “collusion,” while embracing domestic surveillance organizations from the left: “Truth vs. Power In the Russia Investigation” in Tuesday’s edition. The text box took the maximum possible paranoid position: “Are Republicans covering up evidence of collusion?”

The Times actually ran a decent story on the report itself, which included Republican criticism of the Clinton campaign’s “secretly paying for opposition research that included information from Russian sources.” But Goldberg cheerfully skipped Clinton in her screed:

On Friday, Republicans on the House Intelligence Committee released a report based on their cursory investigation into Russian interference in the 2016 election. Full of shoddy rationalizations and evasions, it purported to show that America’s intelligence community failed to use “proper analytic tradecraft” in concluding that Russia wanted to help elect Donald Trump, and that there is no evidence that the Trump campaign colluded with Russia. Its real message was that, for Republicans in Congress determined to protect this president, evidence is irrelevant.....making sense isn’t the point; the report’s function is to obscure reality, not illuminate it.

In reality, as the meticulous Democratic response to the Republican report makes clear, there’s already overwhelming evidence of the Trump campaign’s collusion with Russia. But as details of Trump’s Russia connections have dribbled out over the last year and a half, each revelation has led to a familiar, numbing cycle of shock, impotent anger, and, finally, resignation.

She dredged up a name of businessman Felix Sater, who has made quite a lot of astonishing if unverified claims over the years. But Goldberg rushed in.

....Imagine if we’d known then just a fraction of what we know now, like the November 2015 email exchange between Felix Sater, a Trump associate and convicted felon with ties to Russian organized crime, and the Trump lawyer Michael Cohen, recently the subject of an F.B.I. raid. Sater boasted, “Buddy, our boy can become president of the U.S.A. and we can engineer it. I will get all of Putin’s team to buy in on this.” We still don’t know what Sater meant by this. Republicans have shown a staggering lack of interest in finding out.

Yet Sater himself admitted he didn’t know Putin:

A litany of old news and old names followed: Paul Manafort, George Papadopoulos, Carter Page, the NRA. To explain away the seeming lack of broad concern among the public, she lamented that there was simply too much scandal for people to keep up with: “I can’t help thinking that it would be harder to explain away the Trump campaign’s treachery if we’d been forced to reckon with it all at once.”

Finding out more doesn’t matter because most elected Republicans have developed a paranoid loathing for the law enforcement and intelligence agencies they once revered....

And most elected Democrats -- and liberal writers like Goldberg -- have developed a bizarre love with domestic intelligence and surveillance agencies they would have once reviled.

Other names on Goldberg’s crush list include compromised former FBI director James Comey, former director of National Intelligence James Clapper, and former C.I.A. director John Brennan, all of whom are credibly accused of leaking and/or lying to the press, without consequence or anything in the way of oversight from a press that once found such things important.

Goldberg somehow found comedian Michelle Wolf to be “brave” for excoriating President Trump and especially his press secretary on personal terms at the White House Correspondent’s Dinner. She concluded:

Under Trump, the central battle in our culture is between truth and power. The truth hidden among the propaganda in the House Intelligence Committee’s majority report is that power is winning.

Because all “truth” can be found between the pages of a partisan Democratic rebuttal!