GQ Bashes Racist/Sexist Canon, EW Cheers Them On vs. 'Spew' of 'Angry Men on the Internet' 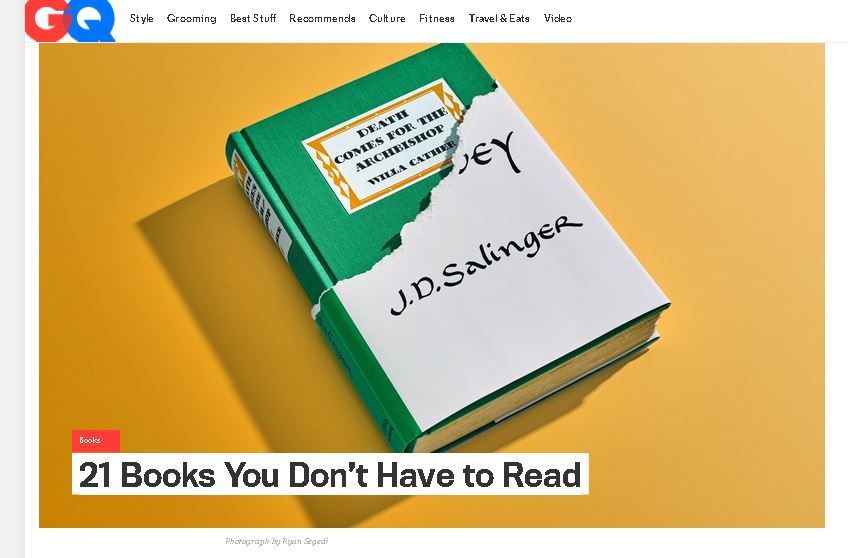 GQ magazine has attracted controversy with a pseudo-irreverent, provocative list in its May issue, "21 Books You Don't Have to Read Before You Die."

Some at MRC have already noted they dump on The Bible as "repetitive, self-contradictory, sententious, foolish, and even at times ill-intentioned."

One may actually agree with the placement of a few of the titles on the magazine’s list of overrated novels, and appreciate some of the suggested substitutions (there’s no accounting for taste) from the magazine’s contributors.

But the overarching tone is an ideology-first assault against the dreaded oeuvre of Dead (Racist/Sexist) White Males, with GQ gleefully ripping the reputation of books unjustly bolstered in the Western canon by white privilege. A smug, supportive review of the piece in Entertainment Weekly makes that angle clear.

GQ introduction to its takedown of the classics set the juvenile, hectoring tone.

....But a few pages into Bleak House, we realized that not all the Great Books have aged well. Some are racist and some are sexist, but most are just really, really boring. So we -- and a group of un-boring writers --give you permission to strike these books from the canon...

Writer Lauren Groff said books like the western Lonesome Dove by Larry McMurtry, had had its day.

I actually love Lonesome Dove, but I'm convinced that the cowboy mythos, with its rigid masculine emotional landscape, glorification of guns and destruction, and misogynistic gender roles, is a major factor in the degradation of America....

Goodbye to All That by Robert Graves, reviewed by Omar El Akkad, got docked for actually reflecting the racial views of 1920s England, when it was written.

Goodbye to All That, the autobiographical account of Graves's time in the trenches during World War I, is entertaining and enlightening. It's also incredibly racist...

He picked as his substitute Dispatches by Michael Herr, similar except, “It concerns a different time, country, and war....” Seriously?

Adventures of Huckleberry Finn by Mark Twain got two hits, the most vicious from writer Tommy Orange.

Mark Twain was a racist. Just read Adventures of Huckleberry Finn. He was a man of his time, so let's leave him there. We don't need him....”

Not even one of the last literary legends, Kurt Vonnegut, was exempt from ideological reconsideration, as his classic anti-war novel Slaughterhouse-Five was condemned by Nadja Spiegelman.

Dana Schwartz at Entertainment Weekly told everyone to relax, the online pushback against the list was just “sputter and spew” from “angry men on the internet.”

First of all, GQ knows they’re playfully trolling, just a bit. Most of the books -- like Blood Meridian, The Old Man and the Sea, Catcher in the Rye -- are passionate favorites of angry men on the internet, the most likely to sputter and spew in the comments on social media about how wrong these writers are and how they’ve misinterpreted Ernest Hemingway’s white male genius. Click, engage, link to the article in fury, and then click five more times while you’re getting the quotes right for your angry blog post.... Bringing attention to books that are less male, and less white, is not a bad thing after centuries of culture that reinforced that white male stories were the only ones which mattered.

Were GQ’s stable of contributors really being “playful” by condemning writers or another era for racism and sexism?