“The Trump Effect” included three anti-Trump entries in the list compiled by Chancellor Agard, referencing the shows Black-ish and Mr. Robot as well as the NFL protests (no link): 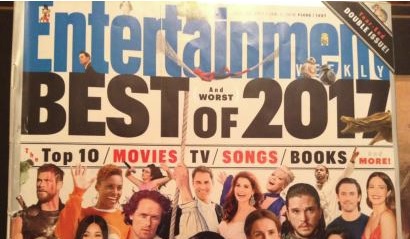 “Black-Ish Served Up Some Powerful ‘Lemons’” read, “Creator Kenya Barris penned and directed a sobering half hour that used the Johnson family to explore the disenfranchisement felt by half of the population after the election.”

“Mr. Robot Crafts Its Own Explanation For Trump’s Victory” read, “In the USA network thriller’s remarkable third season, the Dark Army, a cyberterrorist group led by BD Wong’s enigmatic Whiterose, plays a substantial role in getting Trump elected by hacking the DNC.”

“#TAKEAKNEE” read, “Football player Colin Kaepernick’s police-brutality protest began in 2016; however, the movement picked up steam this year when President Trump’s attacks on the NFL players who participated bolstered the movement and got widespread celebrity support.”

So “widespread” that NFL ratings tanked and the numbers protesting also suffered a sharp decline.

There was a full-page appreciation by Dan Snierson of Jimmy Kimmel, the late-night host turned anti-Republican scold: “Jimmy Kimmel: In Trying Times, The Late-Night Jester Became A Surprising – And Compelling – Voice Of Reason.”

The list of “The 5 Worst Shows Of The Year” featured as its No. 1# something called APB that aired on Fox: “A swaggering billionaire fixes America using social media. A lame procedural, and unconvincing propaganda for everything ruining the country any given week.”

One of “The Year’s Best Albums” was Damn by Kendrick Lamar. A write-up by Eric Renner Brown offered an unsolicited compliment to former President Obama: “Like the president who praised it, Lamar’s jazzy 2015 opus To Pimp a Butterfly was an unflinching but optimistic force of hope.’”

The No. 4 position in “The 5 Worst Books Of The Year” list was a memoir of Ivana Trump, President Trump’s first wife: “This hilariously terrible memoir is just bizarre enough to merit curiosity. Come for Ivana ranting about her furs, stay for her puzzling commentary on Taco Bell and Michael Jackson.”

The politicization of the Year in Review issue culminated with “The Year’s Best Podcasts.” No surprise that the one put together by staffers from the Obama White House, “Pod Save America,” came in first. Marc Snetiker gushed:

In 2017’s tumultuous climate, the nascent podcast shingle Crooked Media and its flagship program Pod Save America offered a light in the storm for Americans who at one time or another found themselves wondering, ‘Is anyone else going as crazy as I am?’ The former Obama staffers are wickedly sharp and wildly entertaining...