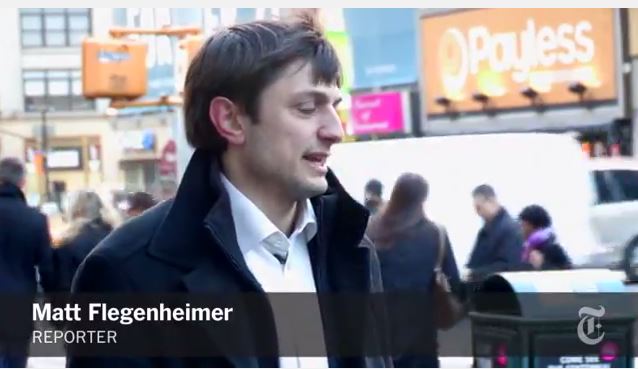 Flegenheimer has established a reporting pattern of loathing Republicans like Sen.Ted Cruz while basically worshipping liberal Democratic presidential hopefuls. He began his Saturday story with ill-concealed regret that the former president was no longer in the White House,

Really, eyewitness accounts from the period confirm this. It lasted nearly three weeks, it seems....

....Possibly around the time the president accused a female senator of doing “anything” for campaign contributions, touching off tremors in the #MeToo movement he helped inspire, and alleged another wide-scale conspiracy against him in the upper reaches of the F.B.I.

He gave Donald Trump perverse credit for all the headaches of 2017, a magician who can scramble citizens' brains, and then slipped in a cheap crack at a news rival, Fox News.

One year out, this may be Mr. Trump’s greatest trick: His tornado of news-making has scrambled Americans’ grasp of time and memory, producing a sort of sensory overload that can make even seismic events -- of his creation or otherwise -- disappear from the collective consciousness and public view.

He is the magician who swallows a sword no one thought was part of the act, stuffs a dozen rabbits into a hat before the audience can count them -- and then merrily tweets about Fox & Friends while the crowd strains to remember what show it had paid to attend in the first place.

Flegenheimer then consoled himself with a producer on a liberal Trump-bashing show.

“We get to the point where we’re just done dealing with something,” said Matt Negrin, a digital producer at The Daily Show, recalling unresolved maelstroms like Mr. Trump’s feud with a Gold Star widow, his baseless claim that Mr. Obama wiretapped him and his defense of white nationalist supporters amid the deadly violence this summer in Charlottesville, Va.

He predictably downplayed media misdeeds, in the most general terms.

Of course, Mr. Trump runs neither the networks nor the newspapers, much as he might prefer it at times, and the news media has come by its share of criticism honestly. Corralling the fire hose of White House doings has become a near-constant exercise in news judgment, with mixed returns.

Regular NewsBusters readers might disagree with his conception of NBC former anchor Tom Brokaw as a straight-shooter:

No one suggests the mandate is simple. Even Mr. Brokaw, a dean of meat-and-potatoes news delivery, allowed that the daily Trumpian churn is “not unimportant, and it’s got this Shakespearean quality about it.”

Mr. Negrin, from The Daily Show, has pursued social media performance art to combat the times, hoping to drill down on a single, elusive subject. His Twitter handle includes the number of days since Mr. Trump promised to clarify his position on Hezbollah within 24 hours -- a pledge, like many presidential utterances of nontrivial consequence, that went largely ignored in the typical swirl of the moment.

Mr. Negrin offered two predictions for the new year: Mr. Trump is unlikely to hold forth on Hezbollah anytime soon.

One suspects a strong ideological component as to why Flegenheimer feels the political world in 2017 was so awful.