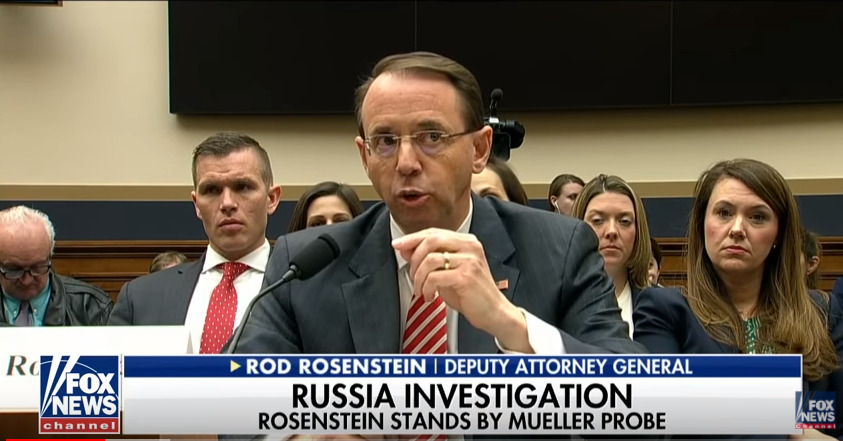 Deputy Attorney General Rod J. Rosenstein adamantly defended the character and impartiality of Robert S. Mueller III, the special counsel, as he came head-to-head on Wednesday with an increasingly aggressive campaign by Republicans to discredit the inquiry.

The Republicans’ effort received a fresh jolt from the release one night earlier of text messages exchanged last year between an F.B.I. agent, Peter Strzok, and an F.B.I. lawyer, Lisa Page, describing the possibility of an election victory by President Trump as “terrifying” and saying that Hillary Clinton “just has to win.” Mr. Mueller removed Mr. Strzok from the Russia investigation as soon as he learned of the texts, a step that Mr. Rosenstein praised.

Nonetheless, Republicans used the messages as fodder to attack the impartiality of Mr. Mueller during an appearance by Mr. Rosenstein before the House Judiciary Committee.

The Times stood by the Justice Department:

Instead, Mr. Rosenstein mounted a step-by-step defense of Mr. Mueller’s conduct. He noted that department rules prevented Mr. Mueller from taking political affiliation into consideration when hiring for career positions, and he distinguished between officials holding political views and making investigative decisions out of bias. He said Mr. Mueller would be careful not to allow the latter.

The Times failed to mention one very intriguing text between Strzok and Page:

I want to believe the path you threw out for consideration in Andy's office that there's no way he gets elected -- but I'm afraid we can't take that risk. It's like an insurance policy in the unlikely event you die before you're 40….

But the Times didn’t even mention it.

Mr. Mueller, a registered Republican appointed by President George W. Bush to direct the F.B.I., has long had critics in the most pro-Trump corners of the House and the conservative news media. But in recent weeks, as his investigation has delivered a series of indictments to high-profile associates of the president and evidence that at least two of them are cooperating with the inquiry, those critics have grown louder and in numbers.

Moreover, the voices of doubt are no longer confined to the party’s far-right wing. They include Republican mainstays like Senators Lindsey Graham of South Carolina and Charles E. Grassley of Iowa.

The Times at least listed other suspicious Justice Department evidence, though with its skeptical eyebrow raised high.

Democrats say the pattern is becoming clear: As Mr. Mueller moves closer to Mr. Trump’s inner circle, Republicans try to discredit federal law enforcement and undercut the eventual findings of the special counsel. The Republican effort may also be intended to blunt the political repercussions should Mr. Mueller be fired, Democrats say.

Wednesday’s lead editorial was harsher and dispensed with any sense of objectivity, ignoring the suspicious facts emanating from the Justice Department while personally mocking Fox News hosts as conspiratorial drunks in “Fox News v. Robert Mueller.” The text box: “The propaganda machine has kicked into high gear, and has a single goal: convincing President Trump to fire the special counsel.”

If only we could dismiss Sean Hannity, Jeanine Pirro, Laura Ingraham and the other well-paid propagandists at Fox News as though they were harmless drunks at the end of the bar, ticking off their conspiracy theories to anyone who will listen. Unfortunately, the guy sitting on the next stool is the president of the United States, and he’s all ears.

President Trump watches cable news for four to eight hours a day, according to a report in The Times last weekend. Mr. Trump has disputed that number, but not the fact that his TV diet consists overwhelmingly of Fox’s sycophants, who have now gathered around one insistent message aimed at their No. 1 fan: Fire Robert Mueller now.

So says the Obama sycophants at the New York Times.

The Times has actually covered this ground in news stories, resulting in the bizarre spectacle of one media outlet criticizing another outlet for actually reporting news.

To put it mildly, this is insane. The primary purpose of Mr. Mueller’s investigation is not to take down Mr. Trump. It’s to protect America’s national security and the integrity of its elections by determining whether a presidential campaign conspired with a foreign adversary to influence the 2016 election -- a proposition that grows more plausible every day.

And pay no attention to the partisan Justice Department:

When the propagandists say, “Get rid of Mueller,” it’s not the truth they’re trying to protect; it’s Mr. Trump himself. Any genuine interest in objective reality left the building a while ago, replaced by a self-sustaining fantasyland. If it’s hard to understand how roughly three-quarters of Republicans still refuse to accept that Russia interfered in the 2016 election -- a fact that is glaringly obvious to everyone else, including the nation’s intelligence community and Mr. Trump’s secretary of state, Rex Tillerson -- remember that a majority of the same people continue to believe that President Barack Obama was born in Kenya.

....On Monday night, according to Axios, Jay Sekulow, one of Mr. Trump’s personal lawyers, called for a special prosecutor to investigate … the special prosecutor. The tipping point? An article on Fox News’s website about a top Justice Department official’s wife and her work for Fusion GPS, the research firm behind the so-called Steele dossier.

The Times didn’t even address the newsworthiness of the story of Nellie Ohr, wife of Bruce Ohr, the recently demoted associate deputy attorney general at the Justice Department.

In August 1994 the editorial page actually called on Starr to resign two weeks after his appointment, in the subtly titled “Mr. Starr’s Duty to Resign.” When Starr failed to leave, it wrote in April 1999, under the headline “More Bad Advice From Ken Starr,” that “The most welcome aspect of Mr. Starr's testimony is that it may be a harbinger of his exit from public life.”