The mass shooting in Las Vegas has led to liberal media prodding for gun control, even infecting so called fact-checking features, like the recently established one in the New York Times. Resident checker Linda Qiu penned “Do More Guns Really Mean Fewer Gun Murders? Not Exactly.” 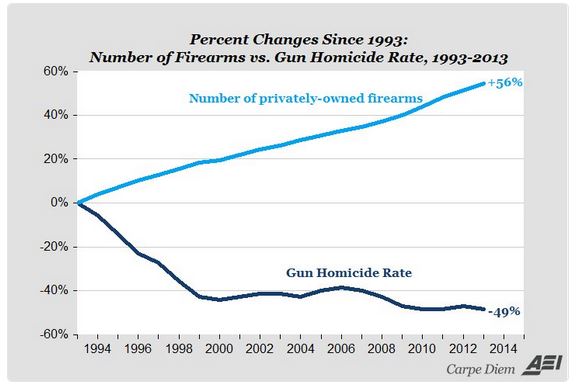 Qiu tried to refute a chart from the “conservative-leaning” American Enterprise Institute that suggested there was no positive correlation between gun ownership and gun homicide: “A few other statistics quickly puncture the chart’s suggested conclusion.” But “suggested conclusion” is a strawman, letting Qiu declare misleading an assertion that the (four-year-old) chart wasn’t making. An American Enterprise Institute article that accompanied the chart, which Liu failed to cite, did suggest (but not assert) a connection between higher rates of gun ownership and lower gun homicide rate, calling it a “possible reason.” Meanwhile, Hillary Clinton's statement about silencers and the NRA got sympathetic treatment.

The NYT’s online headline was worse: “Spurious Chart, Data on N.R.A. Spending Mislead in Gun Debate.” Again, Qiu’s own hand-picked experts found nothing wrong with the chart itself, but Qiu and her headline writer criticized it for its “suggested conclusion.”

In response to calls for more gun control and fewer guns, some have pointed to a chart published by the American Enterprise Institute, a conservative-leaning think tank in Washington, to argue that more guns don’t necessarily translate to more gun homicides.

The point that more permissive gun laws did not lead to a huge spike in gun violence has merits, said Adam Winkler, a Second Amendment expert at the University of California, Los Angeles. But the chart itself, he said, “is a bunch of hokey.”

The chart’s data on the spike in the number of firearms and the decline in the homicides by firearms are accurate. But there is no proof that these two trends are connected. Crime, whether or not committed with guns, has generally declined over the past two decades. Experts aren’t entirely sure why but do say the drop was is influenced by a host of economic, racial and demographic factors.

A few other statistics quickly puncture the chart’s suggested conclusion.

Did you get that part about the “suggested conclusion”?

Even Qiu’s refutation of the "suggested conclusion" fails to convince, must less make the chart “spurious”:

Qiu’s criticism of an offensively political Hillary Clinton tweet (conveniently left unreferenced in both Times headlines) was milder, at best incomplete and at worst misleading. Qiu also assumed the subject was making an argument not cited, but this time in favor of the gun-control advocate Hillary Clinton. Under the mild subhead “The impact of gun silencers can be overstated,” Qiu wrote:

Among the calls for tougher gun restrictions, Hillary Clinton tweeted on Monday to criticize a House bill that would make it easier to purchase gun silencers. “Imagine the deaths if the shooter had a silencer, which the N.R.A. wants to make easier to get,” Mrs. Clinton wrote the day after the massacre in Las Vegas.

Mrs. Clinton has a point that suppressors also make it harder to tell where gunshots are coming from, especially as was the case during the concert in Las Vegas, with its blaring music.

Where did Clinton actually make the above “point”? Qiu doesn’t cite or link to a Clinton statement, and a news search was unable to uncover a Clinton statement on Las Vegas beyond the tweet, which of course said nothing about being able to tell where gunshots are coming from.