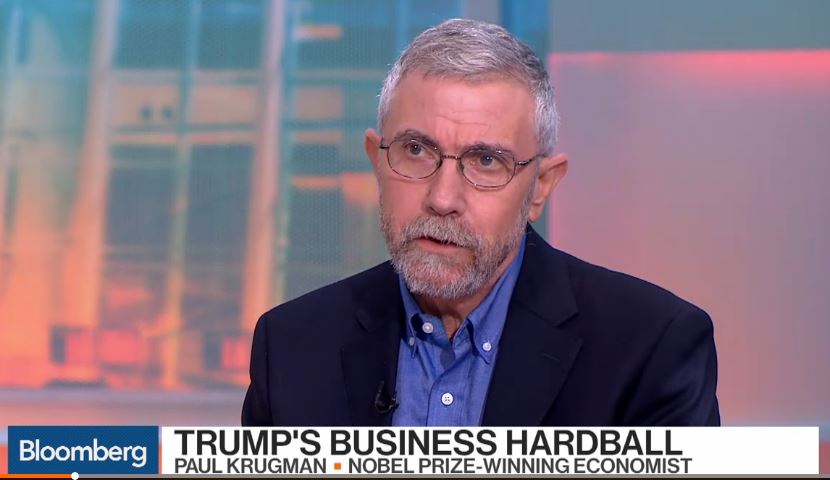 The New York Times classless columnist Paul Krugman eagerly swallowed the mainstream media distortion of comments conservative radio host Rush Limbaugh made on his program as Hurricane Irma approached to snidely dismiss him as a “terrible person” in “Conspiracies, Corruption And Climate” on Monday. Krugman extended his assault to conservatives and Republicans in general as demonstrated by the column’s text box: “It’s not just Rush: know-nothings are running America.”

After the devastation wreaked by Harvey on Houston -- devastation that was right in line with meteorologists’ predictions -- you might have expected everyone to take heed when the same experts warned about the danger posed by Hurricane Irma. But you would have been wrong.

On Tuesday, Rush Limbaugh accused weather scientists of inventing Irma’s threat for political and financial reasons: “There is a desire to advance this climate change agenda, and hurricanes are one of the fastest and best ways to do it,” he declared, adding that “fear and panic” help sell batteries, bottled water, and TV advertising.

So what should we learn from Limbaugh’s outburst? Well, he’s a terrible person -- but we knew that already. The important point is that he’s not an outlier. True, there weren’t many other influential people specifically rejecting warnings about Irma, but denying science while attacking scientists as politically motivated and venal is standard operating procedure on the American right. When Donald Trump declared climate change a “hoax,” he was just being an ordinary Republican.

And thanks to Trump’s electoral victory, know-nothing, anti-science conservatives are now running the U.S. government. When you read news analyses claiming that Trump’s deal with Democrats to keep the government running for a few months has somehow made him a moderate independent, remember that it’s not just Pruitt: Almost every senior figure in the Trump administration dealing with the environment or energy is both an establishment Republican and a denier of climate change and of scientific evidence in general.

Why are U.S. conservatives so willing to disbelieve science and buy into tinfoil-hat conspiracy theories about scientists? Part of the answer is that they’re engaged in projection: That’s the way things work in their world.

And right-wing politicians harass and persecute actual researchers whose conclusions they don’t like -- an effort that has been vastly empowered now that Trump is in power. The Trump administration is disorganized on many fronts, but it is systematically purging climate science and climate scientists wherever it can.

So as I said, when people like Limbaugh imagine that liberals are engaged in a conspiracy to promote false ideas about climate and suppress the truth, it makes sense to them partly because that’s what their friends do.

And Paul Krugman uses national tragedies like 9-11 and the shooting of Rep. Gabrielle Giffords to attack Republicans, because that’s just the kind of person he is.

As for the attacks on Limbaugh, they don’t hold up. Newsbusters editor Tim Graham actually read the show transcript and quoted Limbaugh: “All you need is to create the fear and panic accompanied by talk that climate change is causing hurricanes to become more frequent and bigger and more dangerous, and you create the panic, and it’s mission accomplished, agenda advanced....” Refuting a hostile characterization of Rush’s comments by NBC weatherman Al Roker, Graham pointed out that “Nowhere did Limbaugh say Hurricane Irma was ‘fake’ or ‘not a dangerous storm.’ He never told anyone to ‘ignore’ the forecasts.”

Krugman concluded with his typical subtlety and understatement.

The bottom line is that we are now ruled by people who are completely alienated not just from the scientific community, but from the scientific idea -- the notion that objective assessment of evidence is the way to understand the world. And this willful ignorance is deeply frightening. Indeed, it may end up destroying civilization.